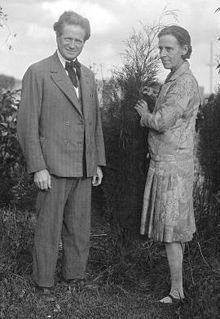 Walter Burley Griffin and Marion Mahony Griffin, in Sydney in 1930

Watercolor from the Canberra Design

Marion Griffin (February 14, 1871 – August 10, 1961) was an American architect and artist. She was one of the first licenced female architects in the world, and is considered an original member of the Prairie School.[1]

Marion Mahony Griffin was born in Chicago, Illinois, the second child and eldest daughter of the five surviving children of Jeremiah Mahony, a journalist from Cork, Ireland, and Clara Hamilton, a schoolteacher. She graduated from the Massachusetts Institute of Technology (M.I.T.) in 1894, where she studied with Constant-Désiré Despradelle.[2] Mahony went to work the next year in the Chicago studio of Frank Lloyd Wright, designing buildings, furniture, stained glass windows and decorative panels.[3] She would be associated with Wright's studio for almost fifteen years and was an important contributor to his reputation, particularly for the influential Wasmuth Portfolio, for which Mahony created more than half of the numerous renderings. Architectural writer Reyner Banham called her the "greatest architectural delineator of her generation". Her rendering of the K. C. DeRhodes House in South Bend, Indiana was praised by Wright upon its completion and by many critics.[4]

Wright understated the contributions of others of the Prairie School, Mahony included. Unfortunately, the views of most architectural historians from the 1950s to 2000 follow Wright's lead. A clear understanding of Marion Mahony’s contribution to the architecture of the Oak Park Studio comes from Wright’s son, John Lloyd Wright, who says that William Drummond, Francis Barry Byrne, Walter Burley Griffin, Albert Chase McArthur, Marion Mahony, Isabel Roberts and George Willis were the draftsmen--the five men and two women who each made valuable contributions to Prairie style architecture for which Wright became famous.[5] During this time Mahony designed the Gerald Mahony Residence (1907) in Elkhart, Indiana for her brother and sister-in-law.[6]

When Wright eloped to Europe with Mamah Borthwick Cheney in 1909, he offered the Studio's work to Mahony. She declined. But after Wright had gone, Hermann V. von Holst, who had taken on Wright's commissions, hired Mahony with the stipulation that she would have control of design.[7] In this capacity, Mahony was the architect for a number of commissions Wright had abandoned. Two examples were the first (unbuilt) design for Henry Ford's Dearborn mansion, Fair Lane and the Amberg House in Grand Rapids, Michigan.

Mahony recommended Griffin to von Holst to develop landscaping for the area surrounding the three houses commissioned from Wright in Decatur, Illinois. Mahony and Griffin worked on the Decatur project before their marriage. After their marriage, Mahony worked in Griffin's practice. A Walter Burley Griffin/Marion Mahony designed development that is home to an outstanding collection of Prairie School dwellings, Rock Crest Rock Glen in Mason City, Iowa, is seen as their most dramatic American design development of the decade. It is the largest collection of Prairie Style homes surrounding a natural setting.

Mahony and Walter Burley Griffin married in 1911, a partnership that lasted 28 years. Griffin was a fellow architect, a fellow ex-employee of Wright, and a leading member of the Prairie School of architecture. Marion's watercolor perspectives of Walter's design for Canberra, the new Australian capital, were instrumental in securing first prize in the international competition for the plan of the city. In 1914 the couple moved to Australia to oversee the building of Canberra. Marion managed the Sydney office and was responsible for the design of their private commissions.[8] They pioneered the Knitlock construction method, inexactly emulated by Wright in his California textile block houses of the 1920s.

Later the Griffins practiced in India and, in less than a year, Mahony oversaw the design of over one hundred Prairie School influenced buildings there.[9] Walter Griffin died in India in 1937 of peritonitis following a cholecystectomy. Mahony then completed their work and returned to the United States. Mahony and Griffin spread the Prairie Style to two continents, far from its origins. She credited Louis Sullivan as the impetus for the Prairie School philosophy. She considered Wright's habit of taking credit for the movement explained its early death, in the United States.[10]