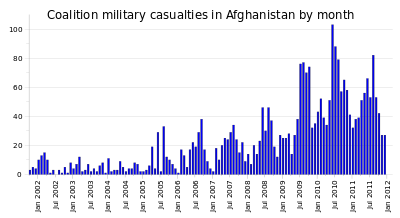 Coalition fatalities per month since the start of the war.[1]

As of November 20, 2011, there have been 2,735 coalition deaths in Afghanistan as part of ongoing coalition operations (Operation Enduring Freedom and ISAF) since the invasion in 2001.[1] In this total, the American figure is for deaths "In and Around Afghanistan" which, as defined by the U.S. Department of Defense, includes some deaths in Pakistan and Uzbekistan[2] and the deaths of 12 CIA operatives.[3]

In addition to these deaths in Afghanistan, another 31 U.S. and one Canadian soldier were killed in other countries while supporting operations in Afghanistan. The total also omits the 62 Spanish soldiers returning from Afghanistan who died in Turkey on May 26, 2003, when their plane crashed.

During the first five years of the war, the vast majority of coalition deaths were American, but between 2006 and 2011, a significant proportion were amongst other nations, particularly the United Kingdom and Canada which have been assigned responsibility for the flashpoint provinces of Helmand and Kandahar, respectively. This is because in 2006, ISAF expanded its jurisdiction to the southern regions of Afghanistan which were previously under the direct authority of the U.S. military. As Robert Gates pointed out on June 10, 2011, in his "last policy speech" as U.S. Secretary of Defense, "more than 850 troops from non-U.S. NATO members have made the ultimate sacrifice in Afghanistan. For many allied nations these were the first military casualties they have taken since the end of the Second World War."[4] Additionally, there have been 57 fatalities among troops from the non-NATO contributors to the coalition (Australia, Sweden, Finland, Georgia, South Korea, Jordan and New Zealand).

With 711 Operation Enduring Freedom and International Security Assistance Force (ISAF) deaths, 2010 was the deadliest year for foreign military troops since the U.S. invasion in 2001, continuing the trend that has occurred every year since 2003.[1]

Details regarding the fatalities

Of the United States deaths, more than 1,455 have died in hostile action. Included in these numbers are 12 CIA operatives that were killed in Afghanistan: seven in a suicide bomb attack on a military base, two in an ambush, one in a shooting attack at the U.S. embassy in Kabul, one in a prison uprising in November 2001, and one in an accident.[3] The independent website iCasualties has put the number of U.S. deaths at 1,765.[10] This number is by 15 higher than the Department of Defense's tally which is 1,750, when including the intelligence operatives.[11]

The Australian forces in Afghanistan have suffered 32 fatalities. 213 soldiers have been wounded.[12]

As of November 20, 2011, the British forces have suffered 389 fatalities and 1,817 wounded in action, another 3,531 have suffered from disease or non-battle injuries. Of these, 345 soldiers were killed as a result of hostile action, while 44 are known to have died either as a result of illness, non-combat injuries or accidents, or have not yet officially been assigned a cause of death pending the outcome of an investigation.[13][14] The vast majority of fatalities have taken place since the redeployment of British forces to the Taliban stronghold of Helmand province in 2006, as only five men died between April 2002 and early March 2006.

Canada's role in Afghanistan, consisting of operations against the Taliban and other insurgents in southern Afghanistan (Kandahar Province), has resulted in the largest number of fatal casualties for any single Canadian military mission since the Korean War. A total of 157* members of the Canadian Forces have died in Afghanistan between February 2002 and October 29, 2011. Of these, 132 were due to enemy actions, including 97 due to IEDs or landmines, 22 due to RPG, small arms or mortar fire, and 13 due to suicide bomb attacks. Another six Canadian soldiers died due to friendly fire while conducting combat operations. An additional 19 Canadian soldiers have died in Afghanistan as a result of accidents or non-combat circumstances; 6 in vehicle accidents, 3 unspecified non-combat-related deaths, 3 suicide deaths, 2 in a helicopter crash, 2 from accidental falls, 2 from accidental gunshots and 1 death from an illness.[15][16] 615 soldiers have been wounded in action and 1,244 have received non-battle injuries since April 2002.[17]

In addition to these troop deaths in Afghanistan, 1 Canadian soldier was found dead of non-combat-related causes at Camp Mirage, a forward logistics base in the United Arab Emirates near Dubai.

Denmark, a NATO member, has about 750 troops in Afghanistan, mostly stationed in Helmand province as part of NATO's International Security and Assistance Force (ISAF).

Denmark's first three deaths were the result of an accident during the disposal of a Soviet-era anti-aircraft missile in 2002. With a new mandate issued by the Danish parliament in 2006, Danish military operations have transformed from relatively safe non-combat operations in the centre of the country to combat operations alongside the British contingent in the violent southern Helmand province. 34 soldiers have been killed in various hostile engagements or as a result of friendly fire, and 7 have been killed in non-combat related incidents, bringing the number of Danish fatalities to 41.[19][20] More than 100 soldiers have been wounded in action.[21]

A total of 25 Dutch servicemen were killed in Afghanistan.[22] The first two Dutch fatalities were soldiers killed in an accidental helicopter crash in 2006. Since then, one pilot died in a non-hostile F-16 crash, and one soldier committed suicide at Kamp Holland. In 2007, one soldier was accidentally killed when a Patria armoured vehicle overturned at a river crossing near Tarin Kowt in Uruzgan. After that 19 soldiers were killed in action between 2007 and 2010. Finally, the last soldier to die was from an illness a month before the contingent withdrew from the country in December 2010. 140 soldiers were wounded in action.[23]

A total of 76 French soldiers have died thus far.[25] 58 soldiers have been killed in action, of the others: seven have died in vehicle accidents, one in a helicopter crash, two committed suicide, two have drowned, one was killed by a lightning strike, two died from a non-hostile gunshot wound, one died in an accidental explosion, one died in friendly fire, and one died of unknown causes.

Georgia has thus far suffered 10 deaths and 38 injuries.[26][27] The first Georgian fatality occurred on September 5, 2010, when 28 years old colonel Mukhran Shukvani was killed in an IED attack. Corporal Alexandre Gitolendia was also seriously wounded in the attack, bringing Georgian casualties to 1 KIA and 1 WIA.[28] Four more Georgian soldiers were killed by a landmine during combat operations on October 1, 2010, in Helmland.[29] On February 21, 2011 Georgia lost another soldier, George Avaliani, while two others were wounded.[30] On March 14, 2011, one of the two injured died in a hospital in Germany and on May 27, 2011 another soldier died. On June 21 a ninth Georgian soldier died of injuries sustained during an attack.[31][32][33] On August 31, 2011, junior sergeant Rezo Beridze got killed by sniper fire during a patrol mission, bringing the total fatal casaulties of the Republic of Georgia to 10. [34]

A total of 53 German soldiers and 3 police officers were killed. 245 service personnel have been wounded in action.[35]

Seven Hungarians died in Afghanistan. Two EOD members were killed by IEDs. Two were killed in a convoy attack by the Taliban. Two died in a vehicle accident during a convoy-escort task. One died because of heart attack.

A total of 44 Italians have died in Afghanistan: 31 killed in action (one died a week after being wounded during a raid to rescue him after being captured), seven died in vehicle accidents, two of a heart attack, one due to an accidental weapon discharge, one of illness, one in an accidental airplane crash and one committed suicide.[36][37]

A member of the Jordanian spy agency Dairat al-Mukhabarat al-Ammah, was killed in the Forward Operating Base Chapman attack. Also, a Jordanian soldier was killed and three were wounded while escorting a humanitarian convoy in Logar province on May 22, 2011.[38]

Two New Zealand soldiers have been killed in Bamyan Province. The first soldier to be killed was Lieutenant Timothy O'Donnell who was killed after his convoy was ambushed on a notorious stretch of road in the province. The second soldier to be killed was Private Kirifi Mila when the Humvee he was in rolled down a 30-metre cliff. A member of the New Zealand SAS was killed in Kabul on 18 August 2011.[39] Another memeber of the New Zealand SAS was killed on 27 September 2011 in Wardak province.

10 Norwegian soldiers have been killed in action in Afghanistan.[40]

29 Polish soldiers (including a military civilian medic) have been killed in action, one died in a vehicle accident and one died due to a non-combat cause.[41] At least 100 soldiers have been wounded in action.[42]

Five Swedish soldiers have been killed in action since 2005. Three in two separate IED incidents and two in a ambush by a ANP uniform wearing insurgent. Several local translators working with the Swedish PRT have been killed.

Of the Spanish deaths, 17 died in August 2005 when the Eurocopter Cougar helicopter they were travelling in crashed, 12 were killed in separate attacks by insurgents, two died from natural causes, and two died in vehicle accidents. Another 62 died in a Yak-42 plane crash in Turkey on their way back to Spain from Afghanistan.[46]

A South Korean officer was shot by a fellow officer for not following an order to speak quietly on the telephone.[47] Another South Korean soldier, Sergeant Yoon Jang-ho, was killed in a suicide bomb attack at Bagram Air Base.[48]

The Turkish Army suffered its first deaths on July 14, 2009, when two soldiers were killed in a road traffic accident in Faryab province, between Mazar-i Sharif and Kabul. One of the two killed was the commander of the Turkish contingent of ISAF troops in Afghanistan.[49]

Out-of-country deaths related to the war

In addition to the 1,765 American deaths in Afghanistan, Pakistan and Uzbekistan, another 31 U.S. soldiers died in: Kuwait, Bahrain, Saudi Arabia, United Arab Emirates, Qatar, Germany, Turkey, the Arabian sea, the Persian Gulf, the Red Sea and the Mediterranean, while supporting operations in Afghanistan. Among them are also a Marine, a civilian DoD employee and two military airmen who were killed in action while supporting Operation Enduring Freedom.[1][11][50][51][52]

A Canadian soldier was found dead of non-combat-related causes at a forward logistics base in the United Arab Emirates near Dubai.

62 Spanish soldiers died in a Yak-42 plane crash in Turkey on their way back to Spain from Afghanistan.[46]