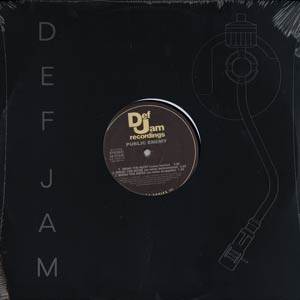 "Bring the Noise"'s , most of which are delivered rapid-fire by with interjections from , include boasts of Public Enemy's prowess, an endorsement of leader , retorts to unspecified s, and arguments for as a legitimate on par with rock. The lyrics also have a remarkable metrical complexity, making extensive use of meters like . The title phrase appears in the song's chorus. The song also gives several shoutouts to artists like , , and, unusual for a rap group, thrash metal band Anthrax, allegedly because Chuck D was flattered about wearing Public Enemy shirts while performing Anthrax gigs.

The song's production by , which exemplifies their style, features a dissonant mixture of samples, patterns, record by DJ Terminator X, siren s and other industrial .

The recording begins with a sample of 's voice saying "Too black, too strong" repeatedly.

Used as a sample

"Much More" by , "Everything I Am" by , and "Here We Go Again" by all sample Chuck D's voice saying "Here we go again" in "Bring the Noise". His exclamation "Now they got me in a cell" from the first verse of the song is also sampled in the song "". The track, 'Undisputed', from the 1999 album "" by samples Chuck D's voice saying "Once again, back, its the incredible" in its chorus and also features an appearance from Chuck D himself. Also, the game "" samples the beginning of "Bring the Noise" in the music for the final boss battle.

In Public Enemy recorded a new version of "Bring the Noise" in a collaboration with the band Anthrax. Chuck D has stated that upon the initial request of Anthrax, he "didn't take them wholehearted seriously", but after the collaboration was done, "it made too much sense".

In , "Bring the Noise" was ed by house DJ as well as . Benassi's remix slowed the track down, and cut off many of the lyrics. Benassi mixed two versions of the song. The Pump-kin version exemplies a heavy melody, while the S-faction edit added more emphasis to the bassline. The S-faction version won a Grammy for best remixed recording at the . Ferry Corsten only mixed one version which was released around the same time as Benny Benassi's remixes, it was released , on .In , also released a track called "Quoting", which is a remix made by him of "Bring the Noise". He made it in the bass line of a style created by him, similar to hard style but slower and harder.

The group covered "Bring the Noise" with on the "" .