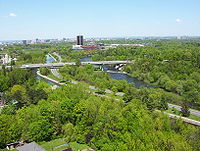 Colonel By Drive between the Rideau Canal and Rideau River near Carleton University. Also in view: Downtown Ottawa and the Laurentian mountains

Colonel By Drive (French: Promenade Colonel By) is an 8.1 km (5.0 mi) long scenic parkway in Ottawa, Ontario, Canada. It runs along the Rideau Canal from the end of Sussex Drive at Rideau Street. It then continues 8 km (5.0 mi) south and west to Hog's Back Road, winding through several residential areas and going past Dow's Lake and Carleton University. To the north, the road passes Department of National Defence Headquarters, the Ottawa Congress Centre and the Westin Hotel before ending at Wellington Street and Rideau Street The rear door of the Government Conference Centre can be accessed from the street as well, after it passes under the Mackenzie King Bridge. It is named for Colonel John By, who built the Rideau Canal. The winding two-lane road has a speed limit of 60 km/h (37 mph).

For many decades the area east of the canal had held Ottawa's main rail lines connecting to the Ottawa Train Station near the northern end of the canal. In the mid-1960s the train station was controversially relocated about 3 km (1.9 mi) southeast in an industrial area in the east end of the city, leaving the area on the eastern bank of the canal open for development. The National Capital Commission thus decided to create a scenic parkway. The Queen Elizabeth Driveway, another scenic Canadian parkway, already served the same purpose on the other side of the canal.

Like the adjacent Queen Elizabeth Driveway on the other side of the canal, pedestrians and bicycles are a common sight on the paths running alongside Colonel By. Every Sunday, during the summer months, Colonel By is closed to motor vehicle traffic so that bicycles and pedestrians can have the road to themselves.