The earliest records of Mottingham are from 862 AD when it was recorded as Modingahema, which means the land of Moda's people and is commonly interpreted as - "the proud place". 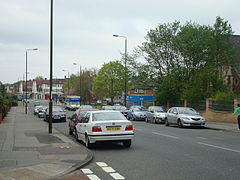 Mottingham was originally a hamlet in Eltham parish, in the Blackheath hundred of Kent. In 1840 it was included in the Metropolitan Police District by the Metropolitan Police Act 1839. A key year in the history of Mottingham was 1866, when the area became connected to the railway system with the construction of Mottingham station (then known as Eltham station). Also in 1866, Mottingham received separate civil parish status,[1] thus separating itself from Eltham. In 1881 the parish had a population of 779 and covered an area of 642 acres (2.60 km2).

When the County of London was created in 1889, Mottingham was excluded from the new county and now formed a protrusion of Kent, bordering London to the west, north and east. From 1894 to 1934 it formed a detached part of the Bromley Rural District.[2] In 1931 the parish had a population of 2,120. In 1934 the rural district and the Mottingham civil parish were abolished and the area was transferred to Chislehurst and Sidcup Urban District.[3] In 1965 the urban district was abolished and the area was transferred from Kent to Greater London, to form part of the London Borough of Bromley. The boundary between Bromley and Greenwich,[4] and between Bromley and Lewisham,[5] around Mottingham was adjusted in 1994.

The first church in Mottingham was St Andrews Church on Court Road and was established in 1884, which further helped establish Mottingham as separate from Eltham. A local landmark is Eltham College, a private school founded in 1842 as the London Missionary Society's School for the Sons of Missionaries, which moved to its present site in Mottingham in 1912. The famous cricketer, Dr W. G. Grace lived in retirement for some years in Mottingham and a blue plaque marks his residence, 'Fairmount' in Mottingham Lane, where he died on 23 October 1915. He was buried in Beckenham Crematorium.