Committee for the Liberation of the Peoples of Russia

Committee for the Liberation of the Peoples of Russia 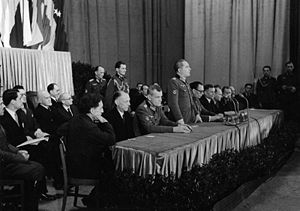 Manifestation of the Committee in Berlin, November 1944. 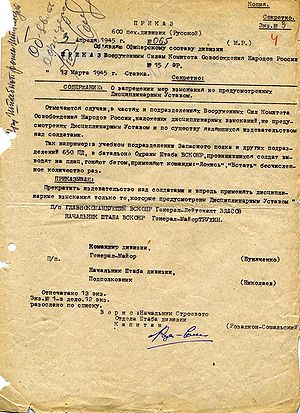 The Committee for the Liberation of the Peoples of Russia (in Russian: Комитет Освобождения Народов России, abbreviated as КОНР, KONR) was a committee composed of military and civilian anticommunists from territories of the Soviet Union (most being Russians). It was founded with the approval and sponsorship of Germany on November 14, 1944, in German-controlled Prague (purposely chosen because it was a Slavic city that was still not under Soviet control).

The committee's stated goals were

The committee sought to overthrow the regime of Joseph Stalin in the Soviet Union via an independent liberation army, which would be armed by and work in alliance with Germany. The committee expressed its support for the creation of a new more-or-less democratic government in Russia. The goals of the committee were embodied in a document known as the Prague Manifesto. The manifesto's fourteen points guaranteed the freedom of speech, press, religion, and assembly, as well as a right to self-determination of any ethnic group living in territories belonging to Russia (the same rights were already guaranteed by the text of the Soviet Constitution). At the same time official ideology of Nazi Germany considered Slavic people inhabiting majority of Soviet Union to be subhumans.

The Prague Manifesto did not contain any anti-semitic or otherwise racially inspired rhetoric, which caused a conflict with many Nazi propagandists. To appease the latter, the manifesto's authors agreed to include a criticism aimed at the Western Allies in the manifesto's preamble.

The "exploiters" referred to in the stated goals of the committee were capitalists and political allies of what was called "plutocracy".

After the surrender of Germany to the Allies, the committee ceased to operate—its members rechanneling their energy towards saving the Russian Liberation Army and other former Soviet citizens who had collaborated with the Axis Powers from forced repatriation to the Soviet SMERSH.[clarification needed] During the immediate post war period, several new organizations sprung up that intended to continue the committee's goal of fighting communism (i.e., The Union of the St. Andrew Flag; the Committee of United Vlasovites, or Vlasovtsy, followers of Vlasov; the Union of Battle for the Liberation of the Peoples of Russia), started by veterans of the committee and the Russian Liberation Army who managed to escape forced repatriation to the Soviets. Two latter organizations participated in US-led efforts to form a united anti-Soviet platform of SOviet emigres.

According to NTS author Boris Prianishnikov, Vlasov had personally given the chairman of NTS, Victor Baidalakov, the written authority to preside over the Committee upon his absence/disappearance, but Baidalakov did not act upon this mandate.

In the United States an organization with a similar name, the American Committee for the Liberation of the Peoples of Russia, was founded in the late 1940s, and became known for their CIA-run and later Congress-funded propaganda broadcaster Radio Liberty, which operated from Munich, in West Germany.