Life Savers
This article is about the candy. For other uses, see Life saver (disambiguation).

Life Savers is an American brand of ring-shaped mints and artificially fruit-flavored hard candy. The candy is known for its distinctive packaging, coming in aluminum foil rolls.

In 1912, candy manufacturer Clarence Crane of Cleveland, Ohio,[1] invented Life Savers as a "summer candy" that could withstand heat better than chocolate. The candy's name is derived from its similarity to the shape of lifebuoys used for saving people who have fallen from boats. The name has also inspired an urban legend that Crane invented the candy to prevent children from choking, due to his own child having choked on a hard candy.[2]

After registering the trademark, Crane sold the rights to the peppermint candy to Edward John Noble for $2,900. Instead of using cardboard rolls, which were not very successful, Noble created tin-foil wrappers to keep the mints fresh. Pep-O-Mint was the first Life Savers flavor. Noble founded the Life Savers Candy Company in 1913 and significantly expanded the market for the candy by installing Life Savers displays next to the cash registers of restaurants and grocery stores. He also trained the owners of the establishments to always give customers a nickel in their change as doing so would increase sales of Life Savers.[citation needed] Since then, many different flavors of Life Savers have been produced. The five-flavor roll first appeared in 1935.

Life Savers was a subsidiary of Kraft Foods before being purchased by the Wrigley Company in 2004. In recent years, the brand has expanded to include Gummi Savers (currently known as Life Savers Gummies) in 1992, Life Saver Minis in 1996, Creme Savers in 1998, and Life Saver Fusions in 2001. Discontinued varieties include: Fruit Juicers, Holes, Life Saver Lollipops (still sold in carnival wheel games in Seaside Heights, New Jersey) and Squeezit. 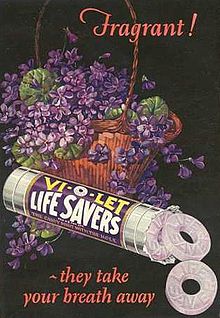 Life Savers candy was first created in 1911 by Clarence Crane, a Cleveland, Ohio, candy maker and father of the famed poet Hart Crane. Crane developed a line of hard mints but did not have the space or machinery to make them. He contracted with a pill manufacturer to press the mints into shape. The pill manufacturer, whose machinery was malfunctioning, found that the pressing process worked much better when the mints were stamped with a hole in the middle.

In 1913, Crane sold the formula for his Life Savers candy to Edward Noble for $2,900. Noble started his own candy company and began producing and selling the mints known as Pep-O-Mint Life Savers. He also began to package the mints into rolls wrapped in tinfoil to prevent them from going stale. This process was done by hand until 1919 when machinery was developed by Edward Noble's brother, Robert Peckham Noble, to streamline the process.

Robert Peckham Noble, Edward Noble's brother and Purdue educated engineer, took his younger brother's entrepreneurial vision and designed and built the manufacturing facilities needed to expand the company. The Lifesavers primary manufacturing plant was located in Port Chester, New York. Robert P. Noble led the company as its Chief Executive Officer and primary shareholder for more than 40 years, until selling the company in the late 1950s.

By 1919, six other flavors (Wint-O-Green, Cl-O-ve, Lic-O-Riche, Cinn-O-Mon, Vi-O-let and Choc-O-Late) had been developed, and these remained the standard flavors until the late 1920s. In 1920, a new flavor called Malt-O-Milk was introduced. This flavor was received so poorly that it was discontinued after only a few years.[3] In 1925, the tinfoil was replaced with aluminum foil.

In 1921, the company began to produce solid fruit drops. In 1925, technology improved to allow a hole in the center of the fruit candies. These were introduced as the "fruit drop with the hole" and came in three flavors, namely, Orange, Lemon and Lime, each of which were packaged in their own separate rolls. In contrast to the opaque white mints previously produced by the company, these new candies were crystal-like in appearance. These new flavors quickly became popular with the public. Three new flavors were quickly introduced, namely, anise, butter rum, cola and root beer, which were made in the clear fruit drop style. These did not prove to be as popular as the original four fruit drop flavors. In 1931, the Life Savers "Cough Drop" was introduced with menthol but it was not successful. In 1931, rolls of pineapple and cherry fruit drops were also introduced. As the public response proved positive for these, a new variety of mint, called Cryst-O-Mint, made in this same crystal-like style was introduced in 1932. In 1935, the classic "Five-Flavor" rolls were introduced, offering a selection of five different flavors (pineapple, lime, orange, cherry, and lemon) in each roll.[4] This flavor lineup was unchanged for nearly 70 years, until 2003, when three of the flavors were replaced in the United States, making the rolls pineapple, cherry, raspberry, watermelon, and blackberry.[5] However, orange was subsequently reintroduced and blackberry was dropped. The original five-flavor lineup is still sold in Canada. In the late 1930s and early 1940s, four new mint flavors were introduced: Molas-O-Mint, Spear-O-Mint, Choc-O-Mint and Stik-O-Pep.

In 1981, Nabisco Brands Inc. acquired Life Savers from the E.R. Squibb Corporation. A number of early mint flavors, including Cl-O-Ve, Vi-O-Let, Lic-O-Rice and Cinn-O-Mon were discontinued due to poor sales. Nabisco introduced a new Cinnamon flavor ("Hot Cin-O-Mon") as a clear fruit drop type candy. This replaced the white mint flavor Cinn-O-Mon which had recently been discontinued. The other original mint flavors have never been revived except by Wrigley (although a mint similar to Vi-O-Let Life Savers continues to be manufactured by C. Howard). A number of other flavors were also quickly discontinued, after Nabisco took over, in order to make the business more profitable. In 2004, the USA Life Savers business was acquired by Wrigley's. Wrigley's introduced two new mint flavors (for the first time in over sixty years) in 2006: Orange Mint and Sweet Mint. They also revived some of the early mint flavors (such as Wint-O-Green).

Life Savers production for North America was based in Holland, Michigan, United States, for many years, but in 2002 production was moved to Montreal, Québec, Canada. Significantly lower sugar prices in that country were the reason behind the move.[6][7] The company was headquartered in Port Chester, New York, where the distinctive former headquarters building (now apartments) still retains some Lifesavers signage. It was added to the National Register of Historic Places in 1985.[8]