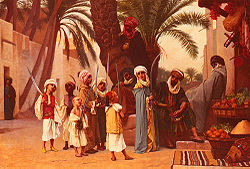 Arabs with scimitars from Boulanger's painting A Tale of 1001 Nights

A scimitar (pronounced /ˈsɪmɨtər/ or /ˈsɪmɨtɑr/)[1] is a backsword or sabre with a curved blade, originating in Southwest Asia (Middle East). The Arabic term saif (سيف) translates to "sword" in general, but is normally taken to refer to the scimitar type of curved backsword in particular.

The curved sword or "scimitar" was widespread throughout the Muslim world from at least the Ottoman period, with early examples dating to Abbasid era (9th century) Khurasan.[2] The type harks back to the makhaira type of antiquity, but the Arabic term saif is a loan from Greek xiphos (the straight, double-edged sword of Greek antiquity). The Persian sword now called "shamshir" appears by the 12th century and was popularized in Persia by the early 16th century, and had "relatives" in Turkey (the kilij), the Mughal Empire (the talwar).

The name is thought to be derived from the Persian word shafsher which means “lion’s claw,” due to its long, curved design. The word has been translated through many languages to end at scimitar. Varieties of Persian shamshir have been created like, Turkish kilij, Indian tulwar, Moroccan nimcha, Afghan pulwar. And Arabian saif.

The term saif in Arabic can refer to any Middle Eastern (or North African, South Asian) curved sword. The Arabic word is ultimately cognate with the ancient Greek xiphos, but it is not necessarily a direct loan from the Greek, it may have entered Arabic from another source, as both saif and xiphos go back to an old (Bronze Age) Wanderwort of the eastern Mediterranean, of unknown ultimate origin.

The curved sword, the sabre, is called muhaddab in Arabia and occurred after the Turkish Seljuk migration from Central Asia to Anatolia, popularizing the pre-existing Byzantine saber designs for cavalry use, which influenced the entire region. The word shamshir is Persian and refers to a straight-edged sword as well as to a curved-edged sword, depending on the era of usage.

The Indian tulwar is a sword similar to the shamshir, with the exception of a broader blade, mild curve and a disk shaped pommel which provides a very secure grip. The sword is made from very flexible wootz steel. The word “tulwar” literally means “sword” in Urdu/Hindi. The tulwar is unusual in that it can be used for thrusting as well as cutting.

The kilij is a scimitar used by the Turks in the Ottoman Empire; it appeared around the 15th century. The kilij is a unique kind of scimitar that has a slight taper down the straight of the blade until the last third of the sword, when it angles sharply and becomes deeper. After the First Barbary War, a bejeweled kilij was presented to the commanding Marine officer, thus beginning the tradition of granting, to all United States Marine Corps officers, the right to carry the ceremonial weapon as part of that tradition.

The Moroccan nimcha is a scimitar used in the late 18th century, and is usually forged using the blades of older swords, dating from as early as the 17th century, and with blades from countries as distant as Germany. This created a wide variety of nimcha, and almost no two are the same.

The Afghan pulwar is similar in blade design to the tulwar, but the cross guard on the pulwar angles in towards the blade to catch swords. Many pulwar hilts are engraved with ornamental inscriptions and designs.

Scimitars were used in cavalry warfare because of their relatively light weight when compared to larger swords and their curved design, good for slashing opponents while riding on a horse.[citation needed] Mongols, Rajputs and Sikhs used scimitars in warfare, among many other peoples.

Many Islamic traditions adopted scimitars, as attested by their symbolic occurrence, e.g. on the Coat of arms of Saudi Arabia.

The scimitar is also used in Saudi Arabia as an executioner's tool for beheading.

The flag of Saudi Arabia shows the shahada above a scimitar (design used during 1938–1973, the modern design shows the scimitar in a more stylized form)

The sword (or saif) is an important symbol in Arab cultures, and is used as a metaphor in many phrases in the Arabic language.

The word occurs also in various symbolic and status titles in Arabic (and adopted in other languages) used in Islamic states, notably: