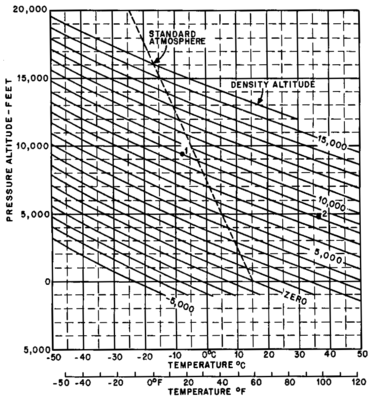 Density altitude is the altitude in the International Standard Atmosphere at which the air density would be equal to the actual air density at the place of observation, or, in other words, the height when measured in terms of the density of the air rather than the distance from the ground. "Density Altitude" is the pressure altitude adjusted for non-standard temperature.

Air density is perhaps the single most important factor affecting aircraft performance. It has a direct bearing on:[1]

Aircraft taking off from a "hot and high" airport such as the Quito Airport or Mexico City are at a significant aerodynamic disadvantage. The following effects result from a density altitude which is higher than the actual physical altitude:[1]

Density altitude can be calculated from atmospheric pressure and temperature (assuming dry air).

Note that the leading coefficient is derived from the ratio of the ISA sea level temperature (288.15 K) to ISA Temperature Lapse Rate (6.5 K/km), with the product converted into feet.

The National Weather Service uses the following dry-air approximation of the above equation in their standards.

Note that the NWS standard specifies that the density altitude should be rounded to the nearest 100 feet.

This is an easier formula to calculate (with great approximation) density altitude from pressure altitude ..and International Standard Atmosphere temperature deviation