Wilfred Arthur Charles Carter was born in Port Hilford, Nova Scotia, Canada. One of nine children, Carter began working odd jobs by the age of eight in Canning, Nova Scotia. He began singing after seeing a travelling Swiss performer named "The Yodelling Fool" in Canning. Carter left home at the age of 15 after a falling out with his father, who was a Baptist minister.

In 1923, after working as a lumberjack and singing with hobos in boxcars, Carter moved west to Calgary, Alberta, where he found work as a cowboy. He made extra money singing and playing his guitar at dances, performing for tourist parties, travelling in the Canadian Rockies. It was during this time that he developed his own yodelling style, sometimes called an "echo yodel" or a "three-in-one."

Carter performed his first radio broadcast on CFCN in 1930. Soon after, he was heard locally on CFAC and nationally on the CRBC. Two years later, he was entertaining tourists as a trail rider for the Canadian Pacific Railway, who promoted horseback excursions into the Canadian Rockies. Carter soon became very popular in the region. 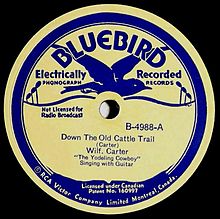 Down The Old Cattle Trail by Wilf Carter

In 1935, Carter moved to New York City, where he performed on WABC radio. He also hosted a CBS country music radio program until 1937. During this time, someone tagged him with the name "Montana Slim," and the name stuck.

In 1937, Carter returned to Alberta, where he purchased a ranch. He continued to appear on both American and Canadian radio shows, as well as perform live concerts.

In 1940, Carter seriously injured his back in a car accident in Montana. He was unable to perform for much of the decade, but his popularity was sustained by the periodic release of new recordings. He sold his ranch in 1949 and moved his family to a 180-acre (0.73 km2) farm in New Jersey. In 1952, he moved again, this time to Orlando, Florida, where he opened the Wilf Carter Motor Lodge, a venture that lasted only two years.

Return to the road

In 1949, Carter resumed live performances with tours in Canada and the United States. In 1950, he attracted over 50,000 people during a week at the Canadian National Exhibition bandstand in Toronto.

In 1953, Wilf Carter started touring with his own show called, The Family Show with the Folks You Know. His daughters, Carol and Sheila, worked with him as dancers and back-up singers.

In 1964, Carter performed for the first time at the Calgary Stampede. He also became one of the most requested guests on the TV show hosted by Canadian country singer Tommy Hunter.

Wilf Carter recorded over 40 original and compilation LP records for RCA and its affiliates, including Nuggets of the Golden West, Christmas in Canada, Songs of the Rail and Range, Songs of Australia, Wilf Carter Sings Jimmie Rogers, and Let's Go Back to the Bible. In 1983 he rerecorded many of his most popular songs for Fifty Golden Years.

In 1988, Carter recorded his last album, What Ever Happened to All Those Years. In 1991, at age 86, he made his last concert tour, appropriately called The Last Round-up Tour, with shows throughout Nova Scotia, New Brunswick, Ontario, and Manitoba. He retired the following year, due to his loss of hearing. Wilf Carter died in 1996 in Scottsdale, Arizona at the age of 91.[1]

Wilf Carter's simple, honest sound continues to attract listeners with each new generation. His straightforward singing and guitar playing have a universal appeal. He wrote hundreds of songs covering a wide range of themes, including traditional country western, cowboy, folk, and hobo songs. His recordings of "Blue Canadian Rockies" and "You Are My Sunshine" are among the most popular. Some believe that Carter wrote the popular American Christmas carol, "Jolly Old Saint Nicholas".[2]