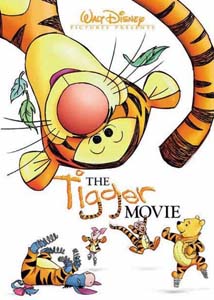 "The Tigger Movie" is a 2000 American animated , directed by . Part of the "" series, this film features Pooh's friend in his search for his family tree and other Tiggers like himself. As such, the story line may be viewed as an allegory about an adoptee's search to understand the meaning of family.

The film was the first feature-length theatrical Pooh film since 1977's "". Thanks to its success, two more feature-length Pooh movies were released to theaters: "" in 2003 and "" in 2005.

The film features original songs from the , the long-time Disney songwriting team who are well known for their contributions to other Disney films such as "Mary Poppins", "" and "The Jungle Book", as well as the original "" shorts.

The story begins with a live-action sequence, where the Narrator introduces the book as 'Winnie the Pooh'. However, Tigger leaps from the pages and changes the title to suit himself. The narrator allows the change to happen, and lets Tigger introduce his story.

While trying to find somebody to play with, Tigger accidentally destroys Eeyore's house with a large boulder by bouncing off it, subsequently pushing the boulder into the mud along with everyone else. In frustration with Tigger's relentless antics, Rabbit informs him that he is really 'the only one' and nobody in their right mind would play with him. By the time that Roo (being the one resident of the 100 Acre Wood who enjoys having Tigger for a playmate) catches up with him, he finds a very lonely Tigger leaning over the side of the bridge, watching all the other animals with their families.

Roo reminds him that he must have a family too, somewhere, finally convincing Tigger of the same. They go to Owl's, where they are told 'to find one's family, you must find one's family tree'. Taking the idea literally, they search for a tall, orange- and black-striped tree with Tiggers bouncing all over it. After giving up, they decide to search Tigger's cupboards and wardrobes, then finally send a letter.

That night, the first night of winter, everybody (excluding Tigger) gathers at Piglet's house. Feeling sorry for him, Roo announces that they should write a letter to him. Everyone adds a bit of friendly advice before signing 'your family' at the bottom of the page. Roo then slips the letter into Tigger's letter box.

The next day, everybody is woken by Tigger, who brandishes the letter. He shouts joyfully that his family has written to him and also that they are coming to visit the next evening. They are all shocked, as they had never written down anything that even resembles that; nevertheless, Tigger replies that he always reads . The others are flustered.

Later, Roo gathers Pooh, Piglet, Owl and Eeyore over to his home. He and his mother say they are going to charade as fellow Tiggers to attend the party and make Tigger feel loved. They are halfway through making the costumes when Rabbit bursts through the door, telling them that they should be gathering supplies (or should already have) for the impending snowstorm.

Meanwhile, Tigger is preparing for his party when somebody rings the doorbell. He opens the door to reveal a large number of Tiggers who claim to be his family. A party ensues with drinks, dance and games, and all the while Tigger believes they are his family. Yet when the smallest (Roo) attempts the Whoopty-Dooper Loopty-Looper Ally-Ooper Bounce and his mask falls off, the others reveal themselves as Tigger's friends. In despair, now sure that he must truly be the One and Only, he leaves the room, stating that he is leaving forever ("T-T-F-E, Ta-Ta, For-Ever!!").

He hikes through the snow until he finds a large tree on the cliffside which matches the description he gave of his family tree. He bounces across the branches, finding nothing, so he sits there, waiting for his family.

Rabbit protests against going to find Tigger, but the others are intent on it. Ignoring his continued protests, they drag poor Rabbit out into the blizzard to look for their friend. When they find him, they explain about the letter. Tigger does not believe their explanation and is greatly offended by it, but when a sudden avalanche caused by his irate shouting occurs, he pulls them all out of trouble.

Unfortunately, Tigger himself is still caught in the avalanche. Roo remembers the Whoopty-Dooper Loopty Looper Ally-Ooper bounce and travels down through the rock and snow to Tigger and wakes him from unconsciousness. To get out of the avalanche, they perform the signature bounce together. When everyone tells Christopher Robin why Tigger left, Christopher tells Tigger he didn't have to leave to find his family. Tigger objects and reaches for his letter that, until recently, he believed to be from his family, but finds it missing. It's not until Owl, Kanga, Roo, Eeyore, Pooh and Piglet recite the letter for him that he realizes that THEY sent the letter, not his family. Hearing this, Tigger finally comes to realize what was true all along, that his family is right here and always has been: his friends. Once they return home, Tigger gives everyone gifts: Eeyore gets a new house (the guest house meant for Tigger's "Family"), Pooh gets lots of Honey, Piglet gets a stack of firewood, and Rabbit is promised that he will watch where he's going. Lastly, he gives Roo his heart pendant, but it's still empty. As the story ends, Christopher Robin remedies this by taking a picture of Tigger's "family".

The animation work for the movie was simultaneously performed at the Walt Disney Studios and its ese chapter . The animation is traditional (2D), with characters moving across backgrounds painted in soft, warm hues in the style of book s in [ [http://movies2.nytimes.com/mem/movies/review.html?res=9F02EFDD103EF932A25751C0A9669C8B63 Review] , , , ] . Each chapter starts off as a static illustration on a printed page, where characters then start moving. The bold ink lines in the foreground, as well as the watercolor washes of the background are reminiscent of the original Pooh illustrator . [ [http://www.reel.com/movie.asp?MID=129484&buy=closed&Tab=reviews&CID=13#tabs review] , review] Graphics during end credits are pen and ink line drawings also reminiscent of Shepard.

The songs for "The Tigger Movie" were written by who had not written a feature for Disney in over 28 years. Their last fully original feature film score was for the Oscar nominated film, "" which was released in 1971. Originally slated for video or television release, the score was so well received (in demonstration form) by then Disney CEO, , that the project's priority level moved up to feature theatrical release. This was due in great part to the perceived caliber of the song score throughout the studio. All the songs were created new for the film except for "" which was originally written in 1968 for the landmark "" featurette, "" (released in 1968). That song was also by the Sherman Brothers. The "" of the song: "But the most wonderful Thing About Tiggers is I'm the only one..." provides the basis of "The Tigger Movie's" storyline. "" was the last song written for the film and is a collaborative effort between the and singer . It marks the only time the threesome worked together on a song. Song titles include:

*:: for "Outstanding Individual Achievement for Directing in an Animated Feature Production"::

*:: for "Outstanding Individual Achievement for Voice Acting by a Male Performer in an Animated Feature Production"::::As the voice of "Roo".