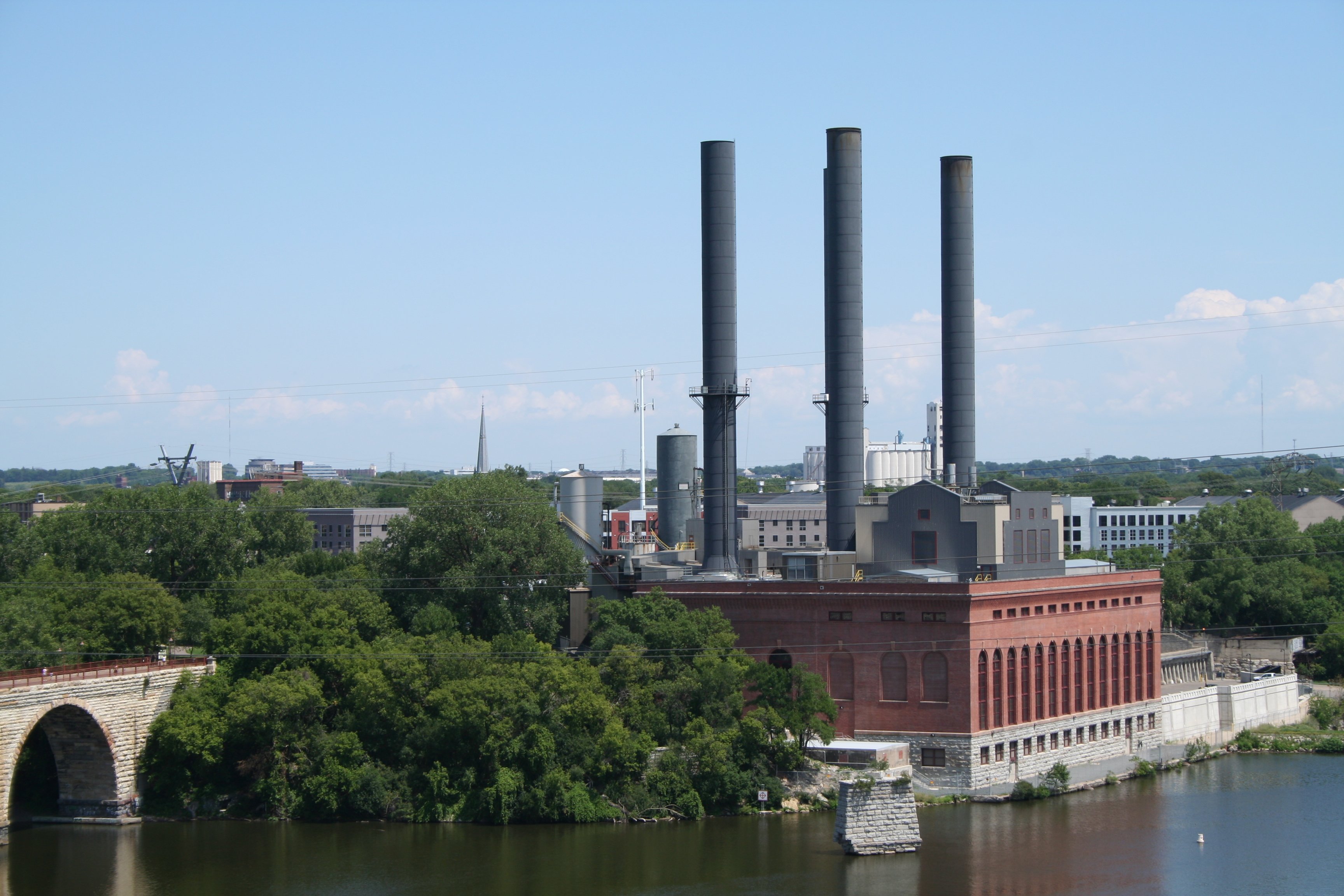 The Southeast Steam Plant also known as the Twin City Rapid Transit Company Steam Power Plant is a combined heat and power plant on the in the city of in the , and is owned by the .

. It supported the area's major form of public transportation for 50 years.

The facility heats 94 buildings—nearly all of the university's Minneapolis campus, cools 19 of those buildings, and provides to the , Minnesota State Board of Health and Cedar Riverside People's Center. Captured as the steam leaves the plant, pressure powers the plant and provides 20% of the university's electricity. The plant's steam is transported through an 18 mile (29 km) network of tunnels to the campus buildings and would be enough to heat 55,000 homes. Each student pays about $200 for energy and those in residence halls pay $375 a year for heat and air conditioning, water heating and dining services.

The plant is university building #059.

Just upstream is the operated by . The university's campus three miles (5 km) away has its own plant. In addition the university has s, and boilers powered by and natural gas, most used only in emergencies, with 11 used as peak shaving units.

Before pipes were reinsulated, employees needed breaks once an hour to work in the tunnels which reached 115° F (46° C). Insulation reduced the ambient temperature to 80° F (27° C), and the loss of energy from 10% to 4%, and over time resulted in a 25% campus-wide decrease in energy consumption.

The university closed the Southeast plant to gut and rebuild the interior, and in 2000, reopened it and closed down its old coal-burning power plant.

Among the "cleanest burning power plants in the country," the high temperature fires almost completely consume its fuels—, and waste. The plant has tested and been approved for hull , a that would reduce each student's fees by about $21.

Five s are operational. A new fluidized bed boiler (CFB) is six stories high and capable of burning coal, wood, oat hulls or natural gas. There are two natural gas boilers, one pulverized coal boiler that can also fire fuel oil, and a spreader stoker coal boiler, also capable of burning fuel oil and possibly oat hulls. During May and October, the periods of lowest demand, the CFB boiler is not in use.

The CFB controls s of the acid gases , and and particulate matter (PM) with limestone injection and a fabric filter. The pulverized coal and spreader stoker boilers are equipped with dry gas s (spray dryers). Two boilers have no control equipment but have gas recirculation to limit nitrogren oxide emission. The plant emits almost zero and mercury.

The unloading terminal for rail cars and its conveyors are enclosed and equipped with baghouse filters. The outdoor coal bunker is shielded from the wind by concrete retaining walls. s for ash have fabric filters.

Environmental groups including the Save Our Riverfront Coalition and Friends of the Mississippi Inc. attempted and failed to move the plant off the river in 1996. Elected officials and Larry Pogemiller, who was , and who was mayor of Minneapolis supported the move.

The Minnesota Pollution Control Agency approved use of fuels, specifically hulls in 2006