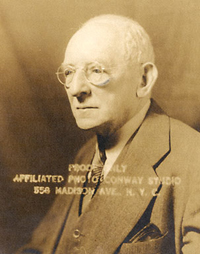 Carl Alexander Neuberg (1877-1956) was an early pioneer in , and often referred to as the "Father of Biochemistry".

Neuberg was head of the biochemistry section of one of the first s (that of ). In the 1910s, after announcing the discovery of an he called "carboxylase" (which catalyzed the decarboxylation of ), he developed a theory of the alcoholic fermentation of . Support for his theory was bolstered when he helped develop an industrial process that contributed materially to the German war effort in , manufacturing &mdash;for the production of s&mdash;by the fermentation of sugar. [Fruton, Joseph S. "Proteins, Enzymes, Genes: The Interplay of Chemistry and Biology". Yale University Press: New Haven, 1999. pp 44, 292-294]

Neuberg made a particularly important discovery in 1916: , a solubilization process where the addition of large amounts of a second solute causes an increase in the aqueous solubility of a different solute. [cite journal |author=Coffman R, Kildsig D |title=Effect of nicotinamide and urea on the solubility of riboflavin in various solvents |journal=J Pharm Sci |volume=85 |issue=9 |pages=951–4 |year=1996 |pmid=8877885 |doi=10.1021/js960012b] Due to his faith, Neuberg was forced to end his work at the in 1936 and leave Germany by the Nazis in 1937 and moved to the United States, where he continued to work on enzymes and cell transport processes. Succesor for the position at the became .