Consummation
This article is about the consummation of marriages. For other uses, see Consummation (disambiguation). 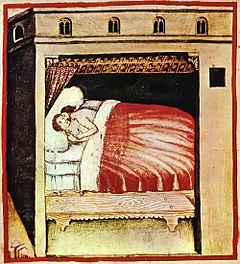 Illustration from Tacuinum Sanitatis, a medieval handbook on wellness.

Consummation or consummation of a marriage, in many traditions and statutes of civil or religious law, is the first (or first officially credited) act of sexual intercourse between two individuals, following their marriage to each other. Its legal significance arises from theories of marriage as having the purpose of producing legally recognized descendants of the partners, or of providing sanction to their sexual acts together, or both, and amounts to treating a marriage ceremony as falling short of completing the creation of the state of being married. Thus in some Western traditions, a marriage is not considered a binding contract until and unless it has been consummated.

(These formal and literal usages support informal and less precise usage of the word "consummation" to refer to a sexual landmark in relationship of varying intensity and duration.)

Within the Catholic Church, a marriage that has not yet been consummated, regardless of the reason for non-consummation, can be dissolved by the Pope.[1] Additionally, an inability or an intentional refusal to consummate the marriage is probable grounds for an annulment. Catholic canon law defines[2] a marriage as consummated when the

"spouses have performed between themselves in a human fashion a conjugal act which is suitable in itself for the procreation of offspring, to which marriage is ordered by its nature and by which the spouses become one flesh."

Thus some theologians, such as Fr. John A. Hardon, S.J., state that intercourse with contraception does not consummate a marriage.[3]

A rumour claims that several American colonies practiced hand-fast marriages, verbal commitments undertaken in a public place by a man and woman, sexually consummated, and automatically becoming fully recognized marriages if she became pregnant within one year, but otherwise terminable at that point by their own action.[4] These rumours are probably part of the popular myth saying that handfasting can lead to a "trial marriage." For more information see Handfasting: History.