An Iron Age settlement existed roughly in the period 30 BC to 40 AD in the vicinity of what is now St Paulinus Church.[1] Crayford is one of several places that have been suggested as the site of Roman Noviomagus (new market), a place mentioned on the Antonine Itinerary as being on the road from Canterbury to London. Crayford is also plausible as the site of a bloody battle in 457 AD at Crecganford (early English for "creeks-ford"). The Anglo-Saxon Chronicle (written over 400 years later) describes how Hengist and Aesc defeated the "Brettas", usually interpreted as Britons,[1] and often over-interpreted as "Celtic". See Timeline of Anglo-Saxon England#5th century.

Crayford is mentioned in the Domesday Book as having a church and three mills, and a population of 27 villagers and 2 smallholders.[1] As a parish (pre 1920) it included the hamlets of North End, Perry Street and Slade Green which lie to the north.[2] In 1831, the population of the parish was 2022 people.[3] For centuries it was strongly associated with brick-making, the printing of silk scarves, ties and calico cloths, and for a short period carpet-making.

There were two main Manor Houses in the area during the Middle Ages, Newbery Manor on the site of what is now Crayford Manor House, and Howbury Manor near Slade Green. Near to Newbery Manor was May Place, built for the Appleton (Apylton) family who served Kings Henry V and Henry VI.[4] Nearby Hall Place was built for Lord Mayor of the City of London Sir John Champneis in around 1537.[5] There was also an Iron Mill, which was later replaced by a saw mill (in 1765),[1] which produced the timber for the floor of Buckingham Palace.[3]

In 1819 the former saw mill site became a flour mill, and another major employer was the silk works set up by Augustus Applegath and later run by David Evans. The Maxim Nordenfeldt Gun and Ammunition Factory was also a major employer, until taken over by the Vickers Company in 1897. Vickers built military aeroplanes and armaments and became the dominant employer, building homes, a theatre and a canteen close to many workshops.[1] The canteen (built during World War I) became the town hall of the Crayford Urban District Council and remains a major landmark in municipal use.[5]

Another former major employer in Crayford was Dussek Brothers (part of Burmah-Castrol since the 1960s) who operated their oils and waxes blending business on Thames Road from around 1928 until the site was bought by BP and subsequently closed down in 2001. The entire site was demolished in early 2010, and is awaiting a buyer. The David Evans silk works is another recent closure, in 2002.

Famous people connected with the town include Admiral Sir Cloudesley Shovell, who lived at May Place between 1694 and 1707,[1] and Sir Frederick Currie who also lived at the Manor House, May Place.[6][7] Inventors Augustus Applegath,[1] Sir Hiram Maxim[8] and Jack Wall, inventor of the Crayford focuser, which is incorporated into many modern telescopes[9] were also residents. Sportsman Derek Ufton, who played both cricket and football professionally, was born in Crayford. 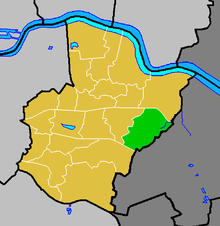 Crayford ward (green) within the London Borough of Bexley (yellow)

Crayford is now well known for a different theatre (home of the New Theatre Group),[5] a small astronomic observatory and a greyhound racing track. The theatre was named in honour of Geoffrey Whitworth who played a key part in developing a British tradition of amateur drama and in building political support for The Royal National Theatre erected at Waterloo, London after his death.

Nearby Hall Place is a scheduled ancient monument lying between Crayford and Bexley. It has gardens with the River Cray running through and a plant nursery, a cafe and restaurant plus the silkworks shop formerly located in the David Evans factory.[5]

Crayford Stadium is popular with a reasonable viewing area and races every Monday and Saturday nights. The stadium includes a bar, cafe and restaurant with ample parking. Crayford Stadium is one of the three remaining greyhound racing stadia in London, besides Romford Stadium and Wimbledon Stadium, from an original 33.

"The Bear and Ragged Staff" is the liveliest public house in the town centre and it was briefly renamed "The Orange Kipper" in the mid-1990s, before the owners were convinced to reinstate the traditional name.

There are five other pubs in the Town Centre - The Charlotte in Station Road, the Duke of Wellington on London Road and the Crayford Arms, Duke's Head and The One Bell (owned by Jimmy Bullard, a championship footballer), all on or adjoining Crayford High Street. There is also a pub on Thames Road called The Jolly Farmers.

The key shops are a large Sainsbury's supermarket situated next to stadium.

The high street is partly one-way for motor traffic and has a few shops and services including a Londis/Sub-Post Office, Barclays Bank, NHS surgery, nail bar, golf store, Peacocks and Iceland.

Crayford Motors are nearby and are a successful Citroen dealership.

On its way from Erith to Old Bexley, the "London LOOP" walk follows the River Cray across the Crayford Marshes and through the town centre. This section of the LOOP is based on an earlier signed walk, the Cray Riverway, and many of the signposts along it still carry the older route's name.

VCD Athletic Football Club compete in the Kent League and were runners-up for the league title in 2006/07. They play at Oakwood stadium, on Old Road, Crayford. ('VCD' stands for Vickers, Crayford and Dartford).

Speedway racing was staged at Crayford Greyhound Stadium. The team raced in the inaugural 1968 British League Division Two as the Highwaymen before closing down. In later years the sport was revived and the team were known as the Kestrels. The track subsequently closed and the team moved to Hackney Stadium in London.

Crayford railway station is just a short walk from the high street.

Access to the station is available from Lower Station Road, although Bexley Council has promoted a bridge linking Sainsbury's, Crayford Stadium and the West of the town with the station.

Trains go west to Central London and east towards Slade Green or Dartford and Gravesend.

The station is in Travelcard Zone 6 and is covered by the Transport for London Overground Network(ON) and Metro schemes with westbound trains to Central London at least four times an hour from 6.00am to 8pm.

It is operated by Southeastern (train operating company).

Trains are operated by Southeastern, part of the Govia group. Trains are a mix of the older refurbished Networker Trains introduced in the nineties and more modern class 376 trains with more capacity, no toilets, and automated train announcements.

Peak services between 8.30 and 9.00am and 5.30 and 6.30pm, are generally 5 to 10 minutes late due to congestion in the Lewisham and London Bridge areas. This is caused by the complex points joining different branch lines. The rebuilding of London Bridge to achieve Thameslink objectives will threaten the standard of timekeeping recently achieved.

Other nearby railway stations

The 96 contracted by Transport for London runs between Woolwich and Bluewater Shopping Centre. This bus has a frequency of 8 minutes during Monday to Saturday daytimes and 15–20 minutes at other times.

The 428 contracted by Transport for London runs between Erith and Bluewater Shopping Centre. This bus has a frequency of 15 minutes during Monday to Saturday daytimes and 30 minutes at other times.

The 492 contracted by Transport for London runs between Sidcup and Bluewater Shopping Centre. This bus has a frequency of 30 minutes during Monday to Saturday daytimes and 60 minutes at other times.