Popper's experiment is an experiment proposed by the 20th century philosopher of science , to test the standard interpretation (the ) of Quantum mechanics.

Quantum theory is an astoundingly successful theory when it comes to explainingor predicting physical phenomena. There are various interpretations of quantum mechanics that do not agree with each other. Despite their differences, they are nearly experimentally indistinguishable from each other. The most widely accepted interpretation of quantum mechanics is the put forward by . The spirit of the Copenhagen interpretation is that the of a system is treated as a composite whole, so disturbing any part of it disturbs the whole wavefunction. This leads to the counter-intuitive result that two well separated, non-interacting systems show a mysterious dependence on each other. Einstein called this . Einstein's discomfort with this kind of spooky action is summarized in the famous EPR argument.

Popper's proposed experiment consists of a source of particles that can generate pairsof particles traveling to the left and to the right along the x-axis. Themomentum along the y-direction of the two particles is entangled in such away so as to conserve the initial momentum at the source,which is zero. Quantum mechanics allows this kind of entanglement. There are two slits, one each in the paths of the two particles.Behind the slits are semicircular arrays of detectors which can detect theparticles after they pass through the slits (see Fig. 1).Popper argued that because the slits localize the particles to a narrowregion along the y-axis, from the they experience large uncertainties in the y-components of their momenta.This larger spread in the momentum will show up as particles beingdetected even at positions that lie outside the regions where particleswould normally reach based on their initial momentum spread.

We first test the Heisenberg scatter for both the beams of particles going to the right and to the left, by making the two slits A and B wider or narrower. If the slits are narrower, then counters should come into play which are higher up and lower down, seen from the slits. The coming into play of these counters is indicative of the wider scattering angles which go with narrower slit, according to the Heisenberg relations.

We thus obtain fairly precise "knowledge" about the y position of particle 2 - we have "measured" its y position indirectly. And since it is, according to the , our "knowledge" which is described by the theory - and especially by the Heisenberg relations - we should expect that the momentum of particle 2 scatters as much as that of particle 1, even though the slit A is much narrower than the widely opened slit at B.

Now the scatter can, in principle, be tested with the help of the counters. If the is correct, then such counters on the far side of slit B that are indicative of a wide scatter (and of a narrow slit) should now count coincidences: counters that did not count any particles before the slit A was narrowed.

To sum up: if the Copenhagen interpretation iscorrect, then any increase in the precision in the measurement of our "mere knowledge" of the particles going through slit B should increase theirscatter.

Many viewed Popper's experiment as a crucial test of quantum mechanics, and there was a debate on what result an actual realization of the experiment would yield.

* In 1985, Sudbery pointed out that the EPR state, which could be written as , already contained an infinite spread in momenta (tacit in the integral over k), so no further spread could be seen by localizing one particle.

* Kripps theoretically analyzed Popper's experiment and predicted that narrowing slit A would lead to momentum spread increasing at slit B. Kripps also argued that his result was based just on the formalism of quantum mechanics, without any interpretational problem. Thus, if Popper was challenging anything, he was challenging the central formalism of quantum mechanics.

* In 1987 there came a major objection to Popper's proposal from Collet and Loudon.

* Redhead analyzed Popper's experiment with a broad source and concluded that it could not yield the effect that Popper was seeking. 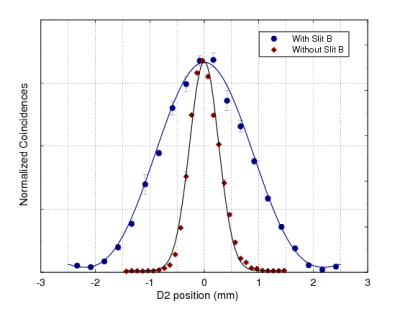 thumb|200px|left|Fig.4 Results of the photon experiment by Kim and Shih, aimed at realizing Popper's proposal. The diffraction pattern in the absence of slit B (red symbols) is much narrower than that in the presence of areal slit (blue symbols).

Popper's experiment was realized in 1999 by Kim and Shih using a SPDC photon source.

* Short criticized Kim and Shih's experiment, arguing that because of the finite size of the source, the localization of particle 2 is imperfect, which leads to a smaller momentum spread than expected.

* Sancho carried out a theoretical analysis of Popper's experiment, using the path-integral approach, and found a smililar kind of narrowing in the momentum spread of particle 2, as was observed by Kim and Shih.

What is wrong with Popper's proposal?

The fundamental flaw in Popper's argument can be seen from the following simple analysis.

The ideal state is written as , where the two labels in the "ket" state represent the positions or momenta of the two particle. This implies perfect correlation, meaning, detecting particle 1 at position will also lead to particle 2 being detected at . If particle 1 is measured to have a momentum , particle 2 will be detected to have a momentum . The particles in this state have infinte momentum spread, and are infinitely delocalized. However, in real world, correlations are always imperfect. Consider the following entangled state

where represents a finite momentum spread, and is a measure of the position spread of the particles. The uncertainties in position and momentum, for the two particles can be written as

The action of a narrow slit on particle 1 can be thought of as reducing it to a narrow Gaussian state: . This will reduce the state of particle 2 to .The momentum uncertainty of particle 2 can now be calculated, and is given by

Thus, the basic premise of Popper's experiment, that the implies that particle 2 will show an additional momentum spread, is incorrect.

On the other hand, if slit A is gradually narrowed, the momentum spread of particle 2 (conditioned on the detection of particle 1 behind slit A) will show a gradual increase (never beyond the initial spread, of course). This is what quantum mechanics predicts. Popper had said

...if the Copenhagen interpretation is correct, then any increase in the precision in the measurement of our mere knowledge of the particles going through slit B should increase their scatter.

This clearly follows from quantum mechanics, without invoking the .

The expected additional momentum scatter which Popper wrongly attributed to the can be interpreted as allowing faster-than-light communication, which is known to be impossible, even in . Indeed some authors have criticized Popper's experiment based on this impossibility of superluminal communication in quantum mechanics