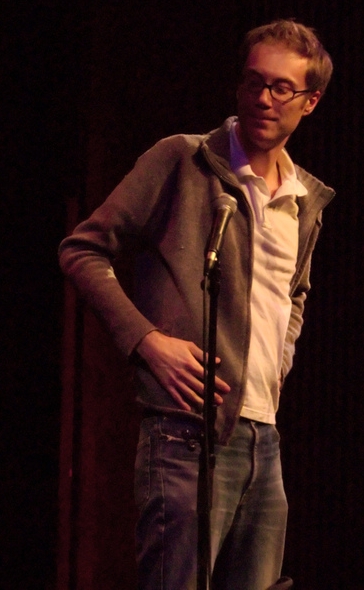 Stephen James Merchant (born 24 November 1974) is a -, -, - and -award winning British writer, director, and comic actor. He is best known for his work with his friend in the popular British sitcoms "The Office" and "Extras", as well as "" in its radio and podcast forms.

Merchant was born in , , the son of Jane Elaine (Hibbs), a nursery nurse, and Ronald John Merchant, an insurance representative and attended Hanham High School [ [http://www.telegraph.co.uk/education/main.jhtml?view=DETAILS&grid=&xml=/education/2007/08/18/fafamdet118.xml Family detective: Stephen Merchant - Telegraph] ] . As he has described in shows and podcasts, Merchant was a very shy child, tending to focus more on school work as opposed to sport. His school yearbook predicted that he would enjoy success. Merchant has also described his relatively normal childhood, which is often contrasted with that of his associate .

Merchant is a graduate of the and a former film reviewer on the student radio station, where he began his broadcasting career. The station's 1995/96 yearbook tipped him for great things:Cquote|Merchant, Steve: The man behind the funniest show on W963, the "Steve Show", highlights of which included an inspired take-off of the IRN news ('we spoke to ...'), an advert for Coventry Library ('Coventry Library makes no claims to be infinite'), attempting to give away an video to people on the toilet in Rootes [hall of residence] , telephoning the library bridge security post to ask if they had seen a lost ball, as well as a series of snippets entitled 'At home with Rose and '. This show stood out from the crowd, as it was actually genuinely good. It's only a matter of time before Steve and his posse follow in the footsteps of .Members of Steve's posse included film critic James King, Dan Warren, and Geraint the Welshman. He graduated with a 1st class degree in Film and Literature in 1996.

Stephen once appeared on "Blockbusters". He began his career as a stand up comedian at Bristol's Comedy Box; "The first week I did really well,’ he remembers. ‘The second week I died on my arse. I realised that stand-up was not that easy after all’". He got to be a finalist at the 1998 Daily Telegraph Open Mic awards before joining Radio Caroline as a breakfast DJ.

Merchant and long-time collaborator-friend , made "Golden Years", a Comedy Lab pilot for about a manager with a mid-life crisis who decides to go on "Stars In Your Eyes" as , a hero of Gervais’s. The show wasn't a hit, but with the benefit of hindsight the seeds for "The Office" were apparently sown here. Nonetheless, it was enough to bring Gervais a slot on the "Eleven O’Clock Show". In 1997, Merchant was hired by London radio station Xfm to work with the "Head of Speech", Gervais. In 1998, Merchant left Xfm to start a production course at the before Xfm was bought out by the .

"The Office" and "Extras"

In mid-2001, the first series of "The Office" was broadcast on . Also in 2001, Merchant and Gervais were rehired by Xfm and discovered .

Merchant made a cameo appearance as Oggy (also known as "The Oggmonster", although his real name is Nathan), a friend of , in the second series of "The Office" in 2002. His father, Ron Merchant, also appears as a character named "Gordon", an office handyman who becomes transfixed by the pseudo-documentary cameras whenever he walks into shot.

Merchant is also an executive producer for the American version of "The Office". On 6 February 2006 it was announced that Merchant and Gervais were returning to "The Office" to write an episode for the third season of the American version of the programme. [ [http://news.scotsman.com/latest.cfm?id=190702006 Gervais to write US office episode] ] Entitled "The Convict", it premiered on 30 November 2006.

In 2002 Merchant directed a one-off comedy called "The Last Chancers" for 's "Comedy Lab" strand. In 2003, he had a recurring role in "" as a chef. In 2004, he worked as a Script Associate on the Chris Morris and sitcom "", and had a cameo in "". In 2005 Merchant starred as a radio football sports commentator in the sitcom "". In winter 2006, Merchant had a cameo role in the Fox series "24". He had a non-speaking 4-second role as an analyst sitting at a computer in the sixth season opener.

In 2006, Merchant and long-time comedy partner Ricky Gervais recorded a series of episodes of their [http://www.rickygervais.com/podcasts2.php podcasts] , assisted by . The podcasts were a follow-up to their award-winning radio shows on Xfm, and were rated the #1 most downloaded podcast of all time. Following the success of the first 12 shows, offered for free, the trio went on to produce two more series. At the end of the third series, Gervais announced that they would be taking a break from podcasts, only to return weeks later, announcing three more free podcasts. Those aired at Halloween, Thanksgiving, and Christmas 2006.

In August 2008, Ricky Gervais, Merchant and Karl Pilkington recorded a final set of audiobooks running over 2 hours, which were released on the 16th of September.

Starting 14 January 2007, Merchant began a radio show on BBC 6 music, running Sundays from 3-5pm. [ [http://www.bbc.co.uk/pressoffice/pressreleases/stories/2006/11_november/30/merchant.shtml Stephen Merchant presents new show for BBC 6 Music] ] The show focuses not on comedy but on music and particularly on "new music," which Steve defines as "Music you've not heard before." Steve also regularly plays classic , which he refers to as "hippity hop". Presenters and listeners suggest songs to play which Merchant then may add to his playlist for future shows. Currently featured on the show are long-time friends of Steve's, including his former housemate Dan Warren (a friend since university), Harry (a friend from youth in Bristol), and posh actor Rufus Gerrard-Wright (who appeared in an episode of "Extras"). After a spring search process, Merchant and his mates selected former "" actor [ [http://www.tv.com/sammy-dobson/person/95277/appearances.html http://www.tv.com/sammy-dobson/person/95277/appearances.html] ] to join them on air as their "She-J".