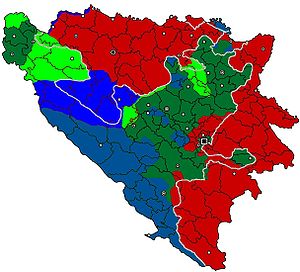 At the same time, NATO began its bombings (Operation Deliberate Force) against Bosnian Serbs as punishment for the second of the two Markale Massacres, which further demoralized and weakened the Bosnian Serb position.

Following successful operations during the Summer of 1995 and the August overtaking of Krajina during Operation Storm, Croatian forces switched to Bosnian territory to continue the pursuit of Serb forces which were routed after Storm.

Two elite Croatian brigades, which captured Knin during Storm, the 4th Guards Brigade and the 7th Guards Brigade, returned to Bosnian territory and attacked north from the area around Bosansko Grahovo, captured during the summer.

The first phase of the Operation (Mistral 1) began on September 8 and the first Serb lines were broken quickly. Opposing the Croatians were 7 light infantry brigades, one motorized brigade and two armored battalions of the Serb forces. The city of Šipovo fell quickly and the 7th Guards Brigade captured the strategically important mountain pass of Mliništa. Jajce was captured on September 13 and the first phase ended on that day at 1800 hours at which time about 2000 square kilometers had changed hands.

Following this, the second phase of the operation (Mistral 2) began, during which Drvar was captured on September 14, and the operation ended on September 30. When it ended, only the city of Mrkonjić Grad remained between Croat forces and the Serb capital of Banja Luka. Mrkonjić Grad was captured soon after, during Operation Južni potez (Oct 8-12 1995.).

At the same time, the Bosnian Fifth Corps from Bihać, on the left wing of the Croatian advance, launched its own simultaneous offensive and captured Krupa, Bosanski Petrovac and Ključ; advancing on Prijedor, west of Banja Luka. Although Bosnian actions were not part of Operation Mistral, the advancement of the two armies were coordinated as part of a general fall offensive in western Bosnia.

The success of the Croat and Bosniak post-Storm offensives meant that the entire western Bosnia was now in their hands. The vital Serb center of Banja Luka was now a realistic next objective, whose capture would mean total defeat for Serb forces in Bosnia. Their new position finally convinced the Bosnian Serb leaders to agree to negotiate and the Dayton Agreement was reached only one month after Mistral, ending the Bosnian War.