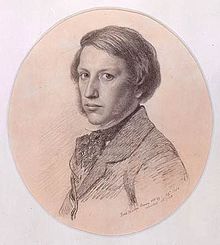 The Manchester Murals are a series of twelve paintings by Ford Madox Brown on the history of Manchester, England in Manchester Town Hall. Following the success of Brown's painting Work he was commissioned to paint six murals for the Great Hall of the new building. Another six murals were to be completed by a local artist, Frederic Shields. Shields eventually withdrew, leaving Brown to complete all twelve works. The murals were begun in 1879, towards the end of Brown's career, but were not completed until 1893, the year he died. During this period he moved from London to Manchester with his family, first living at Crumpsall and then at Victoria Park.

The murals were intended to form part of the decoration of the Great Hall, the central room in the new town hall designed by Alfred Waterhouse.[1] Entering the room, the first six murals are on the left hand wall; the second six are on the right hand wall. They progress chronologically from the left wall nearest the entrance to the right wall opposite. This basic scheme repeats that of William Bell Scott's murals on the history of Northumbria in Wallington Hall.

The subjects chosen reflect the Victorian ideals through which the history of Manchester was seen, focusing on Christianity, commerce and the textile industry. Brown did a great deal of research to check the details for accuracy and he wrote the descriptions himself.

Recent commentators on the murals have identified satirical and critical features in the compositions which complicate any simple explanation of the paintings as expressions of the "Victorian ideals" that the chosen subjects imply. The art historian Julie F. Codell refers to these as the "pratfalls and penultimates" of history, as opposed to its stately progress.[2]

Most of the paintings contain Hogarthian satire (in contrast to Bell Scott's works). In the first picture the wife of the Roman general wearing a blond wig distracts him from his work; their son — a Caligula in the making — kicks an African servant. The painting that seems to celebrate industrial technology, John Kay: Inventor of the Fly Shuttle, depicts the hysterical inventor fleeing from an unruly mob which is bent on destroying the machine. Instead of culminating in the achievement of modern Manchester, the sequence concludes with a rustic scene in a small village. According to Codell, history is portrayed as fragmented, contested, and as ending in a "penultimate" moment.

This may be related to Brown's interest in anarchism and William Morris's utopian socialism at the time. However, it also arises from disputes about the more modern subjects. Paintings depicting the Peterloo Massacre in 1819 and the end of the Lancashire Cotton Famine in 1865 had been proposed, but both were rejected by the council's committee as too controversial.

All but the last four murals were painted directly on to the wall. They were not created using the true fresco process but taking advantage of a Victorian technique, the Gambier Parry process, which being "spirit" based produced a more hard wearing image. Brown completed the last four murals on canvas, after he had returned to London.