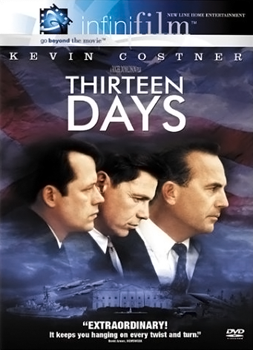 "Thirteen Days" is a 2000 historical film directed by about the of , seen from the perspective of the US political leadership.

Most of the scenes take place in the , focusing on the decision-making process as President and his brother Robert confront the military, who are pushing for an invasion of as a reaction to the installation of missiles there by the . Most of the film deals not so much with the between the s so much as the conflict between the civilian and military authorities over the correct strategy to pursue. The film is structured so that much of it is seen through the eyes of special White House counsel , played by .

While the movie carries the same name as the book "Thirteen Days" by Robert F. Kennedy, it is actually based on "The Kennedy Tapes - Inside the White House During the Cuban Missile Crisis" by Ernest May and .

was one of the production companies, alongside Kevin Costner's company Tig Productions and Armyan Bernstein's Beacon Communications. The film was given a limited release in late , but wide release did not occur until , with a staggered release to various countries throughout most of the year.

* as Kenneth "Kenny" O'Donnell
* as President
* as First Lady
* as Attorney General
* as Secretary of Defense
* as Gen.
*Frank Wood as National Security Advisor
* as Deputy Director of the CIA Lt. Gen.
*Kevin Conway as Chief of Staff of the USAF Gen.
* as
* as
* as

*"", another film regarding the crisis
*"Thirteen Days", memoirs of the crisis by Robert Kennedy