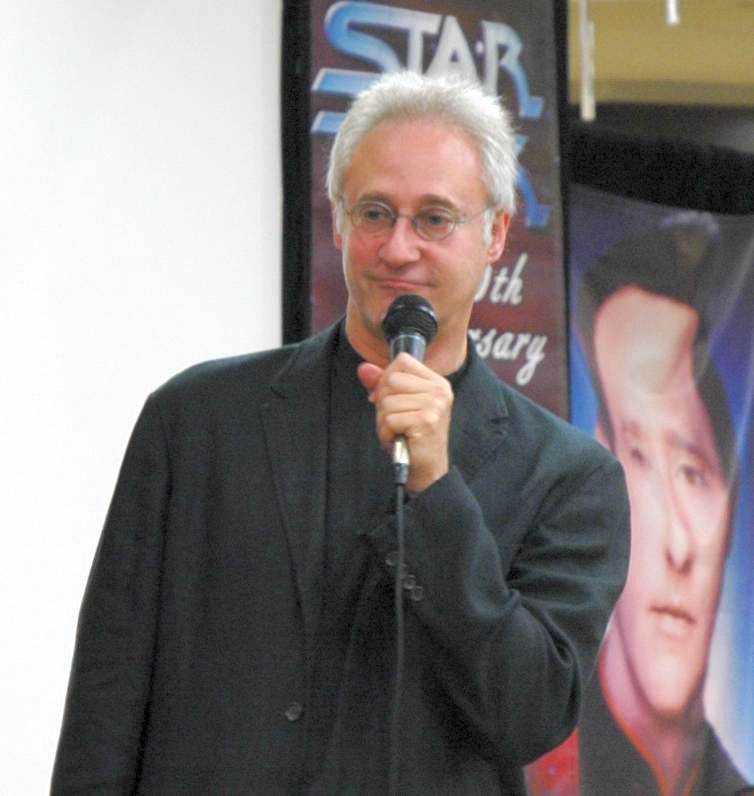 Brent Jay Spiner (born , ) is an American actor, best known for his portrayal of the Lieutenant Commander Data in the television and film series "".

Spiner was born in , the son of Sylvia, a corporate , and Jack Spiner, who owned a furniture store. [ [http://www.filmreference.com/film/86/Brent-Spiner.html Brent Spiner Biography (1949-) ] ] After Jack's death, he was adopted by Sylvia's second husband, Sol Mintz, whose surname he used between 1955 and 1975. Spiner attended Bellaire High School in , where he was influenced by drama teacher ndash the same drama teacher who coached such people as , , , , , and . Spiner would become active on the Bellaire , eventually winning the national championship in dramatic interpretation. After attending the and performing in local theatre there, Spiner moved to , where he became a stage actor, performing in several Broadway and plays, including "The Three Musketeers" and 's "". At the same time, he also had a nonspeaking background role in the film "" as one of the silent "grotesques" on Sandy Bates's train car.

In 1984, Spiner moved to , appearing in several pilots and s. He played a recurring character on "" named Bob Wheeler, patriarch of a family of hicks. In 1986, Spiner also made two appearances as characters in season 3 of the television show "": Mr. Conroy and Billy Bob. Spiner's first and only starring film role was in "Rent Control" in 1984. In the "" episode "Never Love a Goalie, Part II", he memorably played the acquitted murder suspect Bill Grand.

In 1987, Spiner started his 15 year run (on television for 7 seasons and in 4 feature films) portraying Lieutenant Commander Data on '. As one of the main characters, he appeared in all but one episode of the series' 178 episode run. He reprised his role in the spin-off films, "" (1994), ' (1996), ' (1998), and "" (2002). Although billed as the final "Trek" movie for the "TNG" cast, the ambiguous ending of "" suggested that there was a possible avenue for the return of Data. However, Spiner has insisted that he is now too old to play with conviction a character who is not supposed to age. Additionally, he voiced his character in several "" video games, such as "Star Trek Generations", ', ', and '.

In 1997, Spiner returned to the Broadway stage, playing the leading role of in the revival of the musical "1776". His performance met with generally positive reviews, and the production was nominated for a . A cast recording was released of the revival production. Spiner played the voice of in the 1999 .

In 2004, Spiner returned to the world of "Star Trek" when he appeared as Dr. Arik Soong, a perhaps equally brilliant but much sleazier ancestor of Data's creator Dr. Noonien Soong, whom he also played, in a three-episode of "" in "", "", and "". He also briefly reprised the role of Data for the series, providing a voice-only cameo in the "Enterprise" finale, "". Spiner also cameoed in "Joey", playing himself. He had also guest-starred in "" as a man who interviews Rachel for .

In 2005, Spiner began a role in a short-lived science-fiction television series, "Threshold", which was cancelled in November of that year after 13 episodes were produced. In 2006, Spiner appeared in a comedy, "", with Hilary and Haylie Duff.

During the tenth season of the sitcom "", in the episode "", Spiner makes two brief cameos as a fellow airline passenger of Frasier's ex, Lilith. When she comments that he must not like flying (in reference to his abnormally pale skin tone) he replies that he is "always this pale", a reference to the pasty complexion of his "Star Trek" character Data.

In March 2008, Spiner performed alongside in a new radio show/musical called "Dreamland".

Spiner is not as active in the "Star Trek" convention scene as many of his co-stars are, although he has participated in the last few years in several conventions around the world, such as in Las Vegas, Milton Keynes and Hobby Star's Fan Expo in Toronto Canada. He is close to his "Next Generation" colleagues and counts , , and amongst his best friends. He was seen at the 2007 , held in Atlanta, Georgia and more recently at the first ever Collectormania Midlands in Coventry, UK on 1st/2nd March 2008, along with Star Trek co-star . [ [http://www.collectormaniamidlands.com Collectormania Midlands ] ] Most recently he made an appearance at the FedCon XVII at Bonn, Germany on 18th-20th April 2008, accompanying his fellow Star Trek stars , , , as well as and .

Spiner recently attended the in Secaucus, New Jersey from 7-9 March 2008. He was promoting his recent CD, "Dreamland," an audio experience reminiscent of radio plays from the 1940s. , sister of singer/songwriter , is featured on the CD as the female lead.

Spiner currently lives in Los Angeles and guards the privacy of his personal life. He was linked to actress for many years in the late 1970s and early 1980s. His marital status is uncertain; some sources have cited Loree McBride as his wife, [imdb name|id=0564344|name=Loree McBride] while others maintain that the two are not married. The couple have a son named Jackson, who was born in 2002.

In response to a fan's question at the 2008 Fan Expo in Toronto, Brent said when he was first auditioning for the role of Data on Star Trek The Next Generation, he was told he might have to read for the role of Cmdr. William T. Riker. Brent's response was he only wanted to read for the character of Lt. Cmdr. Data, he said he was not interested in doing the show in the event he would be cast as Riker.Fact|date=August 2008