The station is the closest station to the South Luzon Expressway, as well as to Chino Roces Avenue and Chino Roces Extension. It is also located near Dasmariñas Village and Ecology Village, two major residential areas in the Makati area. It is also close to some prominent business headquarters and institutions, such as those of the Philippine operations of Levi's and GlaxoSmithKline, schools such as Asia Pacific College, Assumption College, Don Bosco Technical Institute and Colegio San Agustin-Makati and shopping centers such as Makati Cinema Square (near Don Bosco) and the upscale Magallanes Center. 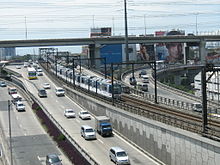 Magallanes Station's transport terminal outside the MRT station serves cycle rickshaws, taxis, jeepneys, and buses. Buses that ply the EDSA and South Luzon Expressway routes (both city and provincial) stop near the station. Passengers may board jeepneys under the Magallanes interchange, wherein these go to various locations in Metro Manila (northern and western Makati City, Makati Central Business District, Taguig City, Pasay City, and the City of Manila). Taxis are also available near the station, and the taxi stands are located along with the bus stops near the MRT station (both northbound and southbound EDSA).

Passengers wishing to take the PNR may also take a short walk to EDSA railway station located near the Magallanes interchange, south of Chino Roces Avenue.