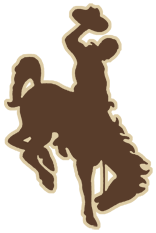 Wyoming Cowboys is the name given to the sports teams of the . The women's teams use the name Cowgirls. The University is a member of the and competes in NCAA , fielding 15 s. Wrestling is the only varsity sport that is not a member of the . It competes in the . The logo that adorns uniforms of the athletes is one of the most distinctive in the nation. The football helmets were chosen as the third best logo helmet (no letters) by 's 10 Spot.

The nickname Cowboys was used as early as 1891 when a true assisted the Wyoming football team against a team from . One of the Cheyenne players allegedly yelled "Hey, look at that cowboy," and the name stuck.

Wyoming is unusual in having two school mascots; "Cowboy Joe" (a pony present primarily at football games) and "Pistol Pete" (a cowboy). The athletic teams are cheered on by the school song "Ragtime Cowboy Joe" and the fight song "Fight, Wyoming, Fight". Men's athletic teams are known as "Cowboys" and women's teams are called "Cowgirls". Teams of either gender are also referred to as "Pokes", short for Cowpokes.

Football began in 1893 at UW, and games were played against local high schools and colleges. War Memorial Stadium was built in 1950 with an original capacity of 20,000 fans.

Wyoming's Men's Basketball team has also had its share of success. In 1943 it defeated 46-34 to win the . Fennis Dembo was a popular player in the mid 80's.

The Women's Basketball team hosted and won the 2006-2007 WNIT (Women's National Invitation Tournament) after not receiving a bid in the 2006-2007 NCAA Tournament. The Cowgirls finished with a 27-9 overall record and 11-5 in the Mountain West Conference. They also finished second among Division I institutions with one of the largest increases from the previous season. They averaged 1,699 during the 2005-06 season compared to 4,638 during the 2006-07 Season. They also finished 22nd among NCAA Attendance leaders, averaging 8,757 fans a game.

In 2008, the Cowgirls finished the season with a 24-7 record overall, 12-4 in conference play. This earned them an at large bid for the NCAA tournament for the first time in history. They lost in the first round to Pittsburgh.

The Cowboy Men's and Women's Cross Country teams have had notable success over the years.

In 2001 the team lost 8 runners in an accident involving another Wyoming student, . Haskins was drunk at the time and is currently serving 14-20 years for his crime.

University of Wyoming athletics has also been represented on the Olympic stage by swim sensation . Usher was a member of the University of Wyoming Men's Swimming and Diving team from 2000 to 2004 where he was a 5-time NCAA All-American and six time individual champion and record holder.

Although technically UW is a club sport, founded in 1972, it has consistently been one of the more successful programs at Wyoming. The team competes in Division I and are a member of the (ERRFU) along with Colorado State, Colorado, and Air Force. While UW rugby is a club sport, it competes against scholarship teams such as New Mexico. The team regularly makes it the national tournament. In 2000, they were runner-ups to the . In and , they placed fourth in the nation.

There is also a team at the known as Wyoming Women's Rugby Football Union (WWRFU) which started in 1985. They are a club sport but like the men, compete at a Division 1 level. As a member of the (ERRFU) they play teams like , , and the University of Colorado. Another recently added team to ERRFU is the . Though the women's team has far less numbers than the men's team, they continue to grow making it to their first regional tournament in 2007 where they finished in third place in the union and fourth place in the conference. [ [http://uwadmnweb.uwyo.edu/Clubsports/main/women_rugby.asp University of Wyoming Web Templates ] ]

Wyoming's fight song is . [http://wmedia.uwyo.edu/marchingband/cowboyjoe.mp3 Ragtime Cowboy Joe MP3] . In football, the fight song is sung throughout the game including when the team runs on the field, at kickoff, and after a touchdown. A cannon in the north end zone fires every time a point is scored. When the football teams runs from the RAC locker room to Jonah Field, they touch the Steamboat bronze statue for good luck. The beer song is a long-standing tradition with the students. The students will occasionally chant "Beer Song, Beer Song" until the band plays it. [http://www.youtube.com/watch?v=HmR7Ts8Q7NE UW Beer Song at the 2007 WNIT Championship Game]

"He always sings
Raggy music to the cattle
as he swings
back and forward in the saddle,
on a horse - a pretty good horse!
He's got a syncopated gaiter,
and you ought to hear the meter
to the roar of his repeater;
how they run - yes run! -
when they hear him 'a-comin',
cause the western folks all know,
he's a high-falootin', rootin, tootin',
son of a gun from ol' Wyoming,
Ragtime Cowboy
Talk about your Cowboy,
Ragtime Cowboy Joe.
C!
O!
W!
B!
O!
Y!
S!
Cowboys! Cowboys! Cowboys!

In Heaven there is no beer, NO BEER!
That's why we drink it here, RIGHT HERE!
And when we're gone from here,
All our friends will be drinkin' all the Be-e-eer

Jonah Field at War Memorial Stadium, capacity 32,580, was built in . The playing field is at an elevation of 7,220 feet (2200m), the highest in Division I football. The natural grass field was replaced by artificial turf in 2005. The new surface, known as Desso Challenge Pro 60 Monofilament Synthetic Turf, is the first of its kind in Division I.

Near the north end zone is a statue depicting the Steamboat and rider logo. At the beginning of the game and at halftime, the team runs from the locker room in the RAC to the field and the statue is touched as a token of good luck.

The Wyoming basketball teams have always enjoyed playing on the "Highest Courts" in the nation. Built in 1982 at a cost of $15 million, the commonly called the A-A (or "Dome of Doom") seats over 15,000. It has been home to the Cowboys since its opening, and to the Cowgirls since 2003. In the yard outside the A-A, is a beautiful statue named "Fanning a Twister." This statue is a cowboy on top of bucking bronco, similar to the sports logo.

The UniWyo Sports Complex serves as the facility for Cowboys wrestling and Cowgirls volleyball, and was also home to the Cowgirls basketball team before it moved into the Arena-Auditorium in 2003. The seating capacity is approximately 1,200 people. It is situated north of the Field House, south of the Arena-Auditorium, and northwest of War Memorial Stadium. Formerly the Multi-purpose Gymnasium, it was renamed in 2005 to the UniWyo Sports Complex thanks in part to a $1 million gift.

Commonly called the RAC (pronounced "Rack"), it opened its doors on , . It serves as the training facility for all varsity sports. It also contains the football locker room, an academic and counseling center, and a sports medicine facility. It began construction May of 2000, and was competed at a cost of $9.4 million.

Construction on the new Indoor Practice Facility (also called the IPF) began in Fall of 2006. It is located on the north portion of the War Memorial Stadium parking lot, north east of the stadium. It is 82 feet high, and has a total of 85,000 square feet. Due to the potential for inclement weather in Laramie, it will be a highly useful tool in recruiting and protection from the elements. When completed it will incorporate a plaza area between the RAC and lobby of the IPF that will be beautifully landscaped. It was completed at the end of 2007 at a total cost of $11 million.

Currently the athletic department has several projects regarding athletics facilities on its platter. Continual improvements to War Memorial Stadium are being planned. The addition of luxury boxes are in the planning stages, as well as a on the east side of the stadium. Paving the parking lot is also planned for the near future. Indoor tennis facilities are also on the agenda. In a recent interview, Tom Burman also mentioned that he would like the Arena-Auditorium to be state of the art, and would like to add luxury suites.