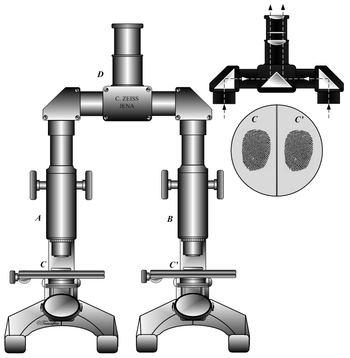 A comparison microscope is a device used to analyze side-by-side specimens. It consists of two microscopes connected by an optical bridge, which results in a split view window enabling two separate objects to be viewed simultaneously. This avoids the observer having to rely on memory when comparing two objects under a conventional microscope.

In the 1920s forensic ballistics was waiting at its inception. In 1929, using a comparison microscope adapted for the purpose by Calvin Goddard and his partner Phillip Gravelle used similar techniques to absolve the Chicago Police Department of participation in the St. Valentine's Day Massacre.

During the 1960s there were proposals to computerize the process of microscopic comparisons of fired ammunition components, but at that time neither the software nor the hardware existed to implement the theories. By the 1980s high-capacity computer systems adapted to the requirements of digital imaging, pattern recognition, image storage and comparison algorithms were available. Cooperation between private industry, law enforcement and forensic subject matter experts lead to the evolution of the Integrated Ballistics Identification System (IBIS) [2]

The modern instrument instrument has many optical, mechanical and electronic refinements, including fiber optic illumination, video capabilities, digital imaging, automatic exposure for conventional photography, etc. Despite this evolution, however, the basic tools and techniques have remained unchanged which are to determine whether or not ammunition components were fired by a single firearm based on unique and reproducible microscopic and class characteristics, or to reach a "no conclusion" result if insufficient marks are present.[2]

Since, ballistic identification has benefited from a long series of structural, scientific and technological advances, law enforcement agencies have established forensic laboratories and researchers have learned much more about how to match bullets and cartridge cases to the guns used to fire them, and comparison microscopes have become more sophisticated. By the end of the 1980s, ballistic identification was an established sub-specialty of forensic science.

Visualization tools have also been developed to allows the firearms examiner to verify the degree of similarity between any two tool-marks in question. These are designed to simulate the operation of the comparison microscope but is capable of rendering a 2D view of the 3D surfaces in a manner similar to that of the conventional comparison microscope. It also enables the examiner to translate one tool mark or striae with respect to the other, overlap them, modify illumination conditions, zoom in and out, adjust the point of view of the user, and even provides the ability to create a split image on the screen that includes a hair-line to demarcate one tool-mark on the left of the screen from the other on the right. A unique characteristics of visualization tools include their ability to simulate any material or "palette" which may be useful to the user as well as adjustment of the angle of incidence of the light and the light intensity that can assist in emphasizing certain features in the 3-D images.

With advances in digital imaging technology and data storage capacity, forensic examiners proposed the establishment of a centralized database of images of bullets and cartridge cases that could be compared against a bullet or cartridge case recovered from a crime scene. By the mid 1990s, two such systems emerged in the United States.[3] The first system, developed by the Federal Bureau of Investigation (FBI), was called "Drugfire." Drugfire used imaging software to capture, catalog and compare digital images of cartridge cases, bullets were added later. A forensic examiner would capture an image of a recovered bullet or cartridge and compare it with similar images from the database. Drugfire enabled the examiner to see many images of potential matches on one screen, greatly speeding up the process. However, Drugfire did not rank the images by how close a match they were, leaving that determination entirely to the examiner. More than 170 law enforcement agencies nationwide participated in the Drugfire program. The second system, developed by the Bureau of Alcohol, Tobacco and Firearms (ATF), was originally called "Ceasefire." Like Drugfire, Ceasefire used imaging software to capture images of the markings on bullets and included a sophisticated comparison algorithm that automatically identified likely matches. Rather than requiring the examiner to sift through dozens or hundreds of images, the computer presented the examiner with a ranked list of the most likely matches. When the ATF expanded Ceasefire to include cartridge cases, it renamed the program the Integrated Ballistics Identification System (IBIS).

In 1997, the ATF and the FBI agreed to try to combine Drugfire and IBIS to reduce the cost and inefficiency of maintaining both systems. However, technical obstacles prevented the integration of the two systems. After several years a compromise solution emerged. The new system would adopt IBIS's imaging technology and comparison algorithms while relying on the FBI's telecommunications network. Although a few devotees continued to use Drugfire on their own, IBIS became the standard centralized system. The National Integrated Ballistic Information Network (NIBIN) was born.[4]

The prevalence of hand-gun related crime in the United States compared to most other developed countries provided the impetus for the development of the comparison microscope.[citation needed] As with most firearms, the fired ammunition components may acquire sufficient unique and reproducible microscopic marks to be identifiable as having been fired by a single firearm. Making these comparisons is correctly referred to as firearms identification, or sometimes called as "ballistics".

Historically, and currently, this forensic discipline ultimately requires a microscopic side-by-side comparison of fired bullets or cartridge cases, one pair at a time, by a forensic examiner to confirm or eliminate the two items as having been fired by a single firearm. For this purpose, the traditional tool of the firearms examiner has been what is often called the ballistics comparison microscope.

The interior of a gun's barrel is machined to have grooves (called rifling) that force the bullet to rotate as it travels along it. These grooves and their counterpart, called "lands" imprint groove and land impressions on the surface of the bullet. Together with these land and groove impressions, imperfections on the barrel surface are incidentally transferred to the bullet's surface. Because these imperfections are randomly generated, during manufacture or due to use, they are unique to each barrel. These patterns or imperfections, therefore, amount to a "signature" that each barrel imprints on each of the bullets fired through it. It is this "signature" on the bullets imparted due to the unique imperfections on the barrel that enable the validation and identification of bullets as having originated from a particular gun. Comparison microscope is used to analyze the matching of the microscopic impressions found on the surface of bullets and casings.

Forensic innovator Calvin Goddard offered ballistic identification evidence in 1921 to help secure convictions of accused murderers and anarchists Nicola Sacco and Bartolomeo Vanzetti. On April 8, 1927, Sacco and Vanzetti were finally sentenced to death in the electric chair. A worldwide outcry arose and Governor Alvin T. Fuller finally agreed to postpone the executions and set up a committee to reconsider the case. By this time, firearms examination had improved considerably, and it was now known that an automatic pistol could be traced by several different methods if both bullet and casing were recovered from the scene. Automatic pistols could now be traced by unique markings of the rifling on the bullet, by firing pin indentations on the fired primer, or by unique ejector and extractor marks on the casing. The committee appointed to review the case used the services of Calvin Goddard in 1927. Goddard used Philip Gravelle's newly-invented comparison microscope and helixometer, a hollow, lighted magnifier probe used to inspect gun barrels, to make an examination of Sacco's .32 Colt, the bullet that killed Berardelli, and the spent casings recovered from the scene of the crime. In the presence of one of the defense experts, he fired a bullet from Sacco's gun into a wad of cotton and then put the ejected casing on the comparison microscope next to casings found at the scene. Then he looked at them carefully. The first two casings from the robbery did not match Sacco's gun, but the third one did. Even the defense expert agreed that the two cartridges had been fired from the same gun. The second original defense expert also concurred. The committee upheld the convictions. In October 1961, ballistics tests were run with improved technology using Sacco's Colt automatic. The results confirmed that the bullet that killed the victim, Berardelli in 1920 came from the same .32 Colt Auto taken from the pistol in Sacco's possession. Subsequent investigations in 1983 also supported Goddard's findings.

Colonel Goddard was the key forensic expert in solving the 1929 St. Valentine's Day Massacre in which seven gangsters were killed by rival Al Capone mobsters dressed as Chicago police officers. It also led to the establishment of the United States' first independent criminological laboratory, which was located at Northwestern University and headed by Goddard. At this new lab, ballistics, fingerprinting, blood analysis and trace evidence were all brought under one roof. In 1929, using a comparison microscope adapted for the ballistics comparison by his partner, Phillip Gravelle, Goddard used similar techniques to absolve the Chicago Police Department of participation in the St. Valentine's Day Massacre.[4] The case of Sacco and Vanzetti, which took place in Bridgewater, Massachusetts, is responsible for popularizing the use of the comparison microscope for bullet comparison. Forensic expert Calvin Goddard's conclusions were upheld when the evidence was re-examined in 1961.