The Churchill River (French: Rivière Churchill)[3] is a major river in Alberta, Saskatchewan and Manitoba, Canada. From the head of the Churchill Lake it is 1,609 km long.[4] It was named after John Churchill, 1st Duke of Marlborough and governor of the Hudson's Bay Company from 1685 to 1691. The Cree name for the river is Missinipi, meaning "big waters".[5]

Located entirely within the Canadian Shield, its source is in Central-East Alberta (Beaver Lake (Alberta), Beaver River (Canada), Sand River (Alberta), Cold Lake, Winefred River), which flow into a series of lakes in Saskatchewan (Churchill Lake, Peter Pond Lake, Lac Île-à-la-Crosse). The main tributary, the Beaver River (Canada), joins at Lac Île-à-la-Crosse. Nistowiak Falls — the tallest falls in Saskatchewan — are on the Rapid River, which flows north, out of Lac la Ronge into Nistowiak Lake on the Churchill just north of La Ronge.

A large amount of flow of the Churchill River after Manitoba - Saskatchewan border comes from the Reindeer River, which flows from Wollaston and Reindeer lakes. Flow from Reindeer Lake is regulated by the Whitesand Dam. From there, the Churchill River flows east through a series of lakes (Highrock, Granville, Southern Indian and Gauer), then flows via a diversion for hydro-electric generation into the Nelson River (60% of flow), and the rest flows as the Churchill River into Hudson Bay at Churchill, Manitoba.[6]

The Churchill formed a major part of the "voyageur highway" in the 17th to 19th centuries after Dene people showed Peter Pond the Methye Portage which connects the Hudson Bay watershed with the Clearwater – Athabasca – MacKenzie rivers which flow to the Arctic Ocean.[7] See Canadian Canoe Routes (early). 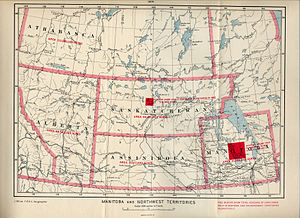