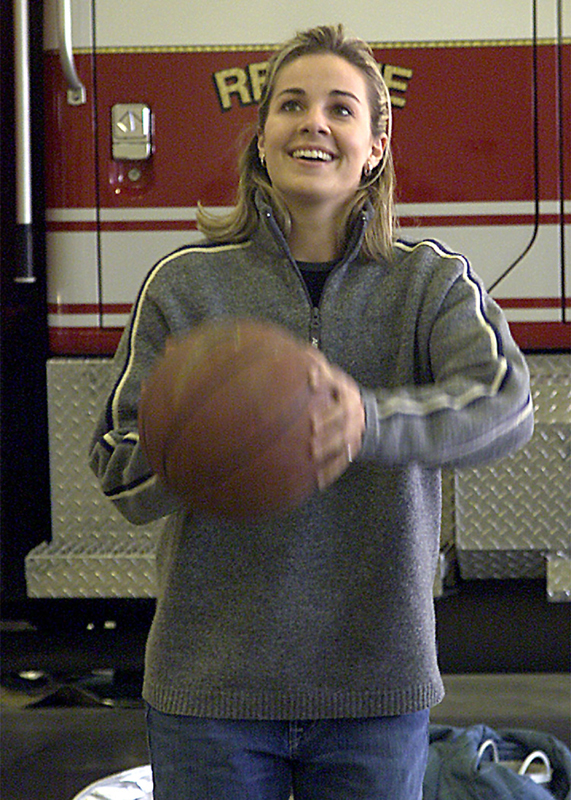 Rebecca Lynn "Becky" Hammon ( _ru. Ребекка Линн Хаммон; born , ) is a professional basketball player currently under contract with the of the WNBA.

Hammon grew up as the youngest of three children

Hammon had a distinguished career at Colorado State. Her prolific scoring made her an n as well as Colorado Sportswoman of the Year. She led her team to a 33-3 record in the 1998-1999 season and helped them advance to the NCAA Tournament's Sweet Sixteen. She was the WAC Mountain Division player of the year for the 1998-1999 season and surpassed player as the WAC's all-time leading scorer.

Undrafted during her rookie season, Hammon was signed to the WNBA on , and joined the . She had a surprisingly solid rookie season statistically, backing up starting . Her aggressive play at both ends of the court quickly impressed the coaching staff and made her a favorite among Liberty fans. After the 2003 season, Hammon took over for Teresa Weatherspoon as the Liberty's starting point guard and along with and , became one of the team's co-captains in 2004.

In her first season in 2003 with the Tennessee Fury of the (National Women's Basketball League), Hammon led the league in scoring, averaging 20.6 points per game. In 2004, Hammon signed with the Colorado Chill, a new team to the NWBL, but played in only 2 games because of a knee injury she sustained in the 2003 season when playing for the New York Liberty.

Primarily used to provide instant points off the bench, Hammon finally had a breakout season in 2003, providing much-needed offense for the Liberty. However, her season was cut short by a knee injury.

When aging star was not re-signed by the team that year, Hammon was thrust into the starting point guard role. She would help guide the Liberty to a playoff berth in 2004 amongst very close competition in the Eastern Conference.

On , Hammon represented the WNBA All-Stars in the WNBA vs. USA basketball game that pitted the 2004 USA Women's Basketball team against WNBA players at . On August 16, 2005, Hammon scored her 2000th WNBA career point. At the end of the 2005 season, she was named to the All-WNBA Second Team.

In 2005, in a rematch of the previous year's championship game, Hammon and the Chill defeated her old team and won their first NWBL title. Hammon received the game's Most Valuable Player award with 31 points, 6 assists and 3 steals.

In 2006, Hammon was named Most Valuable Player of the NWBL, leading the Chill to a second straight Pro Cup title.

In the 2006-07 WNBA offseason, Hammon finally made New York her offseason home.

In January '07 she moved to Spanish League and played for Rivas Futura.

Hammon had her best season of her career in 2007 posting career high averages of 18.8 ppg (fourth best) and 5.0 apg (first in WNBA). She is also an MVP candidate after leading the Silver Stars to a 20-14 record and the second seed in the Western Conference. While in San Antonio, Hammon earned the nickname, "Big Shot Becky" because of her ability to hit shots in clutch moments. It comes from the nickname "Big Shot Rob" given to forward, . [cite web|url=http://www.slate.com/id/2121018/|title= Sideshow Bob|accessdate= 2008-06-15|last= Gillette|first= Felix|date= 2005-06-16|publisher= slate.com]

Becky averaged 17.6 ppg, and 4.9 apg as she led the Silver Stars to a WNBA best record 24-10 and led them into the playoffs for a second straight year. In the conference semi finals, Becky scored 30 pts in a Game 1 win against the Sacramento Monarchs. They would eventually win the series and advance to the conference finals. San Antonio would lose the first game to the Los Angeles Sparks led by Lisa Leslie and Candace Parker. In Game 2, Sophia Young hit a buzzer beater shot at the end of regulation and stave off elimination as they beat the Sparks 67- 66. In Game 3, Becky scored a new playoff career high 35 pts and the San Antonio Silver Stars won the Western Conference championship. They advanced to the WNBA finals for the first time in franchise history.

After not being selected for the U.S. Women's National Basketball Team despite being WNBA MVP runner-up, Hammon announced she would try to claim a roster slot on the n basketball team in the in Beijing, [cite web|url=http://sports.espn.go.com/oly/olybb/news/story?id=3336490|title= Hammon's Olympic dream puts her in Russian uniform|accessdate= 2008-05-27|last= Drehs|first= Wayne|date= 2008-04-08|publisher= ESPN.com] . Coach , coach of the 2008 United States Women's Olympic Basketball team said concerning Hammon's decision, "If you play in this country, live in this country and you grow up in the heartland - and you put on a Russian uniform - you are not a patriotic person, in my mind." [ [http://hamptonroads.com/2008/06/she-stayed-true-her-olympic-dream-now-shes-called-traitor "She stayed true to her Olympic dream. Now she's called a traitor." ] (, ) hamptonroads.com] This has fueled controversy in which Hammon has been labeled a traitor for choosing to directly compete against her country in an event long predicated on nationalistic pride. [ [http://www.newsday.com/sports/basketball/ny-spbarker0610,0,4916497.column "Is Becky Hammon a traitor or savvy capitalist?] (, ) newsday.com] Hammon responded to Donovan by implying that she was not considered for the U.S. team because of team politics: "True patriotism would be giving everybody a fair shot, an equal opportunity and to not play politics. That would be a very American and patriotic thing to do." [http://sports.espn.go.com/oly/news/story?id=3427182]

Hammon became a Russian citizen earlier in 2008. The coach of Russia's team, Igor Grudin, is also the sports director of the CSKA team that Hammon plays for in Moscow during the WNBA off-season. The announcement that she would participate in camps for the Russian national team came the same day that it was also announced that national team player (and CSKA teammate of Hammon's) Olga Arteshina had become pregnant. Hammon also signed a three-year extension with the CSKA team at around the same time she was named as a prospect for the national team.

Hammon was held to 1/6 from the field in a 67-52 loss to the United States in the 2008 Olympic Semifinals, [ [http://www.nbcolympics.com/basketball/resultsandschedules/rsc=BKW400202/index.html Semifinals] ] but helped the Russian team to win the bronze medal, by scoring 22 points against China. [ [http://www.nbcolympics.com/basketball/news/newsid=251568.html#hammon+helps+russia+second+straight+bronze "Hammon helps Russia to second straight bronze. U.S.-born naturalized Russian citizen scores 22"] , Associated Press, , 2008.]

In 2006, Hammon began working during the WNBA offseason as a sideline reporter for telecasts of basketball games. Her first broadcast was a Spurs-Cavs game in San Antonio on November 3, 2006. [cite web|url=http://www.wnba.com/liberty/news/BeckyESPN.html|title=Hammon Taking on the NBA|accessdate= 2008-05-27|date=2006-10-31|location=New York, NY|publisher=WNBA.com] [cite web|url=http://www.wnba.com/shock/news/cash_espn_061116.html|title=Swin Cash ...|accessdate= 2008-05-27|publisher=WNBA.com]