Côtes du Luberon is a French wine-growing AOC in the southeastern extreme of the Rhône wine region of France, where the wines are produced in 36 communes of the Vaucluse département. The neighbouring appellation of Côtes de Ventoux AOC stretches along its northern border and is separated by the Calavon river. The southern limit of the region is marked by the Durance river. 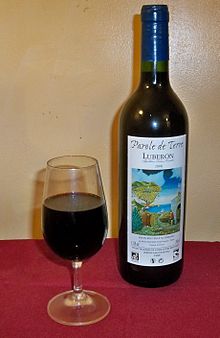 A red wine from the Côtes du Luberon.

Rosé: The same varieties are used as for the red, and up to 20% of the allowed varieties for white wine may be used.

White wines from Clairette, Grenache Blanc, Ugni Blanc, maximum 50%, Roussanne and Marsanne together to a maximum of 20%.

The minimum alcohol for all three colours is decreed at 11%.

The reds are well balanced and flexible, the rosés fresh and nervous, and the whites are fresh and well rounded. All wines are generally consumed while they are still young.