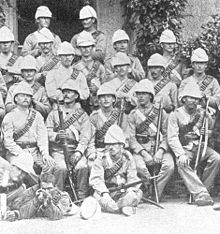 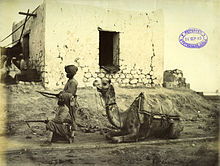 The Nile Expedition, sometimes called the Gordon Relief Expedition (1884–85), was a British mission to relieve Major-General Charles George Gordon at Khartoum, Sudan. Gordon had been sent to the Sudan to help Egyptians evacuate from Sudan after Britain decided to abandon the country in the face of a rebellion led by self-proclaimed Mahdi, Mahommed Ahmed. A contingent of Canadians was recruited to help the British navigate their small boats up the Nile River. The Nile Expedition was the first overseas expedition by Canadians in a British imperial conflict, although the Nile Voyageurs were civilians employees and did not wear uniforms.

The expedition and its background are vividly described in Winston Churchill's book The River War.

Not wanting to be involved in the costly suppression of the rebellion led by Mahommed Ahmed, Britain ordered Egypt to abandon its administration of the Sudan in December 1883. The British government asked General Gordon, former Governor-General of Sudan, to go to Khartoum and aid in the evacuation of Egyptian soldiers, civilian employees and their families. Traveling from London, General Gordon reached Khartoum on February 18, 1884. He immediately began sending women, children and wounded soldiers back to Egypt as the military situation deteriorated in the Sudan and the south of the country was in danger of being cut off from Egypt by the Islamic Mahdist army. Britain withdrew its troops from the Sudan until Khartoum was the last outpost remaining under British control.

Gordon differed with the British government's decision to abandon the Sudan. He thought that the Islamic revolt had to be crushed for fear that it might eventually overwhelm Egypt. He based this on the Mahdi’s claim of dominion over all Islamic lands. Defying orders from the British government to withdraw, General Gordon, leading a garrison of 6,000 men, began the defence of Khartoum. On March 18, 1884, the Mahdist army laid siege to the city. The rebels stopped river traffic and cut the telegraph line to Cairo. Khartoum was cut off from resupply, which led to food shortages, but could still communicate with the outside world by using messengers. Under pressure from the public, in August 1884, the British government decided to reverse its policy and send a relief force to Khartoum.

The Expedition was put under the command of General Garnet Wolseley, who had seen service in the Crimean War, Canada, the Gold Coast and southern Africa. The Expedition was composed of two officers and 43 soldiers from each British Light Cavalry Regiment.[1]

Wolseley decided that the best way of reaching Khartoum would be to ascend the Nile River. Based on his favourable experience with them during his expedition along the Red River to Fort Garry (now Winnipeg) in 1869–1870 to suppress the Red River Rebellion, Wolseley asked the Governor General of Canada, Marquess Landsdowne[2], if it would be possible to recruit a contingent of Canadian voyageurs to help him navigate the Nile. He requested that they be commanded by Lieutenant-Colonel Fred C. Denison, who had served as Wolseley’s aide-de-camp during the Red River expedition[3]. The Prime Minister of Canada, Sir Wilfrid Laurier, did not object once he was assured that the voyageurs[4] were volunteers and would be paid by the British. Denison complied and on September 15, 1884, only 24 days after the request was received, 386 voyageurs set sail for Egypt.

The Canadians were known at the time as the Nile Voyageurs. As the traditional role of the voyageur was waning, most were formerly employed helping transport log booms down rivers such as the Ottawa, Gatineau and Saguenay. Eighty-six of the voyageurs were members of the First Nations, mostly Caughnawaga,[5] an offshoot from the Mohawk and Ojibwa.

On October 7, 1884, the Canadians reached Alexandria and headed south by a combination of river steamer and train. On October 26, 1884, the Canadians met Wolseley and his force of 5,400 soldiers at Wadi Halfa. By November they were at the first of six cataracts and began their work of ascending the rapids. The southern progress of the expedition sped up with the experienced voyageurs manning the boats. The boats that Wolseley selected were modified Royal Navy whalers. They were almost ten metres long, two metres wide and three-quarters of a metre deep, and was equipped with twelve oars, two masts and a removable rudder. The boats had the capacity for a dozen men along with enough cargo to supply them for a hundred days.

In mid-November, the expedition received word from General Gordon that he could only survive the siege for another forty days. The expedition was attacked by rebels at Abu Klea and Abu Cru, but was able to repel the rebels both times. Progress up the river was slow and often the boats had to be pulled through rapids by rope from shore. At several places the strength of the current necessitated several crews pulling one boat. They settled on a method of stationing the voyageurs at difficult stretches along the river, so that each group would become familiar with a particular stretch of water.

Realizing that time was running out for General Gordon in Khartoum, Wolseley split his force into two columns. He sent 2,400 men by camel on a 280 km shortcut across the desert to avoid the Great Bend of the Nile and reach the city sooner. The remaining 3,000 soldiers continued up the river.

The Canadians’ six-month contracts were soon to expire and they were asked to re-enlist. Though offered generous inducements, only 86 of the voyageurs, including their commander, Denison, signed up for a second six-month contract. The rest elected to return to Canada, hoping to arrive in time for the spring logging season. This did not halt the expedition, as the worst of the river was already behind them and the smaller number of soldiers traveling by river reduced the need for the Canadians. Denison and his men continued piloting the small boats up the river.

General Gordon’s last entry in his journal, dated 14 December 1884, read, “Now mark this, if the Expeditionary Force, and I ask for no more than 200 men, does not come in ten days, the town may fall; and I have done my best for the honour of our country. Good bye.” [6]

On January 26, 1885, Khartoum fell to the Mahdist army of 50,000 men. At that time of year the Nile was shallow enough to cross by wading and the Mahdists were able to breach the city’s defenses by attacking the poorly-defended approaches from the river. The entire garrison was slaughtered, including General Gordon. His head was cut off and delivered to the Mahdi. Two days later the relief expedition entered the city to find that they were too late.

After the Fall of Khartoum

Emboldened by their victory at the Battle of Khartoum, the Mahdists attacked the British column ascending the river at Kirbekan, but were repulsed.

The British force retreated to Egypt. With the fall of Khartoum, Muhammad Ahmad controlled the whole of Sudan, allowing him to establish an Islamic state governed by Sharia law. He died less than six months later. His state survived him, but Sudan was re-conquered by the British in a campaign from 1895 to 1898, led by Lord Kitchener.

On April 17, 1885, the Canadian contingent set sail from Alexandria for home. Sixteen Canadians had died on the expedition. They are memorialized in Canada’s Peace Tower, which recognizes all of Canada’s war dead. Wolseley wrote a letter to the Canadian Governor General praising the Canadians' service and the British Parliament passed a motion thanking them for their efforts.