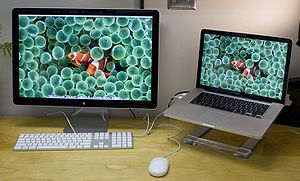 The Apple Cinema Display was a line of flat panel computer monitors introduced in September 1999 by Apple Inc. It was initially sold alongside the older line of Studio Displays, but eventually replaced them. In July 2011, Apple replaced it with the Apple Thunderbolt Display. Apple offered 20-, 22-, 23-, 24-, 27- and 30-inch sizes, with the last model being a 27-inch size with LED backlighting.

There have been three designs for the Cinema Display, one featuring polycarbonate plastic and two featuring anodized aluminum. The first displays were designed to match the colorful plastic of the Power Mac G3 and later the Power Mac G4 while the second revisions were designed to match the more professional aesthetics of the Power Mac G5 and PowerBook G4. The last available design matched the unibody laptops released in October 2008. The newer Thunderbolt Display uses the same design as the 27-inch size Cinema LED Display.

The first model—the 22-inch Apple Cinema Display—was introduced in September 1999 alongside the Power Mac G4 and used DVI for video input. It was enclosed in a high-density plastic frame with an easel-style stand and had a display resolution of 1600 × 1024. This model was upgraded in July 2000 with the Apple Display Connector (ADC), which ran DVI, USB, and 25V power through a single connector. It was eventually replaced by a 20-inch model on January 28, 2003 that sported a widescreen display with up to 1680 × 1050 resolution.

On June 28, 2004, Apple introduced a redesigned line of Cinema Displays, along with a new 30-inch model that, like the 23-inch model, carried the "Cinema HD Display" name. The new models had an anodized aluminum enclosure that matched Apple's high-end lines of professional products. An alternative stand or a wall mount could be used with a VESA mount adapter kit that was sold separately. Though the display enclosures had not been redesigned for a long period of time, several "silent" improvements were made to the brightness levels and contrast ratios.[1]

With the introduction of the 24-inch LED Cinema Display in October 2008, the 23-inch Cinema HD Display was discontinued. The 20-inch model was also discontinued in February 2009, leaving the 30-inch display as the only model left.

As of August 2010, the Mac Pro is the only current Macintosh sold with a dual-link DVI adapter. However, all current Macs come with a Mini DisplayPort connector which can be used with a separately sold adapter[2] to run the 30-inch display.

All Power Mac G5, PowerBook G4, and Mac Pro models that were introduced after the 30-inch model was released are capable of supporting it without the use of any adapters. Discrete construction MacBook Pros are also capable of driving the 30-inch display, while all Macs released after October 2008 (with the exception of the Mac Pro) require an additional adapter. The 30-inch Cinema Display was introduced together with the GeForce 6800, which supports two DVI-DL ports. ATI's aftermarket AGP X800 Mac Edition, which is only compatible with the Power Mac G5, also supports dual-link DVI, but has only one port. The Radeon 9600 Mac/PC was another aftermarket graphics card that supported dual-link DVI and was also compatible with older AGP-based Power Macs.

If a computer with a single-link DVI port (such as a Mac laptop with a mini-DVI connector) is connected to the 30-inch display, it will only run at 1280 × 800, even if the computer is capable of supporting 1920 × 1200 over a single-link connection.

Since the transition on October 14, 2008 to the Aluminum models, Apple removed the matte, anti-glare screen as an option for its Cinema Displays. As a consequence, the Cinema Displays have been available from Apple only with a glossy screen. Apple removed the matte screen option from its line of iMac desktop computers on August 7, 2007, so Apple does not offer any desktop equipment with a matte, anti-glare screen. This has caused concern among a sizeable segment of users that need matte screens for their particular area of work, for example, graphic designers, photographers, and users that view their screens for many hours per day.[3] A common complaint is that the reflections from the glossy screen can lead to eyestrain and headaches among a certain percentage of the population who are prone to eyestrain, known as Computer vision syndrome. The Wall Street Journal referred to Apple's removal of the matte screen as one of Apple's worst design decisions.[4] Apple's decision to remove a matte, anti-glare screen option from its desktop product line seems at odds with polls which indicate that anywhere from 50-75% of users prefer matte screens.[5][6] A report from the University of Queensland in Australia indicated that there could be long term adverse health effects from prolonged use of glossy screens on Apple computers.[7] This has raised questions on the suitability of Apple desktop equipment for use for work in offices in the European Union since there are E.U. regulations in place that specify that a computer "screen shall be free of reflective glare and reflections liable to cause discomfort to the user".[8]

On October 14, 2008, the 23-inch Cinema Display was replaced with a 24-inch model made with aluminium and glass which had a similar appearance to the latest iMac, MacBook Pro and unibody MacBook designs. The display features a built-in iSight camera, microphone, and dual speaker system. A MagSafe cable runs from the back of the display for charging notebooks. It is the first Cinema Display to use LED backlighting and the Mini DisplayPort for video input. This display is only officially compatible with Macs that have the Mini DisplayPort connector. A third-party converter must be used in order to use this display with older Macs.

On July 20, 2011, the Cinema Display line stopped being marketed by Apple in their stores. It was superseded by the Apple Thunderbolt Display. However, it is still sold online via the Apple Store's Website