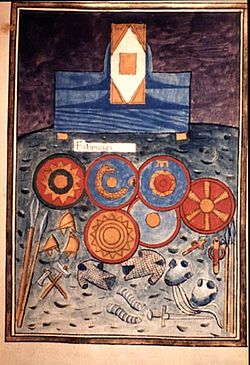 The insignia of the Eastern magister officiorum as displayed in the Notitia Dignitatum: the codicil of his office on a stand, shields with the emblems of the Scholae regiments, and assorted arms and armour attesting the office's control of the imperial arsenals.

The magister officiorum (Latin literally for "Master of Offices", in Greek: μάγιστρος τῶν ὀφφικίων, magistros tōn offikiōn) was one of the most senior administrative officials in the late Roman Empire and the early centuries of the Byzantine Empire. In Byzantium, the office was eventually transformed into a senior honorary rank, until it disappeared in the 12th century.

Although some scholars have supported its creation under Emperor Diocletian (r. 284–305), the office can first be definitely traced to the rule of Roman emperor Constantine I (r. 306–337), in 320. Constantine probably created it in an effort to limit the power of the praetorian prefect (praefectus praetorio), until then the Roman emperor's chief administrative aide.[1][2] The magister supervised the palatine secretariat, divided into four bureaux, the sacra scrinia, each under a respective magister: the scrinium memoriae, the scrinium epistularum, the scrinium libellorum and the scrinium epistolarum Graecarum.[3][4] The first bureau handled imperial decisions called annotationes, because they were notes made by the Roman emperor on documents presented to him, and also handled replies to petitions to the Roman emperor. The second handled correspondence with foreign potentates and with the provincial administration and the cities, the third dealt with appeals from lower courts and petitions from those involved in them, and the fourth handled the documents issued in Greek and the translation of Latin documents into Greek.[4] Another important duty transferred to the office by Emperor Constantine was the supervision of the agentes in rebus, a corps of trusted messengers who also functioned as controllers of the imperial administration.[2] Especially this control of the feared agentes, or magistriani, as they were colloquially known, gave the office great power.[1] The office rose quickly in importance: initially ranked as a tribunus, by the end of Emperor Constantine's reign the magister was a full comes.[5]

The office's powers were further enhanced in 395, when Emperor Arcadius (r. 395–408) removed the purview of the Public Post (Latin: cursus publicus, Greek: δημόσιος δρόμος), the palace guard (Scholae Palatinae) and the imperial arsenals (fabricae) from the praetorian prefecture and handed them to the magister.[6] These last changes are reflected in the Notitia Dignitatum, a list of all offices compiled circa 400.[7] Sometime in the 5th century, the Eastern magister also assumed authority over the limitanei border guards.[1]

In the course of time, the office also took over the coordination of foreign affairs (already in the late 4th century, the official translators and interpreters were under the control of the magister officiorum for this reason), and in the East, the Notitia records the presence of four secretaries in charge of the so-called Bureau of Barbarians under the magister's supervision.[7] One of the most important incumbents of this office was Peter the Patrician, who held the position from 539 to 565 and undertook numerous diplomatic missions in this role for Emperor Justinian I (r. 527–565). The office was also retained in Ostrogothic Italy after the fall of the Western Roman Empire, and was held by eminent Roman senators such as Boethius and Cassiodorus.[8]

The office survived as a bureaucratic function in the eastern (or Byzantine) half of the Roman Empire, but during the late 7th or the 8th century, most of the office's administrative functions were removed, and it was converted into the dignity of magistros (Greek: μάγιστρος, female form magistrissa, μαγίστρισσα).[1][9] At least until the time of Emperor Leo VI the Wise (r. 886–912), however, the full former title was remembered: his powerful father-in-law, Stylianos Zaoutzes, is recorded once again as "master of the divine offices" (Greek: μάγιστρος τῶν θείων ὀφφικίων).[10][11] In his administrative functions, the magister officiorum was replaced chiefly by the logothetēs tou dromou, who supervised the Public Post and foreign affairs,[12] while the imperial bodyguard was transformed into the tagmata.

Until the reign of Emperor Michael III (r. 842–867) there seem to have been only two magistroi, the senior of whom was termed prōtomagistros (Greek: πρωτομάγιστρος, "first magistros"), and who was again one of the senior ministers of the state (without specific functions) and head of the Byzantine Senate. From the reign of Emperor Michael III on, the title was conferred on more people, effectively becoming a court rank, the highest in the Byzantine hierarchy until the introduction of the proedros in the mid-10th century.[13] The List of Precedence (Klētorologion) of Philotheos, written in 899, implies the existence of 12 magistroi, while during the reign of Emperor Nikephoros II Phokas (r. 963–969), Liutprand of Cremona recorded the presence of 24.[1][12] The rank continued in existence thereafter, but lost increasingly in importance. In the late 10th and 11th centuries, it was often held in combination with the title of vestēs. From the late 11th century it was considerably devalued, especially in the Komnenian period, and disappeared entirely by the mid-12th century.[14]