Cathedral of the Immaculate Conception in Beijing

Cathedral of the Immaculate Conception in Beijing 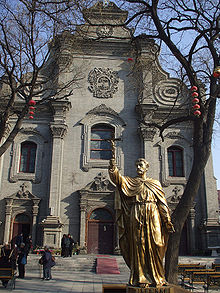 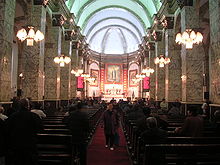 The Cathedral of the Immaculate Conception in Beijing (宣武门天主堂), (pinyin:Xuānwǔmén Tiān Zhǔtáng) also known as Nantang (南堂, the South Cathedral) to the locals, is a historic Roman Catholic Church located in Beijing, China. While the original foundation of the cathedral was in 1605, making it the oldest Catholic church in Beijing, the current building in the Baroque style dates from 1904.[1] The present Archbishop Joseph Li Shan, installed in September 2007, is one of the few bishops openly recognized by both the Chinese Patriotic Catholic Church and the Vatican.

The Cathedral of the Immaculate Conception, as a foundation, dates back to 1605, in the thirty-third year of the reign of the Emperor Wanli of the Ming Dynasty. When the Italian Jesuit Matteo Ricci arrived in Beijing, the Emperor permitted him a residence slightly to the west of the site of the current cathedral, in the Xuanwumen district. Attached to this residence was a small chapel, in Chinese style, with only the presence of a cross atop the entrance to distinguish it as a church. This was at the time referred to as the Xuanwumen Chapel (宣武门礼拜堂).

In 1650, in the seventh year of the reign of the Emperor Shunzhi of the Qing Dynasty, under the leadership of the German Jesuit Johann Adam Schall von Bell, work on a new church building was begun on the site of the Xuanwumen Chapel. Construction of was complete in two years, and the new church received the honour of a Ceremonial gateway with the words 'Respect the Teachings of the Way of Heaven' (钦宗天道).

Emperor Shunzhi was friendly to Schall and the church, visiting it no less than twenty four times, bestowing upon it a stone stela with the words 'built by Imperial Order' (敕建) inscribed upon it.

In 1690, Beijing received its first Roman Catholic bishop, the Franciscan Bernardin della Chiesa, and the church became a cathedral. 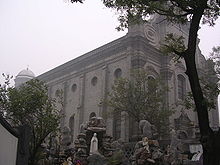 Nantang Cathedral from the North-West courtyard

In 1703, in the twenty fourth year of the reign of the Emperor Kangxi, the cathedral was enlarged and renovated, and after ten years, a European-style building was complete, the second European-style building in Beijing after the Canchikou church. This was destroyed in 1720 by an earthquake in Beijing. A new cruciform structure was built in the baroque style, with a length of 86 metres and width of 45 metres. This was again severely damaged by an earthquake in 1730, in the eighth year of the Emperor Yongzheng, who donated 1000 taels of silver towards its repair. The repaired cathedral had larger and taller windows, resulting in a brighter and grander interior.

The cathedral was damaged by fire in 1775, this being the fortieth year of the reign of the Emperor Qianlong, who donated 10,000 taels of silver for restoration work, and also bestowed a calligraphed board in the Emperor's own hand, inscribed with the characters '万有真原' on it, meaning 'The True Origin of All Things'.

In 1904, the present structure was completed, the fourth church on the site. On 21 December 1979, Bishop Michael Fu Tieshan was consecrated in the cathedral, the first major event in the life of the Catholic Church in China after the Cultural Revolution.