Year Zero is an alternate reality game (ARG) based on the Nine Inch Nails concept album of the same name, its expected follow-up, and a possible accompanying film or television project.[1] Although the album was released on April 16, 2007 in Europe, and the following day worldwide,[2] the game has been underway since roughly February 12, 2007 and was expected to continue for approximately eighteen months.[3] The game was created by 42 Entertainment, the same group responsible for the Halo 2 promotional alternative reality game I Love Bees.[4][5] Trent Reznor, frontman and sole member of the band, has called the game "a new entertainment form".[4] In response to criticism[6] regarding the promotion of the album, Reznor stated:

The term "marketing" sure is a frustrating one for me at the moment. What you are now starting to experience IS "year zero". It's not some kind of gimmick to get you to buy a record - it IS the art form... and we're just getting started. Hope you enjoy the ride.[7] 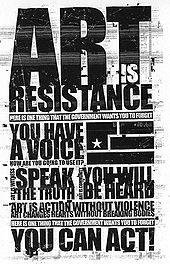 An Art is Resistance flier from the Year Zero ARG.

Reznor said that Year Zero is a concept album,[8] "could be about the end of the world", and marked a "shift in direction" in that it "doesn't sound like With Teeth."[7] The 2006 tour merchandise designs featured overt references to the United States military, which "reflects future directions."[7]

In an interview with Gigwise.com, Reznor stated that the concept behind Year Zero was partially inspired by his feelings toward the Bush administration. He further explained,

I really wanted to focus on something that was at the forefront of my consciousness which is, as an American, I'm appalled by the behavior of our government, the direction that it has taken and the direction that it's taken everyone else in the world and its arrogance... I decided to write an essay about where the world might be if we continue down the path that we're on with a neo-con-esque government doing whatever it pleases...[9]

To this end, the storyline of Year Zero borrows heavily from such well-known dystopian fiction as George Orwell's Nineteen Eighty-Four (government surveillance), Aldous Huxley's Brave New World (use of drugs to subdue the populace), Ray Bradbury's Fahrenheit 451 (large-scale censorship and uniformism), and Yevgeny Zamyatin's We (synthesis of church and state). Specific plot elements bear a resemblance to the Philip K. Dick short story Faith of Our Fathers, including hallucinogens in the water supply, an oppressive, heavily militaristic state, aggressive government monitoring of the populace, and a venerated entity which manifests in many forms. In keeping with the dystopian theme, Year Zero takes place in 2022, the same year as the 1973 film Soylent Green.

The story takes place in the United States in the year 2022, which has been termed "Year 0", by the American government, being the year that America was reborn. The U.S. had suffered several major terrorist attacks, apparently by Islamic fundamentalists, including attacks on Los Angeles and Seattle. In response, the government granted itself emergency powers and seized absolute control on the country. The U.S. government is now a Christian fundamentalist theocracy, maintaining control of the populace through institutions like the Bureau of Morality and the First Evangelical Church of Plano. Americans must get licenses to marry, bear children, etc. Subversive activities can result in these licenses being revoked. Dissenters regularly disappear from their homes in the night, and are detained in federal detainment centers and sanitariums, if not executed.

The government corporation Cedocore distributes the drug Parepin through the water supply, making Americans who drink the water apathetic and carefree. There are several underground rebel groups, mainly operating online, most notably Art is Resistance and Solutions Backwards Initiative. The First Evangelical Church of Plano is a fundamentalist Protestant Christian church which is favored by the neo-conservative government.

Amidst all of this are increasing sightings of what is labelled "The Presence", which manifests as a pair of massive ghostly hands and arms extending down from the sky into the ground. Despite early attributions of The Presence to drug-induced mass hysteria, it soon becomes clear that it is a physical phenomenon capable of being recorded on video and film. Theories vary on the real cause of the appearances, but the prevailing opinion appears to be that the hands represent God or some other equivalent supernatural force. On February 10, 2022, a government official named Doug reports that sightings of the phenomenon are rapidly being reported from all over the world. The sequence ends with a broken message announcing the appearance of The Presence over the United States Capitol Building. The message cuts off suddenly, implying the end of the world.

Working to prevent this are the Solutions Backwards Initiative, which is a group of students, professors, and computer experts who devise a successful means with which to send information back through time using quantum mechanics in order to prevent the dystopian future (and eventual apocalypse) they live in from ever occurring. The websites and music of the Year Zero alternate reality game are implied to be part of the information packets sent back through the wormholes.

The concept behind the Year Zero alternate reality game, as well as avid fan participation in the game, has caught the attention of the media numerous times; USA Today and Rolling Stone have cited fan site The NIN Hotline, forum Echoing the Sound, fan club The Spiral, and NinWiki as sources for new discoveries.[10][11]

In March 2007 Kerrang! Radio reported that "Reznor admitted he's already in talks about a movie version of his upcoming album a concept piece, with part two scheduled for next year."[1] He had earlier noted Year Zero as "part of a bigger picture of a number of things I'm working on. Essentially, I wrote the soundtrack to a movie that doesn't exist."[8] Reznor has commented that he is currently more interested in a television project than a film project. He has stated that he has a producer and has met with writers.[12] On August 10, 2007, Reznor announced that they would soon be taking the concept to television networks in an attempt to secure a deal. "We're about to pitch it to the network, so we're a couple of weeks away from meeting all of the main people, and we'll see what happens."[13]

Since first announcing his plans for a television series, progress has slowed, reportedly due to the 2007–2008 Writer's Guild strike. Despite this, Reznor has reported that the project is "still churning along".[14]

Many reviewers of the Year Zero album also commented on the accompanying game. Ann Powers of The Los Angeles Times praised the album and game concept as "a total marriage of the pop and gamer aesthetics that unlocks the rusty cages of the music industry and solves some key problems facing rock music as its cultural dominance dissolves into dust."[15]