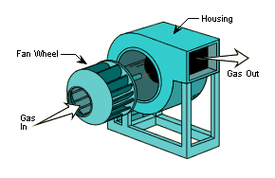 Figure 1: Components of a centrifugal fan

A centrifugal fan (also blower, or squirrel-cage fan, as it looks like a hamster wheel) is a mechanical device for moving air or other gases. It has a fan wheel composed of a number of fan blades, or ribs, mounted around a hub. As shown in Figure 1, the hub turns on a driveshaft that passes through the fan housing. The gas enters from the side of the fan wheel, turns 90 degrees and accelerates due to centrifugal force as it flows over the fan blades and exits the fan housing.[1]

For more details on this topic, see Centrifugal compressor.

Centrifugal fans can generate pressure increases in the gas stream. Accordingly, they are well-suited for industrial processes and air pollution control systems. They are also common in central heating/cooling systems.

The centrifugal fan was invented by Russian military engineer Alexander Sablukov in 1832, and found its usage both in the Russian light industry (such as sugar making) and abroad.[2]

The major components of a typical centrifugal fan include the fan wheel, fan housing, drive mechanism, and inlet and/or outlet dampers.

The fan drive determines the speed of the fan wheel (impeller) and the extent to which this speed can be varied. There are three basic types of fan drives.[1]

The fan wheel can be linked directly to the shaft of an electric motor. This means that the fan wheel speed is identical to the motor's rotational speed. With this type of fan drive mechanism, the fan speed cannot be varied unless the motor speed is adjustable. Often the motor has several electric wires. Air conditioning will then automatically provide faster speed because colder air is more dense.

A set of sheaves are mounted on the motor shaft and the fan wheel shaft, and a belt transmits the mechanical energy from the motor to the fan.

An alternate method of varying the fan speed is by use of an electronic variable-speed drive which controls the speed of the motor driving the fan. This offers better overall energy efficiency at reduced speeds than mechanical couplings.

Bearings are an important part of a fan.

Since lower speed fans which have a bearings in tough-to-get-to spots, Grease-packed anti-friction bearings are used.

Inlet dampers (Inlet vanes) reduce fan energy usage due to their ability to affect the airflow pattern into the fan.[1]

The fan wheel consists of a hub on which a number of fan blades are attached. The fan blades on the hub can be arranged in three different ways: forward-curved, backward-curved or radial.[1]

Backward-curved blades, as in Figure 3(b), use blades that curve against the direction of the fan wheel's rotation. The backward curvature mimics that of an airfoil cross section and provides good operating efficiency with relatively economical construction techniques. These types of fan wheels are used in fans designed to handle gas streams with low to moderate particulate loadings[citation needed]. They can be easily fitted with wear protection but certain blade curvatures can be prone to solids build-up.[citation needed]

Backward-curved fans are much more energy efficient than radial blade fans and so, for high power applications may be a suitable alternative to the lower cost radial bladed fan.[citation needed]

Radial fan blades, as in Figure 3(c), extend straight out from the hub. A radial blade fan wheel is often used on particulate-laden gas streams because it is the least sensitive to solids build-up on the blades, but it is often characterized by greater noise output. High speeds, low volumes, and high pressures are common with radial fans[citation needed], and are often used in vacuum cleaners, pneumatic material conveying systems, and similar processes.

Ratings found in centrifugal fan performance tables and curves are based on standard air SCFM. Fan manufacturers define standard air as clean, dry air with a density of 0.075 pounds mass per cubic foot (1.2 kg/m³), with the barometric pressure at sea level of 29.92 inches of mercury (101.325 kPa) and a temperature of 70 °F (21 °C). Selecting a centrifugal fan to operate at conditions other than standard air requires adjustment to both static pressure and power.

When a centrifugal fan is specified for a given CFM and static pressure at conditions other than standard, an air density correction factor must be applied to select the proper size fan to meet the new condition. Since 200 °F (93 °C) air weighs only 80% of 70 °F (21 °C) air, the centrifugal fan will create less pressure and require less power. To get the actual pressure required at 200 °F (93 °C), the designer would have to multiply the pressure at standard conditions by an air density correction factor of 1.25 (i.e., 1.0/0.8) to get the system to operate correctly. To get the actual power at 200 °F (93 °C), the designer would have to divide the power at standard conditions by the air density correction factor.

AMCA Standard 210 defines uniform methods for conducting laboratory tests on housed fans to determine airflow rate, pressure, power and efficiency, at a given speed of rotation. The purpose of AMCA Standard 210 is to define exact procedures and conditions of fan testing so that ratings provided by various manufacturers are on the same basis and may be compared. For this reason, fans must be rated in SCFM.