Eugène Viollet-le-Duc
Not to be confused with Violette Leduc.

Eugène Emmanuel Viollet-le-Duc (1814–1879) was a French architect and theorist, famous for his interpretive "restorations" of medieval buildings. Born in Paris, he was a major Gothic Revival architect.

Viollet-le-Duc's father was a civil servant living in Paris who collected books; his mother's Friday salons were attended by Stendhal and Sainte-Beuve. His mother's brother, Étienne-Jean Delécluze, "a painter in the mornings, a scholar in the evenings" (Summerson), was largely in charge of the young man's education. Viollet-le-Duc was trendy philosophically: republican, anti-clerical, rebellious, he built a barricade in the July Revolution of 1830 and refused to enter the École des Beaux-Arts. Instead he opted in favor of direct practical experience in the architectural offices of Jacques-Marie Huvé and Achille-François-René Leclère. 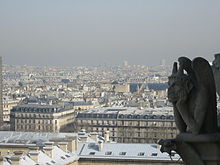 One of the many grotesques on the face of the Notre Dame in Paris added during Viollet-le-Duc's restoration. This one is commonly termed Le Stryge (the strix.)

During the early 1830s, a popular sentiment for the restoration of medieval buildings developed in France. Viollet-le-Duc, returning during 1835 from study in Italy, was commissioned by Prosper Merimée to restore the Romanesque abbey of Vézelay. This work was the first of a long series of restorations; Viollet-le-Duc's restorations at Notre Dame de Paris brought him national attention. His other main works include Mont St-Michel, Carcassonne, Roquetaillade castle and Pierrefonds.

Viollet-le-Duc's "restorations" frequently combined historical fact with creative modification. For example, under his supervision, Notre Dame was not only cleaned and restored but also "updated," gaining its distinctive third tower (a type of flèche) in addition to other smaller changes. Another of his most famous restorations, the medieval fortified town of Carcassonne, was similarly enhanced, gaining atop each of its many wall towers, a set of pointed roofs that are actually more typical of northern France.

At the same time, in the cultural atmosphere of the Second Empire theory necessarily became diluted in practice: Viollet-le-Duc provided a Gothic reliquary for the relic of the Crown of Thorns at Notre-Dame in 1862, and yet Napoleon III also commissioned designs for a luxuriously appointed railway carriage from Viollet-le-Duc, in 14th-century Gothic style (Exhibition 1965).

Among his restorations were:

Restoration of the Château de Pierrefonds, reinterpreted by Viollet-le-Duc for Napoleon III, was interrupted by the departure of the Emperor in 1870.

Basic intervention theories of historic preservation are framed in the dualism of the retention of the status quo versus a "restoration" that creates something that never actually existed in the past. John Ruskin was a strong proponent of the former sense, while his contemporary, Viollet-le-Duc, advocated for the latter instance. Viollet-le-Duc wrote that restoration is a "means to reestablish [a building] to a finished state, which may in fact never have actually existed at any given time."[1] The type of restoration employed by Viollet-le-Duc was decried by John Ruskin as "a destruction out of which no remnants can be gathered: a destruction accompanied with false description of the thing destroyed."[2]

This argument is still a current one when restoration is being considered for a building or landscape. In removing layers of history from a building, information and age value are also removed which can never be recreated. However, adding features to a building, as Viollet-le-Duc also did, can be more appealing to modern viewers.

The fortified city of Carcassonne restored by Viollet-le-Duc 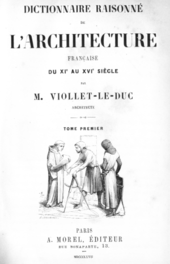 Throughout his career Viollet-le-Duc made notes and drawings, not only for the buildings he was working on, but also on Romanesque, Gothic and Renaissance buildings that were to be soon demolished. His notes were helpful in his published works. His study of medieval and Renaissance periods was not limited to architecture, but extended to furniture, clothing, musical instruments, armament, geology and so forth.

All this work was published, first in serial, and then as full-scale books, as: 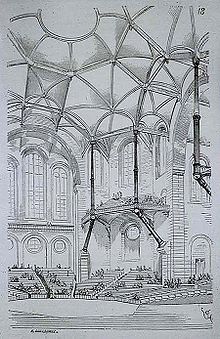 Viollet-le-Duc is considered by many to be the first theorist of modern architecture. Sir John Summerson wrote that "there have been two supremely eminent theorists in the history of European architecture—Leon Battista Alberti and Eugène Viollet-le-Duc."[3]

His architectural theory was largely based on finding the ideal forms for specific materials, and using these forms to create buildings. His writings centered on the idea that materials should be used 'honestly'. He believed that the outward appearance of a building should reflect the rational construction of the building. In Entretiens sur l'architecture, Viollet-le-Duc praised the Greek temple for its rational representation of its construction. For him, "Greek architecture served as a model for the correspondence of structure and appearance."[4] There is speculation that this philosophy was heavily influenced by the writings of John Ruskin, who championed honesty of materials as one of the seven main emphases of architecture.

In several unbuilt projects for new buildings, Viollet-le-Duc applied the lessons he had derived from Gothic architecture, applying its rational structural systems to modern building materials such as cast iron. He also examined organic structures, such as leaves and animal skeletons, for inspiration. He was especially interested in the wings of bats, an influence represented by his Assembly Hall project.

Viollet-le-Duc’s drawings of iron trusswork were innovative for the time. Many of his designs emphasizing iron would later influence the Art Nouveau style, most noticeably in the work of Hector Guimard. His writings inspired some American architects, including Frank Furness, John Wellborn Root, Louis Sullivan, and Frank Lloyd Wright.[5]

Viollet-le-Duc had a second career in the military, primarily in the defence of Paris during the Franco-Prussian War (1870-1). He was so influenced by the conflict that during his later years he described the idealized defense of France by the analogy of the military history of Le Roche-Pont, an imaginary castle, in his work Histoire d'une Forteresse (Annals of a Fortress, twice translated into English). Accessible and well researched, it is partly fictional.

Annals of a Fortress strongly influenced French military defensive thinking. Viollet-le-Duc's critique of the effect of artillery (applying his practical knowledge from the 1870-1871 war) is so complete that it accurately describes the principles applied to the defence of France until World War II. The physical results of his theories are present in the fortification of Verdun prior to World War I and the Maginot Line prior to WWII. His theories are also represented by the French military theory of "Deliberate Advance", such that artillery and a strong system of fortresses in the rear of an army are essential. 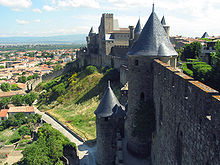 Some of his restorations, such as that of the Château de Pierrefonds, have become very controversial because they were not intended so much to recreate a historical situation accurately as to create a "perfect building" of medieval style: "to restore an edifice", he observed in the Dictionnaire raisonné, "is not to maintain it, repair or rebuild it, but to re-establish it in a complete state that may never have existed at a particular moment".[6] The idea and the very word restoration applied to architecture Viollet-le-Duc considered part of a modern innovation. Modern conservation practice considers Viollet-le-Duc's restorations too free, too personal, too interpretive, but some of the monuments he restored might have been lost otherwise.

The English architect Benjamin Bucknall (1833–95) was a devotee of Viollet-le-Duc and during 1874-81 translated several of his publications into English to popularise his principles in Great Britain.

In his old age, Viollet-le-Duc relocated to Lausanne, Switzerland, where he constructed a villa (since destroyed). He died there in 1879.