You Shook Me All Night Long

You Shook Me All Night Long

Infobox Single
Name = You Shook Me All Night Long 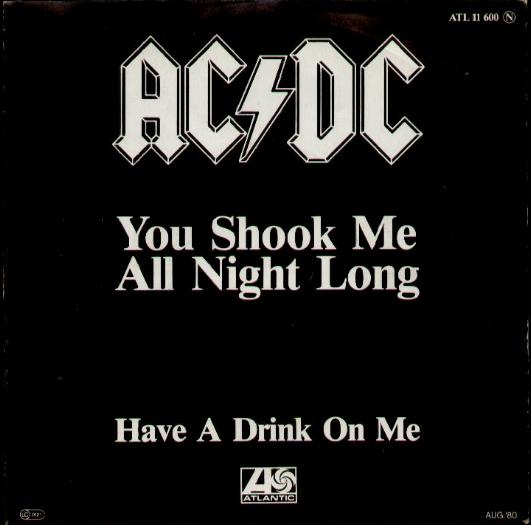 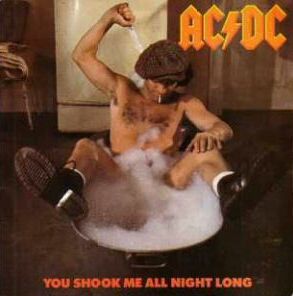 |Infobox Song
Name = You Shook Me All Night Long

"You Shook Me All Night Long" is one of 's signature songs from their most successful album, "". The song also reappeared on their later album "". It is one of the band's top 40 singles, reaching number 35 in the North American pop singles chart in 1980. The single was re-released internationally in 1986 following the release of the album "Who Made Who".

"You Shook Me All Night Long" placed at No. 10 on VH1's list of "The 100 Greatest Songs of the 80s". In the song, the lead singer relates the story of a night with a beautiful woman.

There are two versions to the music video. The first version, directed by Eric Dionysius and Eric Mistler [ [http://www.mvdbase.com/video.php?id=593 mvdbase.com - AC/DC - "You shook me (all night long) [version 1: 1980" ] ] , is similar to the other "Back in Black" videos ("Back in Black", "Hells Bells", "What Do You Do for Your Money Honey", "Rock and Roll Ain't Noise Pollution", and "Let Me Put My Love Into You") and is only available on the special "Back in Black, The Videos" which could be obtained by purchasing a recent "Back in Black" album. In the second version, directed by David Mallet [ [http://www.mvdbase.com/video.php?id=611 mvdbase.com - AC/DC - "You shook me (all night long) [version 2: 1986" ] ] and released six years after the song's original release, Angus and follow Brian around, with Angus in his signature schoolboy outfit. "You Shook Me All Night Long" was also the second song to be played by AC/DC on in 2000, following their performance of "."

There are at least two live versions of this song that have been officially released. One of them is on the band's album "Live", the other is on the soundtrack to the movie "."

"You Shook Me All Night Long" is perhaps one of the most controversial film clips AC/DC ever released. The film casts Corinne Russell, a former Hill's Angel and Page 3 Girl, along with other leather clad women with zippers at the groin region of their suits; however, a softer, censored alternative version exists without these shots.

In 2008, the song was acclaimed as the most requested song at wedding receptions [http://www.discjockeys.com/top_200.php] , with 's in second, and by the in third.

*2000 - Kid Rock and Phish covered the song in Las Vegas
*2001 - covered this song on the "" album
*2002 - Céline Dion and covered this song on "" Las Vegas concert. Although it wasn't released as a single, some radios started playing the track. It reached #16 on the Hungarian Radio chart, #22 on the Belgium Wallonie Airplay chart, #122 on the Belgium Flanders Airplay chart and #3 on VH1's Least Metal Moments. [http://www.vh1.com/shows/dyn/the_greatest/86677/episode_featured_copy.jhtml] It was also voted the world's worst cover version, in a poll of music experts in "" magazine. [ [http://news.bbc.co.uk/1/hi/entertainment/7468837.stm BBC NEWS | Entertainment | Dion sang 'worst ever cover song' ] ]
*2004 - (Mutt Lange's wife) also covered the song on her "" concert special DVD.
* has covered the song in live performance.
*The Christian parody band re-wrote the lyrics to be about , and re-titled the song "You Booked Me".
* covered this song live.
* recorded a -sounding cover of the song for their 2007 album "". Their version entered the "Billboard" chart at #59 as an album cut.
* covered this song twice during her European Hazel Eyes tour 2006, the song was played and known amongst fans as her staple intro before she came on stage during her Breakaway Tour 2004-2005, Hazel Eyes Tour US 2005, Hazel Eyes European Tour 2006 and Addicted Tour US in Summer 2006.
* sang the song as a duet with as part of the encore for his Somewhere in the Sun Tour 2005.
* did a metal cover on their Japanese release of "".
*2006 - did a of this song and "" by , along with favela style rap.