Object Linking and Embedding (OLE) is a technology developed by Microsoft that allows embedding and linking to documents and other objects. For developers, it brought OLE Control eXtension (OCX), a way to develop and use custom user interface elements. On a technical level, an OLE object is any object that implements the IOleObject interface, possibly along with a wide range of other interfaces, depending on the object's needs.

OLE allows an editing application to export part of a document to another editing application and then import it with additional content. For example, a desktop publishing system might send some text to a word processor or a picture to a bitmap editor using OLE. The main benefit of OLE is to add different kinds of data to a document from different applications, like a text editor and an image editor. This creates a compound document and a master file to which the document references. Changes to data in the master file immediately effects the document that references it. This is called "linking" (instead of "embedding").

Its primary use is for managing compound documents, but it is also used for transferring data between different applications using drag and drop and clipboard operations. The concept of "embedding" is central to the inclusion of multimedia in Web pages, such as video, animation (including Flash animations), and audio files within the hypertext markup language (such as HTML or XHTML) or other structural markup language used (such as XML or SGML). Modern browsers may use different embedding mechanisms than OLE.

OLE 1.0, released in 1990, was the evolution of the original dynamic data exchange, or DDE, concepts that Microsoft developed for earlier versions of Windows. While DDE was limited to transferring limited amounts of data between two running applications, OLE was capable of maintaining active links between two documents or even embedding one type of document within another.

OLE 1.0 later evolved to become an architecture for software components known as the Component Object Model (COM), and later DCOM.

When an OLE object is placed on the clipboard or embedded in a document, both a visual representation in native Windows formats (such as a bitmap or metafile) is stored, as well as the underlying data in its own format. This allows applications to display the object without loading the application used to create the object, while also allowing the object to be edited, if the appropriate application is installed.

The Object Packager, a component of OLE, shipping from Windows 3.1 up to Windows XP allows a non-OLE object to be "packaged" so it can be embedded into an OLE client.

OLE 2.0 was the next evolution of OLE, sharing many of the same goals as version 1.0, but was re-implemented on top of the Component Object Model (COM) instead of using VTBLs directly. New features were OLE automation, drag-and-drop, in-place activation and structured storage. Monikers evolved from OLE 1 object names, and provided an hierarchical object and resource naming system similar to URLs or URIs, which were independently invented. Windows now has merged the two technologies supporting a URL Moniker type, and a Moniker URL scheme. Today Microsoft's Internet Explorer uses the operating system's URL Monikers internally to download resources. Applications which do so can share IE's cache. However most (if not all) competing browsers have a completely independent implementation of Web protocols, including their own cache, and do not use the Moniker system. 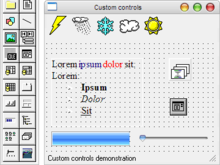 OLE custom controls were introduced in 1994 as a replacement for the now deprecated Visual Basic Extension controls. Instead of upgrading these, the new architecture was based on OLE. In particular, any container that supported OLE 2.0 could already embed OLE custom controls, although these controls cannot react to events unless the container supports this. OLE custom controls are usually shipped in the form of a dynamic link library with the .ocx extension. In 1996 all interfaces for controls (except IUnknown) were made optional to keep the file size of controls down, so they would download faster; these were then called ActiveX Controls.

To ease understanding of what follows, a bit of terminology has to be explained. The view status of an object is whether the object is transparent, opaque, or opaque with a solid background, and whether it supports drawing with a specified aspect. The site of an object is an object representing the location of the object in its container. A container supports a site object for every object contained.

What follows is a list of interfaces, grouped by the object that usually needs to implement them. Interfaces usually implemented by the OLE object are usually called on by the OLE container, and vice-versa. Note that in the following list indentation indicates interface inheritance. All non-indented interfaces derive from IUnknown.

DataObject
When implemented, enables the transfer of data, and notification of data changes. It must be implemented by objects that are to support drag-and-drop, being copied to or pasted from the clipboard, or being linked or embedded in a containing document.
ObjectWithSite
Allows the caller to inform the OLE object of its site. This functionality is also provided by OleObject, but ObjectWithSite can be used, when supported, if OleObject is not used for other matters.
OleCache
Allows visual presentations from a DataObject to be cached. This allows an embedded object to store its visual representation, thus enabling it to be displayed later without needing to start the application that was used to create the object.
Usually the stock implementation is used.

OleCacheControl
This interface is not called by the container, but internally by the object to allow it to receive notifications of when its DataObject is running, thereby allowing it to subscribe to notifications of data changes of that object and thus allowing it to update the cached presentation properly.
Usually the stock implementation is used.
OleDocument
Allows the OLE object to support multiple views of its data, as well as a few related functions.
OleDocumentView
A document object (an object that implements OleDocument) implements this interface for every view. It allows the caller to set the site of the object, query and set the size of the object and to show and activate it, as well as some related functions.
OleWindow

IOleInPlaceObjectWindowless
A windowless object is an object that doesn't have its own window but it instead displayed in its container's window. It is used by the container to relay messages received by the container's window that are intended for the contained object. For example, if the mouse is moved over a window, Windows places a mouse move message along with the mouse coordinates in the message queue of the window. If this window contains windowless embedded objects, the message may have to be relayed to such an object if the coordinates of the mouse-pointer are over this object. For similar reasons this interface also provides access to the object's DropTarget interface.

OleLink
Allows the object to support linking, e.g. by allowing the container to set the source of a linked object.
Usually the stock implementation is used.
OleObject
Arguably the most important interface for an OLE object. For example, it allows the container to inform the object of its site, initialize the object from data, to open and close it, to query and set the size of the object, to ask for notifications on the container's AdviseSink and to execute objects defined as "verbs" on the object. These verbs often include "Open" or "Edit", but can also include other verbs. One of the verbs is defined to be the principal verb, and it is executed when the user double-clicks an object.
ViewObject
Allows an object to draw itself directly, without passing a DataObject to the container. For objects that support both DataObject and this interface, the underlying implementation is usually shared.

ViewObject2
Additionally allows the caller to query the size of the object.

ViewObjectEx
Adds support for flicker-free drawing of transparent objects, hit-testing for objects with irregular shapes and setting the size of an object.

IAdviseSink
Allows the implementer to receive notifications when the object is saved, closed, renamed, or when its data or visual presentation changes.

IOleInPlaceUIWindow
Enables embedded objects to negotiate space for toolbars on the container's window.

IOleInPlaceSite
If a container implements this interface, it allows embedded objects to be activated in place, i.e. without opening in a separate window. It provides access to the container's IOleInPlaceUIWindow.

IOleInPlaceSiteEx
If a container implements this interface, it allows embedded objects to check whether they need to redraw on activation or deactivation. It also allows them to request their UI to activate.

IOleUILinkContainer
Contains the methods that the standard OLE dialog boxes that manage linked objects use to update linked objects in a container, or to query and change their sources. Used by the "Links", "Change source", "Update links" and "Object properties" dialog boxes.

IOleUILinkInfo
Additionally allows the dialog boxes to query when linked objects were last updated, and whether this was done automatically or manually.
IOleUIObjInfo
Contains the methods needed by the "Object properties" dialog box. For example if the user opens the "Object properties" dialog box and asks for the object to be converted to another type, a method on this interface is called.

IOleUndoManager
Provides a centralized undo service to both the container itself and to embedded objects. When an undoable action is performed, an IOleUndoUnit is created and added to the IOleUndoManager.

IOleParentUndoUnit
Allows an undo unit to contain other undo units. In essence this allows the undo unit to act as an undo stack, grouping undo units together. For example, if a macro is run, all undo-able actions performed by the macro may be grouped together in one undo unit.

IOleWindow
This interface represents a window of a container or contained object. It allows callers to obtain the handle of the window, and to toggle the context-sensitive help function. When the context-sensitive help function is turned on, typically the mouse-pointer changes to an arrow with a question mark to indicate that clicking a user interface element will result in opening a help window.

There was a technology, called OpenDoc, which tried to compete with OLE. It was considered by interested companies (competitors of Microsoft) to be both easier to use and more robust than OLE. However, OpenDoc does have some known problems. OpenDoc allowed users to view and edit information across applications, directly in competition with Microsoft's proprietary OLE standard. This "features" came at a cost. A consortium called the Component Integration Laboratories ("CIL") was established in 1993 by some Microsoft competitors to create OpenDoc as an "open-source" standard for cross-platform linking and embedding.[1][2]

Microsoft unilaterally announced that its OLE proprietary technology would be incorporated directly into MS Windows operating system. Microsoft then required OLE compatibility as a condition of Microsoft's certification of an application's compatibility with Windows 95.

Use of Microsoft Object Linking and Embedding (OLE) objects limits the interoperability, because these objects are not widely supported in programs for viewing or editing files (e.g. embedding of other files inside the file, such as tables or charts from a spreadsheet application in a text document or presentation file).[3][4][5][6][7] If software that understands an OLE object is not available, the object is usually replaced by a picture (bitmap representation of the object) or not displayed at all.[8][9][10]