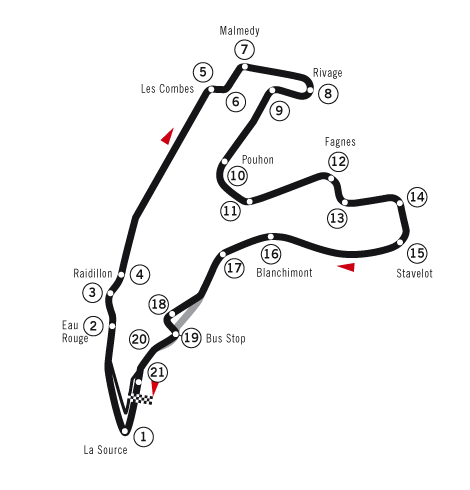 Fast_Country = Germany
First_Driver =
First_Team = Jordan-
First_Country = UK
Second_Driver =
Second_Team = Jordan-
Second_Country= Germany
Third_Driver =
Third_Team = -
Third_Country = FranceThe 1998 Belgian Grand Prix was a race held at Spa-Francorchamps on . It was run in extremely wet weather and was notable for a multiple collision on the first lap involving at least 13 cars. It also featured a controversial collision between race leader and , who was being lapped at the time. The race resulted in the first ever Grand Prix victory for the Jordan team thanks to . Hill's Jordan teammate, , came second, making it a 1-2 for the Irish team.

The practice and qualifying sessions saw two spectacular accidents at Eau Rouge involving the Williams of and the of . Both walked away although Salo in particular was lucky to escape with just a headache. The McLarens set the pace in qualifying with and Coulthard over a second clear of the rest of the field, with in third, his highest grid position of the season.

Race day was very wet and Michael Schumacher was fastest in the morning warm-up session. Despite the heavy rain it was decided that the race would start at the scheduled time without a safety car, unlike the previous season's race. At the start Häkkinen led from a fast-starting Villeneuve, Michael Schumacher and . Behind them, Coulthard suddenly emerged from the opaque spray at right angles to the racing line and hit the trackside wall, after reportedly making contact with . The McLaren rebounded directly into the path of the oncoming field, causing a chain reaction. Some drivers including the Jordans of Hill and managed to get through unscathed either by luck (Hill, who was just a few meters ahead of the carnage) or by staying behind the melee (Ralf), others weren't quite so fortunate. Along with Coulthard the casualties were Irvine (Ferrari), (Benetton), (Stewart), (), (Prost), (Prost), (), (Arrows), (Tyrrell), (Tyrrell) and (). managed to get his Stewart back to the pits but it was too badly damaged to continue.

The race was quickly stopped while the track was cleared. Both Irvine and Barrichello sustained minor injuries, and while Irvine restarted, Barrichello did not. In total four teams had both of their cars involved, and as all four only had one spare car available each, this meant Salo, Rosset, and Panis could not restart—their higher priority team-mates receiving the team's spare car.

The race was restarted nearly an hour later and saw Hill make an excellent start to take the lead for the first time since the . There was drama again as Häkkinen and Michael Schumacher went for the same piece of tarmac at the first corner, causing the Finn to spin and be hit by Herbert's Sauber, putting both cars out. It was not clear from video evidence whether Schumacher and Häkkinen had made contact. Halfway round the first lap, Coulthard and Wurz collided ending the Austrian's afternoon while Coulthard rejoined at the back of the pack. The safety car was deployed while Häkkinen's car was removed. Hill led Michael Schumacher until the eighth lap when the German overtook his old rival at the Bus Stop. Irvine then lost his front wing in an off-track excursion, dropping him down the order.

As the race intensified, Villeneuve spun out having briefly taken the lead during the first round of pitstops. Michael Schumacher retained his lead and was nearly 40 seconds ahead of Hill when he came up to lap Coulthard. had already paid a visit to the McLaren pitwall to ensure that Coulthard would move over. Coulthard did not let Schumacher by immediately, causing the Ferrari driver to shake his fist at the Scot. As the cars came down the hill towards Pouhon, Coulthard attempted to let Schumacher through, by lifting off to reduce his speed. Crucially however he had not moved off the racing line and in very poor visibility Schumacher slammed straight into the back of the McLaren, tearing off the right-front wheel of the Ferrari and removing the rear wing of the McLaren. Both cars made it back to the pits, and Schumacher immediately made his way to the McLaren garage where he screamed abuse at Coulthard, convinced that Coulthard was at fault. Schumacher even went as far as saying that Coulthard had tried to kill him. He then went to the steward's office to protest. Although the stewards found no case against Coulthard, the Scot admitted in 2003 that he was at least partly at fault for the incident, stating, "I lifted to let him pass me, but I lifted in heavy spray on the racing line. You should never do that. I would never do that now." [ [http://www.smh.com.au/articles/2003/07/06/1057430084085.html] ] Schumacher was also criticised for his part in the incident at the time, with the race stewards requesting an explanation for why the German had driven into Coulthard's spray in the first place after Coulthard had moved aside to let him through.

While this controversial incident unfolded Hill had taken the lead and Irvine had spun out of the race, ending Ferrari's interest in the race. The drama was far from over as Fisichella's Benetton ploughed into the back of Nakano's Minardi in an almost identical accident. The Benetton hit the end of the pitwall and caught fire, which was quickly extinguished. The safety car was deployed and Hill immediately made his second pitstop to take advantage, retaining his lead.

The final stages of the race saw only six cars remaining although both Coulthard and Nakano rejoined after lengthly repairs to their cars. Hill led team mate with close behind in third. It was then just a matter of counting down the laps to the finish for the Jordan team and it was Hill who took his 22nd and final Grand Prix victory, handing Jordan their first ever Grand Prix victory in the process at the circuit where they gained their first pole position in 1994 and finished second in 1997. On the podium however Ralf was looking less than happy, clearly feeling he could have won the race himself. It later emerged that had been issued preventing Ralf from overtaking Damon, which was illustrated in a TV documentary about the Jordan team, and Eddie Jordan's autobiography "An Independent Man". [ [http://www.itv-f1.com/Feature.aspx?Type=General&PO_ID=39312 The day EJ beat them all] ITV F1]

*Last win:
*Race Leaders: Damon Hill (Lap 1-9 & 26-44); Michael Schumacher (Lap 10-25) ["Foster's Grand Prix de Belgique" [http://www.gpracing.net192.com/races/qualify/627.cfm GPRacing.net192.com] . Retrieved 19 July 2006]
*At the end of the weekend there were 23 wrecked cars.
*Following the race, the main talking point was 's abusive behaviour towards , following their collision in the race. After parking his Ferrari, Schumacher stormed off to McLaren's garage where he proceeded to shout abusive language at the Scot.