of a group G. It was introduced by Issai Schur (1904) in his work on projective representations.

The Schur multiplier M(G) of a finite group G is a finite abelian group whose exponent divides the order of G. If a Sylow p-subgroup of G is cyclic for some p, then order of M(G) is not divisible by p. In particular, if all Sylow p-subgroups of G are cyclic, then M(G) is trivial. 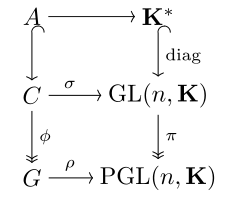 The study of such covering groups led naturally to the study of central and stem extensions.

A central extension of a group G is an extension

A stem extension of a group G is an extension

where K ≤ Z(C) ∩ C′ is a subgroup of the intersection of the center of C and the derived subgroup of C; this is more restrictive than central.

If the group G is finite and one considers only stem extensions, then there is a largest size for such a group C, and for every C of that size the subgroup K is isomorphic to the Schur multiplier of G. If the finite group G is moreover perfect, then C is unique up to isomorphism and is itself perfect. Such C are often called universal perfect central extensions of G, or covering group (as it is a discrete analog of the universal covering space in topology). If the finite group G is not perfect, then its Schur covering groups (all such C of maximal order) are only isoclinic.

Stem extensions have the nice property that any lift of a generating set of G is a generating set of C. If the group G is presented in terms of a free group F on a set of generators, and a normal subgroup R generated by a set of relations on the generators, so that G ≅ F/R, then the covering group itself can be presented in terms of F but with a smaller normal subgroup S, C ≅ F/S. Since the relations of G specify elements of K when considered as part of C, one must have S ≤ [F,R].

In fact if G is perfect, this is all that is needed: C ≅ [F,F]/[F,R] and M(G) ≅ K ≅ R/[F,R]. Because of this simplicity, expositions such as (Aschbacher 2000, §33) handle the perfect case first. The general case for the Schur multiplier is similar but ensures the extension is a stem extension by restricting to the derived subgroup of F: M(G) ≅ (R ∩ [F, F])/[F, R]. These are all slightly later results of Schur, who also gave a number of useful criteria for calculating them more explicitly.

A fairly recent topic of research is to find efficient presentations for all finite simple groups with trivial Schur multipliers. Such presentations are in some sense nice because they are usually short, but they are difficult to find and to work with because they are ill-suited to standard methods such as coset enumeration.

In topology, groups can often be described as finitely presented groups and a fundamental question is to calculate their integral homology

. In particular, the second homology plays a special role and this led Hopf to find an effective method for calculating it. The method in (Hopf 1942) is also known as Hopf's integral homology formula and is identical to Schur's formula for the Schur multiplier of a finite, finitely presented group:

and F is a free group. The same formula also holds when G is a perfect group.[1]

The recognition that these formulas were the same led Eilenberg and Mac Lane to the creation of cohomology of groups. In general,

where the star denotes the algebraic dual group, and when G is finite, there is an unnatural isomorphism

of the group E(R) of (infinite) elementary matrices with entries in R.[2]