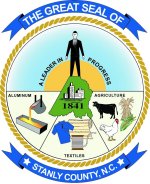 Stanly County is a member of the regional .