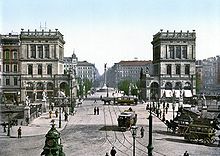 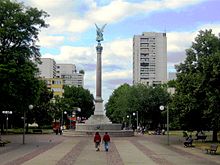 Mehringplatz is a round plaza (or circus)[1] at the southern peak of the Friedrichstadt neighbourhood in Kreuzberg, Berlin. It marks the southern end of Friedrichstraße. Since 1947 it is named after the publicist Franz Mehring (1846–1919). 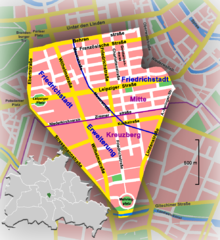 Mehringplatz is one of three prominent squares laid out about 1730 in the course of the city's Baroque extension under King Frederick William I of Prussia, beside Pariser Platz (former Karree) and Leipziger Platz (Octogon). Due to its circular shape Mehringplatz was initially named Rondell; in 1815, it was renamed Belle-Alliance-Platz after the Battle of La Belle Alliance, an alternative name for the Battle of Waterloo that was then popular in Prussia. The square was the southern entrance to Berlin via Hallesches Tor, a gate of the new city walls on the road from Halle.

The place was refurbished from the 1830s on including the erection of the Friedenssäule ("Peace Column") with a statue of Victoria by Christian Daniel Rauch in 1843. In World War II the area was completely devastated by an air raid on 3 February 1945 and the following Battle of Berlin. From the 1960s the Mehringplatz was redeveloped as a pedestrian zone in the centre of a large subsidized housing estate according to conceptions by Hans Scharoun ultimately executed by Berlin architect Werner Düttmann. A series of striking murals were created in the 1990s decorating the lower walls of the housing in its courtyard.