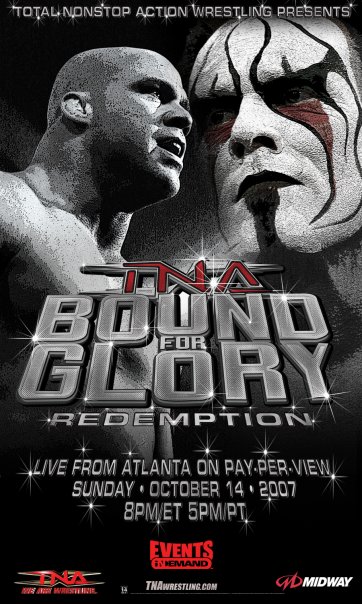 Bound for Glory (2007) was the third annual Bound for Glory event produced by (TNA). It took take place on at the Gwinnett Center in the Atlanta suburb of . The tagline for the event was "Redemption". [cite web|url=http://www.indemand.com/viewProduct.jsp?prodId=70289|title=TNA: Bound For Glory|accessdate=2007-09-19|publisher=iN DEMAND]

The was versus Sting for the , which Sting won by pinfall after executing a Scorpion Death Drop. The most prominant match on the card, was versus Christian Cage, which Joe won by forcing Cage to submit to the Coquina Clutch.

Hemme was never officially eliminated. She was () unable to continue and was removed from the match by EMTs.

Adam "Pacman" Jones, who is also from Atlanta and appeared on the show, personally purchased 1,500 tickets with the intention of donating them to the Fulton County School District to be handed out as rewards for scholastic achievement and good conduct. [cite press release|title=Adam 'Pacman' Jones Buys 1,500 Tickets to TNA Wrestling Event for Atlanta Students|publisher=|date=2007-10-03|url= http://biz.yahoo.com/prnews/071003/clw037.html?.v=101|accessdate=2007-10-03]