Derbyshire Building Society (previously trading as The Derbyshire) is a former UK building society based in Duffield, Derbyshire in the East Midlands of England. With effect from 1 December 2008 it was acquired by Nationwide Building Society (Nationwide) and now operates as a trading division of Nationwide. Prior to the merger with Nationwide it was the 9th largest building society in the United Kingdom based on total assets of £7.1 billion at 31 December 2007.[2] It operates 50 branches.[3]

In 2007 the society was rebranded with a new logo containing the Peak District Millstone, and a change of the trading name from “The Derbyshire” to the legal name of “Derbyshire Building Society.” The new identity incorporated new signage for all branches and replacement passbooks and cashcards for members.

In December 2008 with the completion of the merger with Nationwide, the society's logo was again changed, this time removing the Peak District Millstone image.[5] 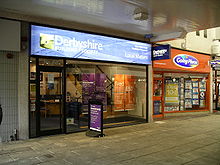 The branch in Coventry
(signage before Nationwide merger)

The merger was borne out of increasing fears about the financial security of both the Derbyshire and the Cheshire societies with the former expected to post half-yearly losses of £17 million and the latter posting losses of £10.5 million.[6] As a result of these projected losses no windfall payments were made to the savers of the smaller societies[6] Unusually there was no vote amongst members as to this proposition, after a special resolution under the Building Societies Act enabling a faster merger.[7]

The deal was concluded on 1 December 2008 following agreement by the Financial Services Authority and the Office of Fair Trading. The Nationwide will initially keep the separate identities of the two societies.