Coley is a Canadian indie rock band, from Sherbrooke, Quebec. The band is the brainchild of singer/guitarist JF Coley, joined by Jocelyn Blanchette on the drums and David Jalbert on bass. Their musical style has been referred to as a "post-grunge throwback to British 60's pop". Their latest album, Crossing the Rubicon, discusses political and social issues facing the Eastern Townships of Quebec and its community. 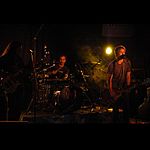 Coming from a musical family, JF started performing at age 3, in a violin ensemble. After graduating from Mount Allison University (where JF was in a band, Smiling Politely, composed of future members of In-Flight Safety) JF was recruited by Sarnia, Ontario band Flicker.

Over the next year, JF would perform with some of Canada's top bands, like Our Lady Peace, Nickelback, The Guess Who, Treble Charger, etc... After Canadian Music Week 2003, JF returned to the Eastern Townships where he would now base his operations. Aware that the Quebec sovereignty movement had negatively affected the Eastern Townships (where the culture had always celebrated a happy coexistence between Francophones and anglophones), JF started working with CJMQ-FM to promote the local culture and celebrate a unique region of North America.

In late 2003, JF went to Los Angeles to record his first album, Extended Play, with producer Mike Krompass. The album was a small collection of songs, and was released under JF Coley.

A band was put together to tour the album, composed of Jocelyn Blanchette on drums and Sebastien Simard on bass. The band performed around the Eastern Townships and Ontario with such bands as April Wine and the Trews.

The album had a limited release in the summer of 2006, and the band toured Quebec and Ontario over two weeks with August and Wellabee. The band lost their bass player to work, which slowed down the touring. They still managed a show for the Terry Fox Marathon of Hope, and two shows in the US in Boston and New York City.

The album has been spun across Canada, on campus radio stations and independent commercial stations.

In the spring of 2007 the band added David Jalbert as a new bass player and are now ready to hit the road again in the summer.[1]

Coley during a photo shoot break in the Eastern Townships, 2006