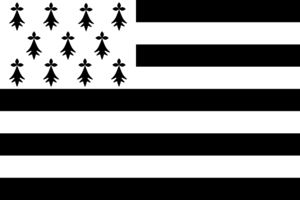 Proportion = 2:3
Adoption = 1923
Use = 100100
Design = Nine horizontal stripes alternating black and white with an ermine cantonThe flag of Brittany is called the "Gwenn-ha-du," which means "white and black" in Breton. It is also unofficially used in the "" of , although this belongs to the "région" not the "région" , because the territory of Loire-Atlantique is historically part of the province of . (Naoned), its "", was once one of the two capital cities of Brittany.

The flag's dimensions are not fixed, and may vary from 9:14 cm to 8:12 m. The flag is not only used by cultural associations or autonomists but by everyone in general. For years, the authorities considered the flag as a separatist symbol, but the attitude has now changed and the flag, no longer having any political connotations, can appear everywhere, even on public buildings along with the other official flags. It is widely used throughout Brittany and can even be seen on town halls in the region. Because of the absence of legislation concerning regional flags in the flag is also flown on sail and fishing boats. The design of the ermine spots can vary but the version most frequently seen is shown above.

The flag was created in 1923 by (1900-1963, a member of various political and cultural organizations). He used as his inspiration the flags of the United States and Greece as these two countries were seen at that time as the respective symbols of liberty and democracy.

The flag first came to notice by a wider public at the in Paris in 1925. It was adopted by various cultural and nationalist groups through the 1920s and 1930s. However, its association with nationalist and separatist groups during the Second World War brought suspicions of collaboration on the flag. A revival of interest in the flag took place in the 1960s, since when it has lost an association with separatism in the mind of the public and become a widely accepted symbol for all Brittany and Bretons. The older ermine field flag and black cross continue to be used, though, by some individuals and groups.

In s, the flag is "Sable, four bars Argent; the canton ermine". Traditionally, coats of arms could be displayed as a rectangular banner, as well as on a shield.

* [http://banniel.geobreizh.com/www/banniel/en-drapeaux-gwennhadu.asp "Bannieloù Breizh", the vexillological and heraldical association of Brittany] (in English)
* [http://gwennhadu.geobreizh.com Gwenn ha du, a website to discover the Breton flag story] (in French)