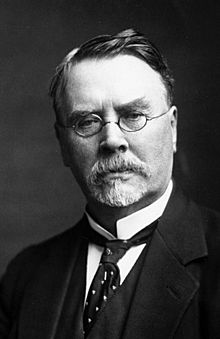 Murdoch Cameron (March 31, 1847 – April 28, 1930) was Regius Professor of Midwifery at the University of Glasgow from 1894 to 1926. He was a pioneer of the Caesarean section under modern antiseptic conditions, becoming world famous after the success of his first Caesarean section at Glasgow Royal Maternity Hospital in 1888. He was honorary President of the first international Congress on Obstetrics and Gynaecology, held in Brussels, in 1892. He was also a founding father of the new Glasgow Royal Maternity Hospital (the Rotten Row) and the father of Samuel James Cameron, Reguis Professor of Midwifery at Glasgow in the 1930s.

Murdoch Cameron was born in Glasgow in 1847 the son of a successful timber merchant, Samuel Cameron (June 25, 1811– January 27, 1886), who originated from the Gaelic-speaking farming communities on the Isle of Mull, Argyllshire, and his wife Mary Clow, daughter of William Clow of Drymen, Stirlingshire. He studied medicine at the University of Glasgow qualifying as MB in 1870, and MD in 1872.

Specialising in obstetrics at his practice in the Townhead district of Glasgow, Cameron was almost immediately appointed Physician to the Glasgow Lying-in Hospital after his graduation. He retained this post until becoming Physician Accoucher to Glasgow's Western Infirmary in 1878. From about 1884 he acted as Professorial Assistant to William Leishman, Professor of Midwifery at Glasgow. And in 1888 he was appointed Obstetric Physician to the Glasgow Royal Maternity Hospital. He also acted as lecturer on gynaecology at Glasgow Queen Margaret’s College and was a leading fundraiser for the campaign to erect a new Glasgow Royal Maternity Hospital on the Rottenrow site in 1880-1. 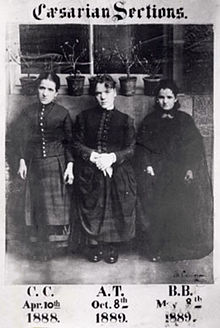 In an improvised operating theatre crowded with doctors and undergraduates on the top floor of the Glasgow Royal Maternity Hospital on April 10, 1888, Murdoch Cameron carried out the first Caesarean section under modern antiseptic conditions. The patient, Catherine Colquhoun, was a rachitic dwarf incapable of natural birth. Cameron, who as an undergraduate had worked as a surgical dresser to the pioneer of antiseptic surgery Joseph Lister at Glasgow Royal Infirmary, helped transform the Caesarean section, under antiseptic conditions, from a dreaded and little used procedure, that usually ended with the death of the mother, into the routine and safe operation it has become.

In recognition of his pioneering work Cameron was appointed honorary President of the first international Congress on Obstetrics and Gynaecology, held in Brussels, in 1892. In 1894, on the recommendation of the Secretary of State for Scotland, Sir George Trevelyan, Murdoch Cameron succeeded Leishman to the position of Professor of Midwifery at the University of Glasgow.

It was an appointment that created furious controversy in some quarters. In an anonymous letter to The Times, London, on January 8, 1894, one correspondent condemned Murdoch Cameron’s election as ‘a heavy blow to the prestige and prosperity of Scotch Universities’ [1]. Dr Cameron’s only claim to the position, the correspondent wrote, was that he ‘is an ardent Gladstonian partisan’ [1].

Nevertheless, Cameron held the position of Professor of Midwifery for thirty-two years, and was awarded an honorary LLD for ‘a long period of faithful, useful and distinguished service’ [2] by the University of Glasgow at his retirement. During four decades of academic teaching, Cameron taught four of his successors to the Chair of Midwifery: John Martin Munro Kerr, Samuel James Cameron, James Hendry and Robert Aim Lennie. Murdoch Cameron died in Glasgow in 1930.

In a famous incident on February 23, 1900, a large crowd of students at the University of Glasgow surrounded the German lecturer, Professor Alexander Tille. The students berated Professor Tille, first English translator of Nietzsche’s Thus Spoke Zarathustra, for an article in Die Woche in which he condemned British conduct in the Boer War. As the students attempted to strip the unapologetic Tille of his professorial gown, he sought refuge in Murdoch Cameron’s lecture room. Cameron, acting as mediator between the students and Tille, arranged a meeting between both sides. At the conclusion of which Professor Cameron, asking the students to ‘forgive and forget’ [3], shook hands with Tille on their behalf.

Murdoch Cameron married Agnes Wallace at Kilsyth, Stirlingshire in 1873. He was the father of S.J. Cameron, successor to the Reguis chair of Midwifery at Glasgow in the 1930s. Murdoch Cameron’s fourth child, Agnes Wallace Cameron, was among the first generation of female medical graduates from a Scottish University. Graduating MB from Glasgow in 1904, Dr A. W. Cameron was later a paediatric specialist to Glasgow Parish Council. Cameron’s eldest daughter, Jean Wallace Cameron, was Matron of the Stirling Maternity Hospital in the 1920s and ‘30s. While his second daughter, Mary Clow Cameron, was lecturer in French at the University of Glasgow, who with her husband, Leon Maurice Pitoy, Chevalier Légion d’honneur, also lecturer in French at Glasgow, founded the Pitoy French language prize at the University in 1938.