Clothing fetish or garment fetish is a sexual fetish that revolves around a fixation upon a particular article or type of clothing, a collection of garments that appear as part of a fashion or uniform, or a person dressed in such a garment.

The clinical definition of a sexual fetish would require that a person be fixated on a specific garment to the extent that it exists as an exclusive (or recurrent) stimulus for sexual gratification.[1][2]

One who exhibits a clothing fetish may be aroused by the sight of a person wearing a particular garment, or by wearing the garment oneself which can be because of the look one achieves by wearing it or the way it feels while it is being worn (and might also get some arousal by seeing somebody in it and imagining how it feels). In later case arousal may originate from the way its fabric feels (see clothing fetish by fabric type) or from the way the garment feels and functions as whole (restrictive clothing being an example).

Others with a clothing fetish may be aroused by the sight of such garments, even without wearing them and in the absence of other person wearing them, and may also derive pleasure from collecting them.

In order to determine the relative prevalences of different fetishes, researchers at the University of Bologna obtained a sample of at least 5000 individuals worldwide from 381 Internet discussion groups. The relative prevalences were estimated based on (a) the number of groups devoted to a particular fetish, (b) the number of individuals participating in the groups and (c) the number of messages exchanged. The top garment fetish was footwear related (high heels) followed by the costumes and the jackets.[3][4]

Though almost any type of garment in theory can be the subject of a fetish, common clothing fetishes include footwear, female underwear and uniforms. A wide range of other garments have been the subject of less common fetishes.

Separate from fetishes as a paraphilia, are garments worn to enhance appearance (tight jeans, other eyecatching clothing); in this case the differentiator is whether for the person concerned, the clothing is the focus of a sexual fetish, or is merely appreciated and found pleasing and enhancing.

Clothing that limits the wearer's movement is commonly used for this property, particularly among bondage enthusiasts and it has common appearance in bondage-related fetish fashion. Such restrictive fashion, among others, includes corsets, hobble skirts and high-heeled footwear (particularly ballet boots in extreme case). Because items it includes are what in modern western society mostly belongs to women's fashion, male restrictive clothing fetishists can have problems in obtaining and using such items without being labeled as transvestites.

The training corset and bondage corset has also become a staple in fetish wear, particularly among dominatrices. A submissive or slave may also be forced to wear a tightly laced corset as a form of punishment or simply restriction. And the masochistic practice known as tightlacing creates a particular type of pleasure for the wearer. In the 1980s, pop music performers such as Madonna and Cyndi Lauper reintroduced and popularized the corset as a daring outerwear garment. This influence continues to the present day in both fetish and mainstream fashion.[5][6]

A hobble skirt is a long, tight skirt, extending below the knees and often ankle length, which is so tight that it is difficult to walk in. When used as fetish clothing, it is often made of latex or PVC and sometimes corseted, to increase the restriction.

Such skirts were briefly a mainstream fashion in the 1910s, however, they were soon abandoned as impractical. They were revived in the 1950s by John Willie and others as a bondage/fetish style.[7]

Stocking fetishists usually find sexual partners clothed in sheer nylon or silk stockings to be sexually stimulating, or find the act of a person donning or removing a pair of stockings arousing. Some men find it arousing to collect and wear stockings, sometimes hidden under a pair of trousers.[8]

Like feet and shoes, sock fetishists often require some specific attraction in the object which may include special colors, shapes, or smells. People with a fetish for socks may have no special attraction to feet or shoes. Some speculate that the strong attraction some men exhibit to the smell of socks worn by women may be an example of the existence of human pheromones – the hypothesis being that the sweat from women's feet may contain chemical attractants that arouse a male subject and that when a male subject is exposed to the smell of womens'feet or footwear at a young age that young man may carry a strong psycho-chemical imprint which motivates his enthusiasm for worn socks or shoes.

Many male sock fetishists are also highly specific regarding the nature of the socks that stimulate them, and this may be coincidental with the type of socks worn by the originator of the female foot odors which first stimulated the psycho-chemical imprint. For example, if a young male subject grows up in a northern climate, and in his period of early pubescent development has a baby sitter who wore the kinds of heavy wool socks that people wear during a northern winter-if that young lady happened to have strong smelling feet and frequently shared close physical proximity to the male subject where he was able to notice the scent of her feet, that young man may develop the aforementioned psycho-chemical imprint and exhibit a fetish for seeing young women wearing heavy wool socks. This belief is supported by observations that the nature of sock fetishism appears to differentiate according to age brackets and periods of clothing trends. Among men who exhibit an interest in women's socks who are currently in their 30s and 40s, and who were therefore in their early pubescent period during the late 80s/early 90s when slouch socks were a popular clothing trend there is a tendency to exhibit a strong interest in very heavy slouchy socks, whereas younger men with a sock fetish tend to show greater interest in the short little ankle-style socks that became popular in later years.

Sneaker fetishism is another specific form of Shoe fetishism and like boot fetishism it can be accompanied by a fetish for the material from which it is made for example the rubber which the outsole and sidewall are made of can be a source of rubber fetishism.

Swimwear fetishism is a sexual fetish relating to swimwear. It can also involve printed or electronic material with swimwear being worn.

The style and cut of jeans can also enhance their sexual appeal to fetishists of either gender. Jeans without pockets on the back are often viewed as showing off one's buttocks and therefore more flattering. Stretch jeans are often viewed as attractive because they have the appearance of being skin tight, while not binding like regular denim jeans would. An extreme example of fetish denim would be "Zip Around Jeans", so called because their zipper unzips starting in the front and continues all the way to the back. Other popular styles include the lace up jean and multi button style jeans.

Fetishism may include various garments typically worn by, and associated with persons of a particular gender. For example, this could be a male attraction to women who are wearing skirts, dresses, or blouses. Certain gender-related elements of clothes could be the source of a fetish, include lace, ruffles, floral print, embroidery, back closures, or various colors (such as mauve and pink).

Among the most common uniforms in uniform fetish are those of a schoolgirl, nurse, French maid, waitress, cheerleader and Playboy Bunny. Some people also regard nuns' habits or even aprons as uniforms. Sometimes, a uniform may be used appropriate to what is being done. For example, someone may wear a nurse's uniform to administer an enema, a police uniform to handcuff and cage someone, or two equals dress as inmates for cell mate on cell mate activities in a prison setting or as submissive to a third (guard) player. This may add a sense of authenticity to the game play.[11] 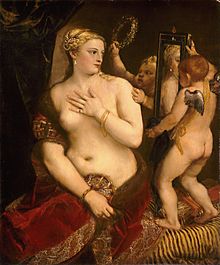 Fur fetishism refers to the sexual fetishism that revolves around people wearing fur, or in certain cases, to the garments themselves.

These materials may be fetishised because the garment acts as a fetishistic surrogate or second skin for the wearer's own skin. The material may be regarded as providing a superstimulus that is more intense than the normal response associated with real skin. This is heightened by the fact that the fur was originally an animal's skin and hair.

The most famous, and one of the earliest depictions of the topic was the semi-autobiographical novel Venus in Furs (1870) by Leopold von Sacher-Masoch. After the novel's success, Sacher-Masoch apparently decided to take on a fetish sadomasochism-lifestyle.[12] In 1884, he had sent a copy of the novel to Richard von Krafft-Ebing, who gave Sacher-Masoch immortality when, in 1891 he used this ancient Austrian nobility name as an eponym for what today is called bottoming.

It can also refer to sexual arousal by means of wearing a fursuit, as seen in the furry fandom.

The feel of tight leather garments worn may be experienced as a form of sexual bondage. Some bondage equipment is made from leather straps. The term "leather culture" was applied in the 1960s in the USA gay sadomasochistic subculture as an umbrella term for alternate sexual practices. The pony fetish involves the use of equestrian like gear fitted to humans. 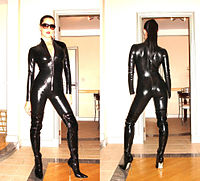 Nylon fetishism includes the wearing of shiny raincoats, jackets and trousers. In the case of heterosexuals, special preferences often include nylon clothing items designed for or belonging to the other sex.

Spandex fetishism is a fetishistic attraction to people wearing stretch fabrics or, in certain cases, to the garments themselves, such as leotards. One reason why spandex and other tight fabrics may be fetishised is that the garment forms a "second skin," acting as a fetishistic surrogate for the wearer's own skin. Wearers of skin-tight nylon and cotton spandex garments can appear naked or coated in a shiny or matte substance like paint. The tightness of the garments may also be seen as sexual bondage. Another reason is that nylon-spandex fabric (preferred by many spandex fetishists) is often produced with a very smooth and silk-like finish, which lends a tactile dimension to the fetish – as well as a visual one. There is a sexual attraction to leotards and other dance related clothing. This also goes for gymnasts too.

In comic books, superheroes, superheroines, and supervillains are generally depicted as wearing costumes made of spandex or a similar material. The superheroines always wear skintight, very flashy and bright-coloured costumes that usually cover only just enough of the body to be presentable. Fantasies involving superheroes or the wearing of superhero costumes are commonly associated with spandex fetishism.

Soft Knitted Fabrics Some fetishists obsess over seeing young women garbed in very soft tactile clothing. The fascination may be particularly strong when a young woman is wearing fabrics which "halo" – meaning they have tiny super-soft fibers that are clearly visible. Such fabrics may include angora, alpaca wool and chenille. A "Soft Knit" fetishist will likely purchase soft clothing for a female partner – including sweaters, hats, scarves, cable-knit tights and socks made from the extra soft fabrics that the soft knit fetishist adores.