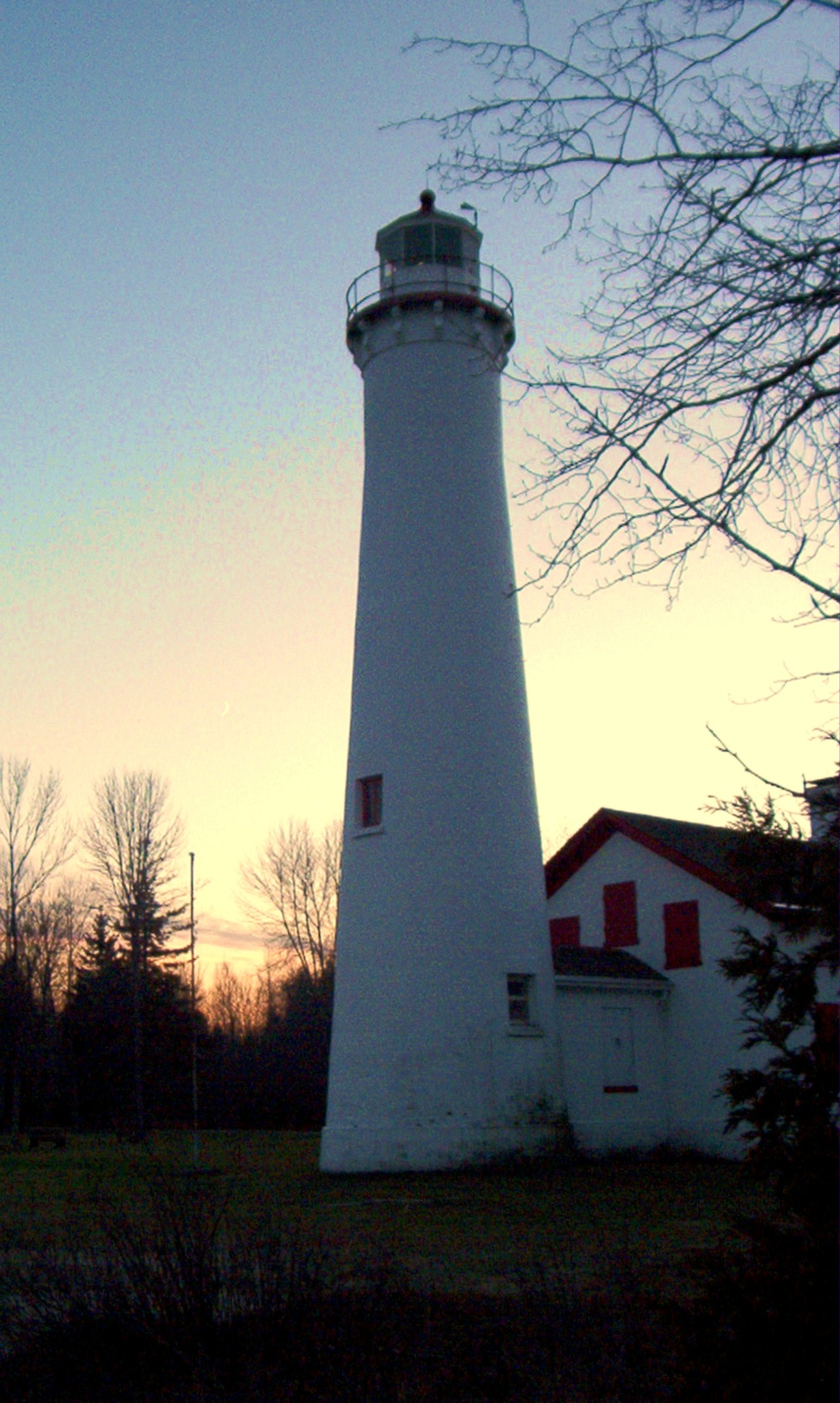 The Sturgeon Point Light Station is a on in Alcona County, northeastern lower Michigan. Established to ward mariners off a that extends 1.5 miles (2.4 km) lakeward from Sturgeon Point,

The light station was built in 1869 by the . The Board was in the midst of a lighthouse building boom on the Great Lakes due to increased maritime traffic, and in response to a large number of lost ships and men: Congress approved 70 lights on the western Great Lakes in thirty years: 28 in the 1850s, and 21 in each of the following decades. [ [http://www.terrypepper.com/lights/lists/year-estab.htm Establishment years of western Great Lakes Lights, Terry Pepper, Seeing the Light,] ] [""See also" the chronology at "cite web|url=http://clarke.cmich.edu/lighthouses/index.htm |author= Wagner, John L. |title="Beacons Shining in the Night: The Lighthouses of Michigan" | publisher=Clarke Historical Library, Central Michigan University] The location is roughly halfway between Alpena's and the northern entry to . Importantly, this point sits atop a formidable reef that is an imminent hazard to navigation. Moreover, the area north of Sturgeon Point and south of is a bay that can provide shelter from northerly and southerly winds and waves. Historically, this area is locally known as "Sanctuary Bay." The Lighthouse Board further recognized that being able to navigate close to (but not over) the reef and the point would aid transport into and out of Saginaw Bay. [ [http://www.terrypepper.com/Lights/huron/sturgeon/index.htm Seeing the light, Terry Pepper on Sturgeon Point Light Station.] ] It is made of on a foundation.

The light began its service with a sixth-order (pronounced [freɪ'nel] ) which was upgraded to a 3.5-order lens (that was originally installed at ), twenty years later. In 1876, the light station was joined in its service by an adjacent station. [ [http://www.theenchantedforest.com/AlconaHistoricalSociety/ Alcona Historical Society/Sturgeon Point Light Station website] ]

In 1939 the U.S. Lighthouse Service also merged under the control of the U.S. Coast Guard. In the same year the station was electrified and automated. [ [http://www.terrypepper.com/Lights/huron/sturgeon/index.htm Seeing the Light, Terry Pepper on Sturgeon Point Light Station.] ]

By the 1940s, the light was fully automated, and the Coast Guard withdrew all personnel in 1941 and thereafter dismantled the life-saving station. The lifesaving bell was purloined in 1941, and was "anonymously returned" in 2002 to the custody of the Alcona County Historical Society (according to a plaque at the light). The building was torn down. [ [http://www.terrypepper.com/Lights/huron/sturgeon/index.htm Seeing the light, Terry Pepper on Sturgeon Point Light Station.] ] The brick outhouse, built in 1869, remains, however. [, [http://www.nps.gov/history/maritime/light/sturpt.htm Inventory of historic light stations, Sturgeon Point.] [http://www.michiganlights.com/sturgeonpointlh.htm Michigan Lighthouse Conservancy on Sturgeon Point Light.] ]

The keeper's house itself fell into disrepair until it was taken over by the Alcona Historical Society in 1982.

The 3.5 Order is still in place and in use. This is one of at least six Fresnel lens that remain in use on the Great Lakes. ["See," [http://www.nps.gov/history/maritime/nhl/grossept.htm National Park Service Maritime Light Inventory, Grosse Point Light study] which erroneously disregards Sturgeon Point and (which has its original lens), and proffers a count of "fourremaining lenses -- it lists them -- on the Great Lakes. However, if may be that the article is only intending to list lights that have "their original lens in situ", and by that definition, Sturgeon Point would not be on the list, as it has a replacement lens, the original having been replaced by a larger lens in 1889.]

*At the time of the light station’s construction, the Alcona County region hosted an active commercial fishery. was also in the midst of a timber boom, during which wood products were shipped to markets over Lake Huron from nearby ports at Harrisville, Alcona, and Black River. Despite the later addition of agricultural produce to the cargoes shipped by lake from the region, by the early 20th century the Sturgeon Point Light primarily served passing vessels engaged in the bulk trade, which did not stop at nearby ports.
*Sturgeon Point is one of 149 lighthouses in Michigan. Michigan has more lighthouses than any other state. See .
*In the Big Blow of 1913, two of three ships that had the most crew lost, 28 victims each, were thereafter reported to have gone down in the area near Sturgeon Point. Those ships are the John A. McGean [ [http://www.pointeauxbarqueslighthouse.org/preserve/shipwrecks/mcgean.cfm Thumb Shipwreck Preserve, John A. McGean.] ] and the Isaac M. Scott. [ [http://www.nedivenews.com/?q=node/161 Northeast dive news, Isaac M. Scott.] ] See also, and . However, the better evidence suggests that the McGean is in fact 9.5 miles due east of , which is on the east side of Michigan's Thumb. [ [http://www.lakeshoreguardian.com/_2003/122003/sunkenhistory.php The Lakeshore Guardian :: December 2003 :: Sunken History ] ] The Scott was first discovered in 1976, and is laying on the bottom about 7.5 miles northeast of . [ [http://www.nedivenews.com/?q=node/161 Northeast dive news, Isaac M. Scott.] ]

Ownership was transferred from the Coast Guard to the under the terms of the , and operations are maintained by the Alcona Historical Society.

During the planning stages of the , the Sturgeon Point Light was proposed to mark the southernmost extent of the sanctuary,

Although the continues to operate the light, the property has been transferred to the under the terms of the . The transfer from the Department of the interior was effective May, 2005. [ [http://www.doi.gov/news/050526.htm Department of Interior News Release.] ] The Alcona Historical Society operates a museum in the restored historic buildings. The Sturgeon Point Light was added to the in 1984.

In 2006, the U.S. Coast Guard sought to forever darken the light, and in fact shut it off for a short time. Resistance to the initiative developed, and over five thousand signatures were collected on petitions to "Save Our Light." [ [http://www.unc.edu/~rowlett/lighthouse/miel.htm The Lighthouse Directory Lighthouses of the Eastern Lower Peninsula, including Sturgeon Point.] ] Numerous public comments were submitted as part of the regulatory process. In due course, an arrangement was made whereby the light was left on (albeit with its operating expenses to be paid by the Alcona County Historical Society) and it was designated as an official "seasonal private aid to navigation." from April 1 through November 1. [ [http://www.navcen.uscg.gov/LNM/d9/lnm0901.pdf Department of Homeland Security announcement to mariners re Sturgeon Point light change in status, 01/07.] ] The Coast Guard reversed course after the public pressure, and the light will remain on. [ [http://www.lighthousedepot.com/lite_digest.asp?action=get_article&sk=02622&bhcd2=1211292732 Sturgeon Point to remain on, Lighthouse Depot.] ]

A transfer of ownership of the light itself, from the Coast Guard to the Michigan Department of Natural Resources, is pending in 2008 under the terms of the .

Events at the Lighthouse and Museum

* The lighthouse is maintained and operated by the , a private organization that funds the maintenance and operation with few public funds. The Society is in the process of raising contributions to renovate and paint the lighthouse. [ [http://www.theenchantedforest.com/AlconaHistoricalSociety/ Alcona Historical Society] ]
* The tower is regularly open during the summer for climbing by the public (for a small fee to cover insurance costs). The museum is open to the public, and is supported by donations.
* On the grounds is the Old Bailey School, a 1907 house, which was moved there from in 1998.

From Alpena, take , turn left onto Alcona Road, and follow it down the hill for 1.1 miles to Lakeshore Drive; turn right on Lakeshore Drive for 3.2 miles and turn left on Point Road. Sturgeon Point Lighthouse is a mile down on the left hand side.