Chicago Pile-1 (CP-1) was the world's first nuclear reactor.[4] CP-1 was built on a rackets court, under the abandoned west stands of the original Alonzo Stagg Field stadium, at the University of Chicago. The first self-sustaining nuclear chain reaction was initiated in CP-1 on December 2, 1942. The site was designated a National Historic Landmark in 1965 and was added to the newly created National Register of Historic Places a little over a year later. The site was named a Chicago Landmark in 1971. It is one of the four Chicago Registered Historic Places from the original October 15, 1966, National Register of Historic Places list.[3] 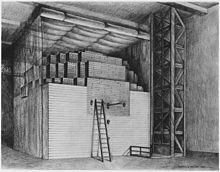 Drawing of the reactor

The reactor was a pile of uranium and graphite blocks, assembled under the supervision of the renowned physicist Enrico Fermi, in collaboration with Leó Szilárd, discoverer of the chain reaction. It contained a critical mass of fissile material, together with control rods, and was built as a part of the Manhattan Project by the University of Chicago Metallurgical Laboratory. The shape of the pile was intended to be roughly spherical, but as work proceeded Fermi calculated that critical mass could be achieved without finishing the entire pile as planned.[5]

A labor strike prevented construction of the pile at the Argonne National Laboratory, so Fermi and his associates Martin Whittaker and Walter Zinn set about building the pile (the term "nuclear reactor" was not used until 1952) in a rackets court under the abandoned west stands of the university's Stagg Field.[6] The pile consisted of uranium pellets as a neutron-producing "core", separated from one another by graphite blocks to slow the neutrons. Fermi himself described the apparatus as "a crude pile of black bricks and wooden timbers." The controls consisted of cadmium-coated rods that absorbed neutrons. Withdrawing the rods would increase neutron activity in the pile, leading to a self-sustaining chain reaction. Re-inserting the rods would dampen the reaction.

Reunion photo from 1962 of most of the scientists who participated with Fermi on CP-1. From the University of Chicago Photo Archives.

On December 2, 1942, CP-1 was ready for a demonstration. Before a group of dignitaries, a young scientist named George Weil worked the final control rod while Fermi carefully monitored the neutron activity. The pile reached "criticality" or a self-sustaining reaction at 3:25 p.m. Fermi shut it down 28 minutes later.

After the first self-sustained nuclear chain reaction was achieved, a coded phone call was made by one of the physicists, Arthur Compton, to James Conant, chairman of the National Defense Research Committee. The conversation was in impromptu code:

Unlike most reactors that have been built since, this first one had no radiation shielding and no cooling system of any kind. Fermi had convinced Arthur Compton that his calculations were reliable enough to rule out a runaway chain reaction or an explosion, but, as the official historians of the Atomic Energy Commission later noted, the "gamble" remained in conducting "a possibly catastrophic experiment in one of the most densely populated areas of the nation!"[8]

Operation of CP-1 was terminated in February 1943. The reactor was then dismantled and moved to Red Gate Woods, the future site of Argonne National Laboratory, where it was reconstructed using the original materials, plus an enlarged radiation shield, and renamed Chicago Pile-2 (CP-2). CP-2 began operation in March 1943 and was later buried at the same site, now known as the Site A/Plot M Disposal Site.[5]

The site of the first man-made self-sustaining nuclear fission reaction received designation as a National Historic Landmark on February 18, 1965.[1] On October 15, 1966, which is the day that the National Historic Preservation Act of 1966 was enacted creating the National Register of Historic Places, it was added to that as well.[3] The site was named a Chicago Landmark on October 27, 1971.[2] A small graphite block from the pile is on display at the Museum of Science and Industry in Chicago; another can be seen at the Bradbury Science Museum in Los Alamos, NM. The old Stagg Field plot of land is currently home to the Regenstein Library at the University of Chicago. A Henry Moore sculpture, Nuclear Energy, in a small quadrangle commemorates the nuclear experiment.[1]