Palermo is a neighborhood, or barrio of the Argentine capital, Buenos Aires. It is located in the northeast of the city, bordering the barrios of Belgrano to the north, Almagro and Recoleta to the south, Villa Crespo and Colegiales to the west and the Río de la Plata river to the east. With a total area of 17.4 km2 (7 sq mi), Palermo is the largest neighborhood in Buenos Aires. As of 1991 it had a population of 256,927 inhabitants (1991 census [INDEC]). It is the only barrio within the administrative division of Comuna 14.

In an alternative history of the name, a folk story supported by journalists, the land would have been originally purchased by an Italian immigrant named "Juan Domingo Palermo" in the late 16th century, shortly after the foundation of Buenos Aires in 1580. Juan Manuel de Rosas built a country residence there which was confiscated after his fall in 1852.

The area grew rapidly during the last third of the 19th century and particularly during the presidency of Domingo Faustino Sarmiento, responsible for the creation of the Buenos Aires Zoological Gardens and the "Parque Tres de Febrero" in 1874, and "Plaza Italia" and the Palermo Race Track in 1876, all on the grounds of what had been Rosas' pleasure villa. 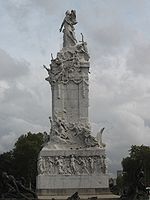 Monument to Argentina. Raised by the Spanish community in 1910, it is commonly referred to as the "Spanish Monument"

Although appearing as one big swath on the official map, Palermo can be subdivided into several contrasting and acutely individual parts, the most clearly delimited of which may be considered further de facto neighborhoods of Buenos Aires.

Alto Palermo is downtown Palermo, the main shopping area and transport hub around Santa Fe Avenue. At its core is the Alto Palermo Shopping Centre, a large shopping mall at the eastern-most edge of Palermo, bordering Recoleta. Villa Freud, based around Plaza Güemes, is a residential area known for its high concentration of psychoanalysts and psychiatrists, hence its name.

Palermo Viejo (Old Palermo) is, as its name implies, the oldest part. It runs from Santa Fe Avenue south to Córdoba Avenue, and from Avenida Dorrego east to Coronel Díaz Street. The neighborhood is centred on Plaza Palermo Viejo and reflects an older Spanish style in architecture, often "recycled" with modern elements. Such well-known figures as Jorge Luis Borges and Che Guevara once lived in this ward and indeed Borges first wrote poetry in the then quiet barrio. Borges's poem "Fundacion mitica de Buenos Aires" names a typical square (bordered by streets Guatemala, Serrano, Paraguay, Gurruchaga) adjacent to his childhood home, a popular tourist landmark. It was historically a residential area, popular with communities from Poland, Armenia, Ukraine and Lebanon and old Spanish and Italian families, whose traditions are reflected in local restaurants, churches, schools and cultural centres.

Palermo Soho is a small area of Palermo Viejo around Plaza Serrano (officially Plazoleta Cortázar) on Serrano near Palermo's south-western edge. It is a newly fashionable area for fashion, design, restaurants, bars and street culture. The atmosphere in many cafés and restaurants strives to be "alternative", which makes this area of the city especially popular with young, upper-middle class Argentines as well as foreign tourists. The traditional low houses have been adapted into boutiques and bars, creating a bohemian feel. The square has a crafts fair.

In the mid-nineties a number of TV and Radio producers installed themselves in the area between Córdoba, Santa Fe, Dorrego and Juan B. Justo Avenues in Palermo Viejo. For that reason this part of the neighborhood began to be called "Palermo Hollywood". Presently, it's best known for the concentration of restaurants, clubs -as Club Atlético Palermo, the oldest one[2]-, cafés and an active nightlife.

The most upmarket part of Palermo, "Palermo Chico" ("Small" or "Exclusive" Palermo), is on Palermo's north-eastern edge, across Figueroa Alcorta Avenue and between San Martín de Tours and Tagle streets. The National Museum of Decorative Arts is located in Palermo Chico, in a dazzling old palatial home. Neighbouring "Barrio Parque" is strictly a residential area, laid out in winding streets by Carlos Thays; many of the wealthy and famous own homes in this section. Once a quarter full of splendid mansions set in broad private parks, many luxury condominiums and apartment houses are now to be seen. MALBA, the Museum of Latin American Art in Buenos Aires, is located between Barrio Parque and the Paseo Alcorta shopping centre.

Las Cañitas was a tenement district early in the twentieth century; but it has since become an upmarket area of high-rises, restaurants and bars next to the Campo Argentino de Polo, in the northern half of Palermo. The King Fahd Islamic Cultural Center was built in the 1990s nearby the Polo fields.

The "Bosques de Palermo" (Palermo Woods) as is popularly known, officially "Parque Tres de Febrero", is located on the north-east side of Palermo. It was inspired by the "Bois de Boulogne" in Paris and the Prater (or Vienna Meadow) in Vienna. It is the largest green area in the city of Buenos Aires.

Panoramic view of Las Cañitas, the "Bosques de Palermo" (Palermo Woods), are in the foreground