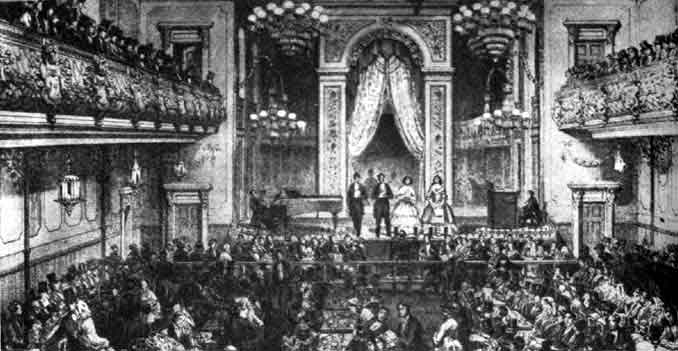 The theatre was constructed on the site of the "Six Cans and Punch Bowl Tavern". The licensed victualler of the premises, Henry Weston had already transformed the former "Holborn National Schoolrooms" into a music hall several years before

The theatre was renamed the "Royal Music Hall" in 1868, and then changed names again in 1892, becoming the "Royal Holborn Theatre of Varieties". So successful was it in that decade it began to rival Morton's Canterbury Theatre, which was the most popular and profitable in London.

The hall's early and most influential years were presided over by an exacting chairman and master of ceremonies, W. B. Fair, famous for the song "Tommy, Make Room for Your Uncle"

The theatre became moribund at the beginning of the 20th century, but was rescued by George Cray, with sketches such as "The Fighting Parson".

In 1906, the theatre auditorium was remodelled by at a cost of £30,000, and was renamed the Holborn Empire [ [http://library.kent.ac.uk/library/special/icons/playbills/HOLBORN.HTM Theatre Collection at the University of Kent] accessed 13 Oct 2007] , becoming a part of the group, remaining as the last surviving in the West End [ [http://www.20thcenturylondon.org.uk/server.php?show=ConObject.4715&objImageIndex=2 Museum of London] accessed 31 Mar 2007] , also performing special theatrical matinees.On , a long brewing dispute between artists, stage hands and managers of the theatres came to a head at the Holborn Empire. The artists, musicians and stage hands went on strike. Strikes in other London and suburban halls followed, organised by the Variety Artistes' Federation. The strike came to be known as the "Music Hall Wars", and was against the conditions imposed by the managers. These included sole rights to a star and the ability to include additional matinee performances in the schedule without pay, or notice. Eventually the managements were forced to give in, in the face of solidarity by major stars like , and additional payments for matinee performances were introduced [ [http://www.peopleplayuk.org.uk/guided_tours/music_hall_tour/the_story_of_the_music_halls/strike.php "Music Hall Strike of 1907" (Theatre Museum London)] accessed 15 Nov 2007] .

The building was hit the following night by another bomb and too badly damaged to reopen. It was finally pulled down in 1960.